KFC is Testing Out a Cheetos Sandwich 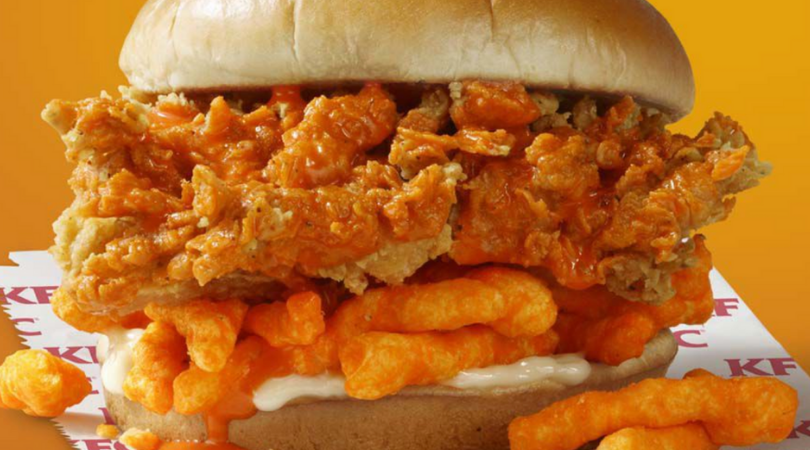 For the last two decades or so, fast food restaurants have, if they’ve been looking to get themselves lots of attention, followed one of two different branding options. Some have rebranded themselves as more upscale — with better and fresher ingredients, nicer dining areas, or healthier options (think Hardees/Carl’s Jr., Dominos, Papa John’s, Shake Shack, Wendy’s, and McDonald’s). Or, they’ve doubled down, hard, on being gross (Taco Bell, Burger King, Pizza Hut, and KFC).

Unsurprisingly, most of the brands that have leaned (quite admirably) into being gross are Yum! Brand restaurants. Whether it’s Pizza Hut shoving anything even remotely edible into its pizza crusts, Taco Bell creating new Mountain Dew flavors and daring you to guess how their food can be so cheap but so hugely portioned, or KFC replacing bread with fried chicken on its Double Down “sandwich”, Yum! knows how to get real gross, real good.

Enter the Cheetos Sandwich. Relatively tame by KFC standards, this beauty of a chicken sandwich boasts a fried chicken breast, a special Cheetos sauce, a layer of crunchy Cheetos, mayo, and nothing even remotely resembling a vegetable.

The new Cheetos Sandwich will be available in Winston-Salem and Raleigh, North Carolina, Richmond and Roanoke, Virginia, Greenville, South Carolina, and parts of Georgia.

Frankly, this feels like a bit of a half-assed attempt by KFC. They’re just throwing Cheetos under a chicken breast? That’s it? Some Cheeto breaded fried chicken would have been way more hardcore. KFC has mac n’ cheese on the menu, why not mac n’ Cheetos? Mountain Dew clearly has a lucrative partnership with the Yum! family of restaurants, why not flex on the world by presenting it with Cheetos flavored Mountain Dew, available only at KFC. Can you imagine the press for that? It would give Whole Foods shoppers panic attacks, which is I assume, in a roundabout way the goal of the KFCs, Pizza Huts, and Taco Bells of the world.

The Cheetos sandwich will suffice for now, but at some point I expect KFC to step it up. Free idea for the Colonel here: a sort of Cheeto based foie gras taken to trailer park levels of arterial devastation. Feed a whole farm of chickens nothing but Cheetos from birth until their slaughter. Then, marinate them in the Cheetos sauce, bread the meat in Cheetos, fry it, and then slather it in more Cheetos sauce. Grab two buns made from ground Cheeto flour, slap that Cheeto infused chicken between them with mayo and whole Cheetos as a topping. Then grab some lettuce and just throw it in the trash. And when the customer sits down to eat this neon orange Frankenstein, boom, there’s a salt shaker full of Cheeto dust waiting for them on the table. They can use to either dust their sandwich with or to simply pour on the table, chop up, and do lines of. That is how you make food with Cheetos. Step your game up, KFC.

Watch: Our 10 Juicy Picks for the Best Fried Chicken in Texas