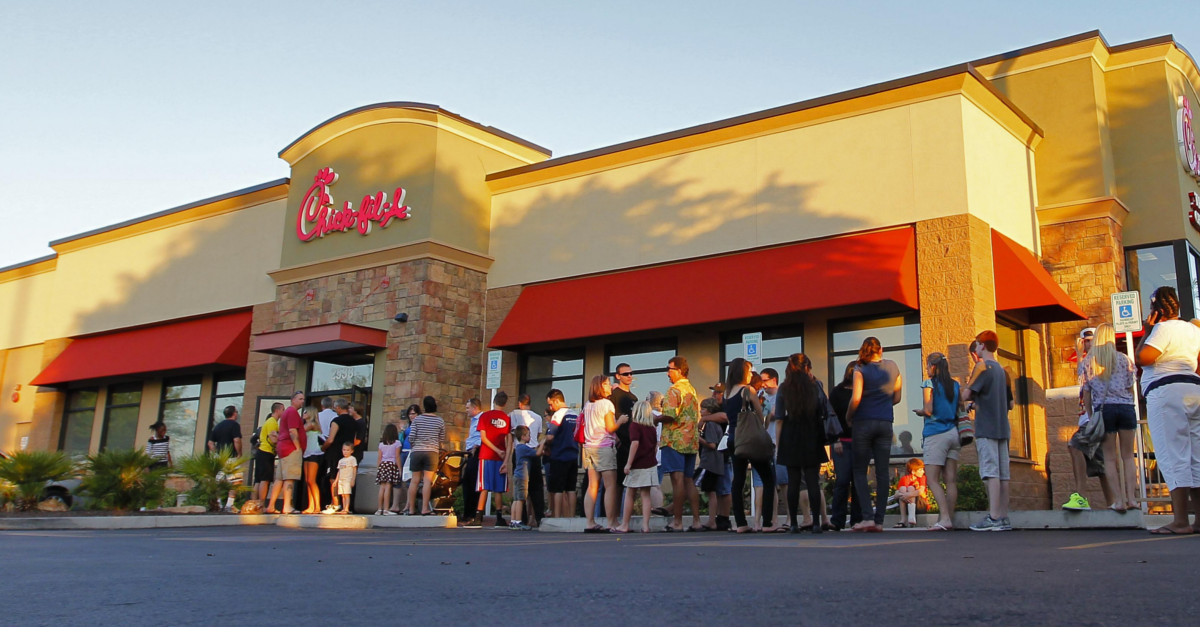 Chick-fil-A has announced it will stop all donations to several Christian organizations after receiving heavy backlash from LGBTQ rights activists over the last several weeks. The fast-food chain stated that as it is expanding, it will no longer donate to the Fellowship of Christian Athletes, and the Salvation Army which opposes homosexuality and same-sex marriage.

The announcement comes after it was revealed that the Chick-fil-A Foundation, which is the company’s charity, has donated millions of dollars to several religious and anti-LGBTQ organizations, including the two mentioned. In 2018, the foundation donated a total of $1.65 million to the FCA and $115,000 to The Salvation Army.

Through a statement, a representative for Chick-fil-A stated, ?We made multi-year commitments to both organizations and we fulfilled those obligations in 2018.? The chain will now focus on its charitable donations on ?education, homelessness, and hunger.?

It shouldn't have taken this long #ChickFilA pic.twitter.com/jmi325UKmW

Chick-Fil-A is also expected to donate close to $9 million to charities including Covenant House International, Junior Achievement USA and donate $25,000 to a local food bank for each new restaurant that the company opens. President and chief operating officer of Chick-fil-A, Tim Tassopoulos, release a statement in regards to these organizations, noting, “No organization will be excluded from future consideration ? faith-based or non-faith-based.”

Editors Note: This post was originally published on March 22, 2019. It was updated on November 19, 2019, after Chick-Fil-A announced it would end donations to The Salvation Army and the Fellowship of Christian Athletes (FCA) who were criticized for being anti-LGBTQ.

It looks like Chick-fil-A is once again in the spotlight, for the same exact reason they were in 2017. The privately owned chain is being boycotted around the United States, for their continued contribution of millions of dollars to organizations with anti-LGBTQ agendas, after it originally promised not to a few years back. This according to newly released tax filing obtained by ThinkProgress.

The chain, which is long associated with anti-LGBTQ causes, publicly pledged not to have any part of a political or social agenda after billionaire CEO, Dan Cathy, sparked outrage and a boycott in 2012 after publicly decrying gay marriage. In 2017, according to their most recent tax filing available, the company donated $9.9 million to charity, of which $1.8 went to three groups that are known to discriminate against LGBTQ people.

Reports showed Chick-fil-A gave nearly $1.65 million to an organization called the Fellowship of Christian Athletes. Per their website, the cash donated funded “sports camp and school programs for inner-city youth.” How is this an organization against the LGBTQ community? Well, the group requires camp leaders to sign a “statement of faith” prior to being admitted. The nine-point contract included a “sexual purity statement” prohibiting heterosexual sex outside marriage, and any homosexual act overall. A second requirement on the contract stated that “marriage is exclusively the union of one man and one woman.” So yeah, triple yikes.

Just a reminder that chick-fil-a donated $1.8 million to anti-LGBTQ groups in 2017
“it’s so good”
shouldn’t be a reason to support a fast food chain with shit values pic.twitter.com/Bkqmm9f7VI

Chick-fil-A’s defense, when the tax statements were released, was that the camp participants, unlike camp leaders, were not required to sign the pledge. But, let’s be real, that’s hardly an argument for giving a whopping $1.65 MILLION to the group, which preaches and harbors anti-gay sentiment.

The company has also donated $150,000 to the Salvation Army, a charity that had draw attention for its long history of anti-LGBTQ rhetoric. In 2012, the Salvation Army Media Relation Director told a group of “queer journalists” that gay people deserved death. If that doesn’t immediately want you to back away from the organization, I honestly don’t’ know what will. Luckily, The New York City Commission of Human Rights immediately charged the Salvation Army with discrimination again transgender patients at four of its substance abuse centers, because duh.

The third charity with LGBTQ policies that received funds from the chain, which has since been cut off, reportedly received a $6,000 donation in 2017 to the Paul Anderson Youth Home. The Youth Home, a Georgia based “Christian residential home for troubled youth”, teaches boys that same-sex marriage is a “rage against Jesus Christ and his values.”Chick-fil-A responded to the comments of anti-LGBTQ rights, saying they pulled back their donations after the youth home did not “meet Chick-fil-A’s commitment” to create a welcoming environment to everyone.

Agreed. I don’t eat Chick-Fil-A because I don’t want *my* money directed at the anti-LGBTQ causes corporate supports. I have no illusions that will drive them out of business, because their deep-fried hatred and bigotry is just too damned tasty.

So why is this a big deal, and why are people boycotting the restaurant known for their delicious chicken? Well, in 2012, after the Civil Rights Agents claimed Chick-fil-A had said it would not give any more money to anti-gay causes, the company declined to confirm whether or not it was true. So, the problem here isn’t whether they donated or not. Sure, it?s bad, really really bad, but what?s worse is that they continue to do so despite them saying they would stop.

So, in response to their, shall we call them confusing statements(?), several cities have now opted to stop selling Chick-fil-A in certain areas. A day after the announcement of their donations, City Council members from San Antonio, Texas,  banned the chain from opening up a store in the air hub at the San Antonio International Airport due to their ?bad behavior?. The city stated they were a place of compassion and did not have room in their public facilities for ?business with a legacy of anti-LGBTQ behavior?.

Despite the criticism, Chick-fil-A reps said they do have a fundamental code of conduct at each store, which is ?do unto others as you would have them do unto you.? The company released as treatment saying, ?The 140,000 people who serve customers in our restaurants on a daily basis represent and embrace all people, regardless of race, gender, ethnicity, sexual orientation or gender identity,? they continued. ?Our intent is to have a positive influence on all who come in contact with Chick-fil-A.?

To everyone who says “it’s just chicken and my money doesn’t make a difference” – stop supporting places that use your money to hurt you or the ones you love. Get some self respect. https://t.co/iV4YW8MqDG

As a Chick-fil-A fan, this is really traumatic and devastating to hear. Especially since the company is very well known around the United States. Ultimately, what they are doing is wrong, especially if they stated they would stop funding organizations that steal human rights from people. It’s shameful. LGBTQ organizations have fought so hard for their rights for so long, for a big company to take them back to step one and use their name for useless, hurtful power.

I?m just going to let the internet handle this one, and hope for the best. But know I’m on your side, interwebs.