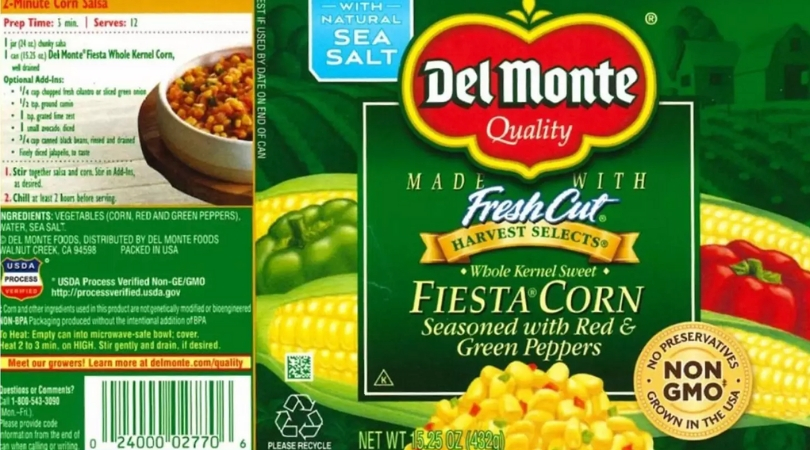 It seems like the recalls just keep on coming after Del Monte Food Inc has declared that there was a breach in their product. Del Monte has recalled more than 64,000 cans of fiesta corn seasoned with red and green peppers, stating it is under-processed and could result in contamination by spoilage organism or pathogens, leading to life-threatening illness if consumed.

The company announced that although it is more of a concern in home-canned food, the bacteria that causes botulism can be found in store-bought canned food, that has not been properly preserved, fermented or canned.

The US Centers for Disease Control And Prevention stated consuming food that is contaminated with botulinum toxin can cause botulism, which can ultimately be fatal. Symptoms of botulism usually begin six hours to 10 days after consumption, which causes muscles paralysis and weakness. The paralysis can lead to blurred vision, drooping eyelids, double vision, trouble swallowing and breathing and feels of dry mouth and thick tongue.

According to CDC, there were a total of 29 cases of foodborne botulism in the US in 2016. Fortunately, there have been no illnesses associated with the recalled corn reported this time around. The recall is for 64,242 cases that were distributed to 25 US states and in 12 countries including Barbados, Belize, El Salvador, Bermuda, Bahamas, Guyana, Haiti, Uruguay, Aruba, Panama, Suriname, and Saint Lucia.

If you have one of the recalled cans you can return it to the place of purchase or contact Del Monte for a full refund. Of course, it goes without saying that one should not consume the product. If consumed, you should contact your medical professional asap.

Watch: Is Candy Corn the Best Thing Ever or of The Devil?