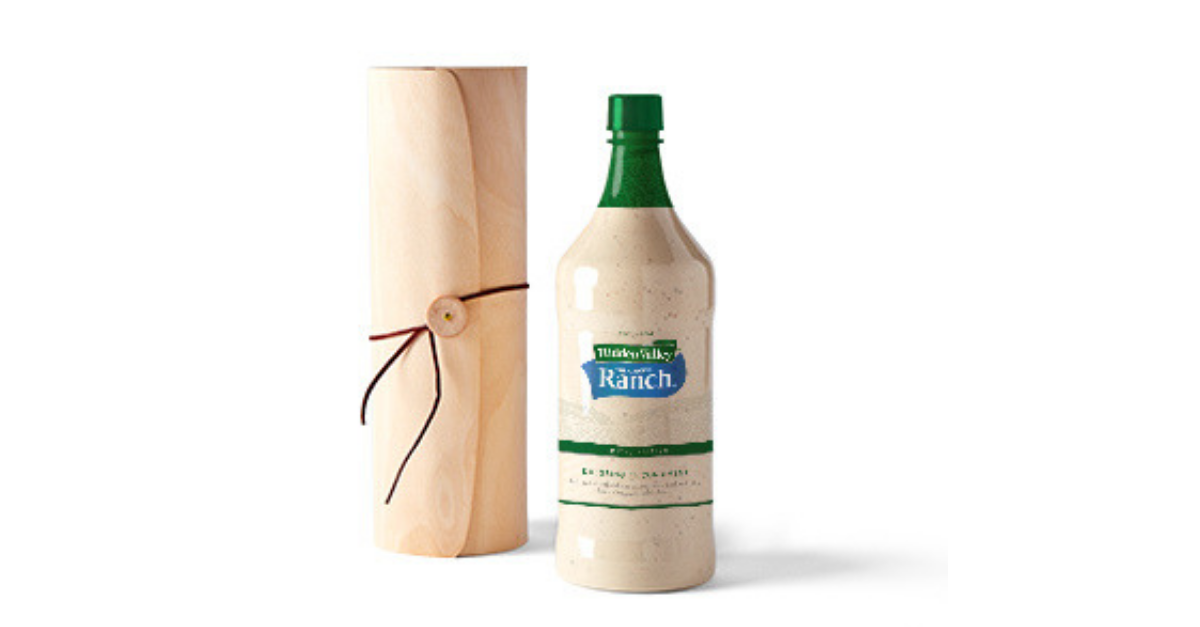 If you’re worried that this winter you won’t gain your traditional twenty pounds gorging on cookies, ham, eggnog, pie, leftovers, beer, and whatever weird special food your family likes to have for holidays, don’t worry — you can buy a whole half-gallon of ranch dressing from Hidden Valley to make sure you’re good and blubbered up for the winter.

Hidden Valley is selling a limited edition, magnum-sized bottle of ranch dressing for the holidays. It’s got enough sodium and fat to immediately send an Olympic swimmer into cardiac arrest. In fact, it’s not entirely clear that a ranch arm won’t burst forth from the bottle and rip your heart straight out of your chest, Temple of Doom style.

Though magnum technically means, “a large wine bottle having a capacity of two ordinary bottles or 1.5 liters (1.6 quarts)” you can’t help but get vaguely sexual vibes from having the moniker attached. Ranch is food lube — it’s the dip that comes with a veggie tray solely because it helps you force that stuff in — and overindulging in one of these bottles is absolutely going to punish your hole. This isn’t a double entendre, it’s a warning. Or a promise. Or an invitation. Or all three. It makes me sick. And intrigued.

The magnum bottle of ranch dressing goes on sale December 3rd and sells for $25. It also, apparently, comes unnecessarily classily packaged, which is like serving a tray of pizza rolls (ones that are microwaved, not even baked) on a silver platter.

Not a bad deal, all things considered. Think of all the foods you eat during the holidays that would be improved with ranch. Tamales, veggie trays, pigs in a blanket, literally everything else you eat that isn’t a dessert.

If you want to be the envy of your family and are from a Midwestern state, have one of these bad boys sitting in your fridge, already half empty, with a little ranch crust dribbled down the side. As is tradition.