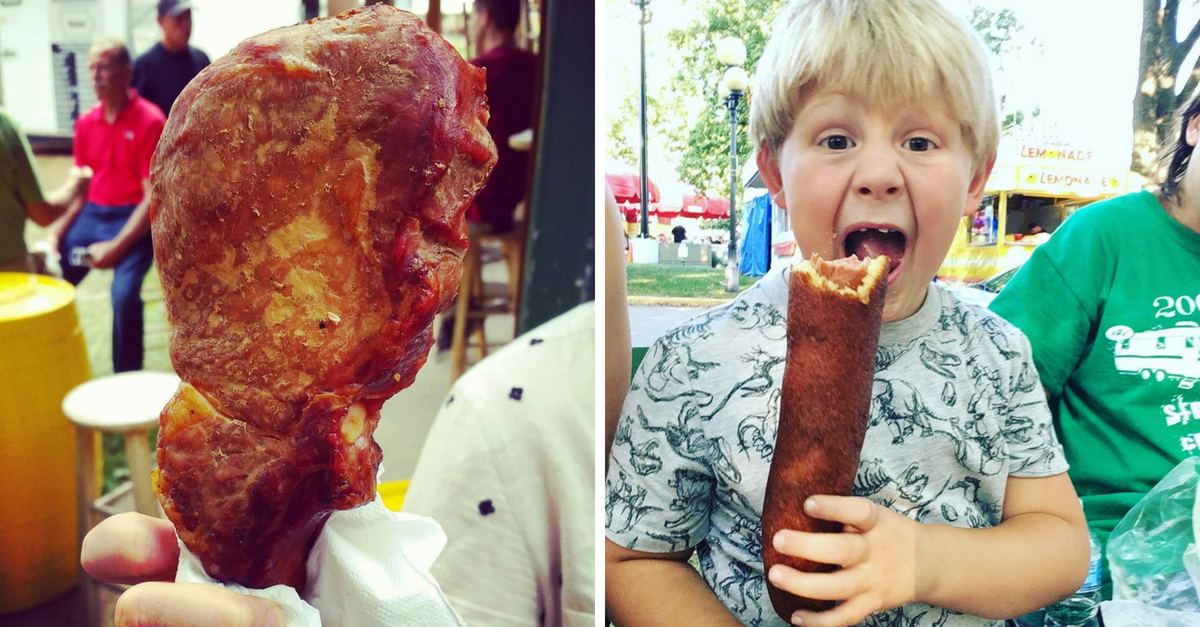 As legend has it, food on a stick became a popular staple at state fairs across the United States because of a dispute between carnival workers, or “Carnies,” and the state fair concession workers, or “Cessies” (pronounced sesh-ee-s), during the Georgia State Fair of 1908. Upset that they weren’t receiving enough of a cut of the money, jewelry, and children Carnies were conning or outright stealing from unsuspecting state fair attendees, sausage vendor Lazurus “Foot Meat” Johnson — so named for the animal meats he used in his sausages — offered an ultimatum to his Carnie brethren on behalf of the Cessies.

Either the Carnies recognize the importance of the role the Cessies and their fair food played in the carnival grifts — by offering liquor and encouragement to degenerate gamblers and, most importantly of all, serving greasy, hand-held foods with no silverware so that the hands of state fair attendees would be too slick to hit their mark in ring toss or properly wield the strongman sledgehammer, and what have you — or forever lose the allegiance of the Cessies.

The greedy Carnies, of course, declined Foot Meat Johnson’s proposal. In response, Johnson and the Cessies began to serve all of their foods on sticks, so as to keep the hands of the carnival game players clean, and allowing the state fair attendees a free hand to swat away the pickpockets, who owed a cut of all thieved items and money to the Carnies. To further wound the Carnies’ scams, a butter pie vendor by the name of Josiah Napkin began handing out rags with his meals so that customers could further clean their hands of grease and sauce before playing the Carnie games.

Read More: What (Maybe) Compelled Some Guy To Complain About Youths on Facebook

Carnie profits soon plummeted, and they begged Foot Meat Johnson, Josiah Napkin, and the other Cessies to stop serving their foods on sticks. Unfortunately for the Carnies, the new food on a stick was a hit with the people. Foot Meat Johnson became such a success that he started his own sausage company, known today as Johnsonville Bratwursts. Josiah Napkin, meanwhile, died of tuberculosis the next year, having never invented anything.

Pork chop on a stick, 2014. My all-time favorite #iowastatefair food. It's literally just a pork chop, but the best, unadulterated pork chop, grilled to perfection. The 'stick' is just the bone. A tiny splash of BBQ sauce and you're good to go. Oh, how I will miss this. It's the first time in 6 years that I won't be going to the Iowa State Fair–in my opinion, the greatest Midwestern gathering for food, agriculture and conviviality. (Sorry, Minnesota.) . . . #food #foodstagram #statefair #iowa #pork #onastick #isf2018

Anyway, all of that is made up, but it’s the story of food on a stick that I want to be true.

More importantly, though, Darren Rovell tweeted a list of all the food that will be served on a stick at the Iowa State Fair in Des Moines this year — 82 in total — and my God my heart is in pain just reading through this glorious list of impaled ice cream, cookie dough, and corn dogs.

The Iowa State Fair opens tomorrow and you can get 82 items on a stick… pic.twitter.com/9y3XXbraNV

Oh yeah. Give it all to me. If I were attending the Iowa State Fair, I would pretty much immediately inhale a cornbrat. Easily the best new food I’ve heard of. It makes so much sense but I have never thought of or tried it. Also, anything bacon-wrapped would be down my throat before I finished ordering it. Dessert-wise I’m all about that monkey tail a.k.a. a chocolate covered banana, though an apple eggroll doesn’t sound too bad either (except, you know, health-wise).

As far as weak spots on the list go, I’m as big of a fan of Caprese salad as the next guy, but on a stick? At a fair? Get the hell out of here. Nothing about that makes my heart quiver in anticipation of irreversible arterial blockage. Deep fry something that was already wildly unhealthy before the batter and grease or don’t come to play.