McDonalds Will Soon Start Selling Vegan ‘Chicken’ McNuggets, and We Have Mixed Feeling About It 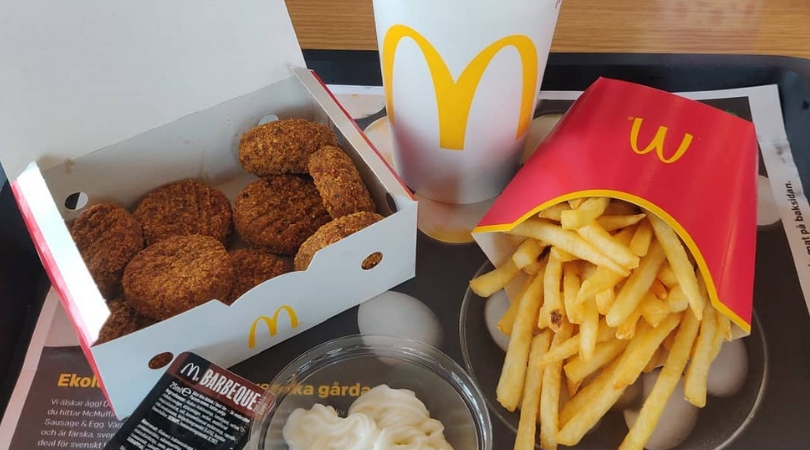 Okay, okay, listen up. I have nothing against vegans or vegetarians whatsoever. I used to be a vegetarian for 7 years before I began to eat meat again because of health reasons, so yeah, if there is a viable option for it to get a vegetarian meal easier for me, I’d take it. Hands down. But vegan nuggets at Mcdonalds? What kind of sorcery is that!?

Turns out largest fast-food chain restaurant in the world has decided to shake things up a little and try new vegan options at restaurants around the globe. The chain is now trying vegan “chicken” nuggets, beginning in Norway! According to a representative for the chain, the new chicken free McNuggets are made with mashed potato base, mixed with chickpeas, onions, carrots, and corn. They are then coated in breadcrumbs and fried until crispy. The vegan option is the latest in the series of vegan and vegetarian-friendly release, but for now, they are only available in Norway. So, if you want to try them, It might be worth a trip to explore the beautiful city.

But, surprisingly enough, this isn’t the first time Mcdonalds has tried to incorporate vegan and vegetarian options into their menus. Which is news to me. In January, Mcdonald’s also announced via Instagram that it had added a “McFalafel” to its menu in Sweden, and then came up with a vegan Happy Meal for children after they saw the huge amount of success with the Falafel which features a flour tortilla wrap filled with veggies.

Last night I tried the new McDonalds vegetable deluxe and was very pleasantly surprised by it! As with the old burger the mayo has to come off but I really liked the new flavour of the goujons although they were a bitch to keep in the bun 🙄 made myself some quorn chickn nuggets to go with it 🍟 #vegan #vegans #vegansofig #vegansofinstagram #crueltyfree #veganlife #veganliving #herbivore #plantbased #compassion #animalrights #veganfortheanimals #vegangirl #veganfood #veganrecipes #veganuk #veganbeauty #veganlifestyle #mcdonalds #veganmcdonalds

The wrap consists of breaded vegetable tenders, which are blended split peas, arborio rice, breadcrumbs, sun-dried tomato pesto and red peppers for each fried strip. The kid’s warp included ketchup and shredded lettuce, with the adult options features a spicy tomato relish, tomato, lettuce, and red onion. Let’s not forget about the first vegan burger, “McVegan” that was created in 2017. The soy-based burger received several “mouth-watering” reaction from those who weren’t vegan or vegetarian, which caused the company to make it a permanent menu that year.

As for the US? Well, headquarters in Chicago decided to launch a vegan burger in December of last year, offering to call it “McAloo Tikki”. It’s one of the chain’s best selling products in India. According to Chicagoans, the location offers a variety of international menu items, that are not necessarily found at most locations in the U.S.

📍 @mcdonaldsuk 'The Spicy Veggie One' (Red pesto veggie goujons with spicy relish, tomato, lettuce and red onion in a soft, toasted tortilla wrap) and large fries 🌯🍟🖤 ⠀⠀⠀⠀⠀⠀⠀⠀⠀ ⠀⠀⠀⠀⠀⠀⠀⠀⠀ ⠀⠀⠀⠀⠀⠀⠀⠀⠀ ⠀⠀⠀⠀⠀⠀⠀⠀⠀ 🚨 EDIT 🚨 McDonalds fries ARE vegan in the UK and they have dedicated dryers for veggie items. Quoting from the UK site “All of our fried [vegetarian] products from our fries to our vegetable patties are cooked in a blend of sunflower and rapeseed oil, and in separate vats from our chicken, beef and fish products.” ⠀⠀⠀⠀⠀⠀⠀⠀⠀ ⠀⠀⠀⠀⠀⠀⠀⠀⠀ #veganuk #veganbrighton #veganfoodshare #veganfood #vegan #instavegan #vegansofig #vegansofinstagram #whatveganseat #veganjunkfood #plantbased #meatfree #crueltyfree #eggfree #dairyfree #vegetarian #easyvegan #lazyvegan #mcdonalds #thespicyveggieone #veganwrap #veganmcdonalds #fries #veganuary #dirtygingervegan

The “Mcaloo Tikki” features veggie patty made from potatoes and peas, topped with red onion, tomato slices, and eggless tomato mayo. The Tikki is only available at the Chicago location, which is a shame because well, it actually sounds pretty great.

Now, with all those burger options, you would kind of expect them to have made the nuggets a while back. Although the nutritional information is not yet available, we can reassure that the vegan nuggets and fries contain mostly potatoes and vegetable oil. Which, you might want to avoid if you’re in a non-carbohydrates diet. But still, it would certainly be a good option for those who don’t always want to stick to a salad when come to eating at the chain restaurant.

My question here is, yeah sure, these vegan options provide fresh ingredients and non-meat products, but is there a special place where the chain can cook them? Speak to any vegan or vegetarian who hasn’t had meat for a few years, and they’ll tell you that even oil that has touched meat will make them sick. So vegan nuggets, yeah sure. Just make sure there is a designated area where workers are not’ mixing the products together. Because then, that’ll be a mess.