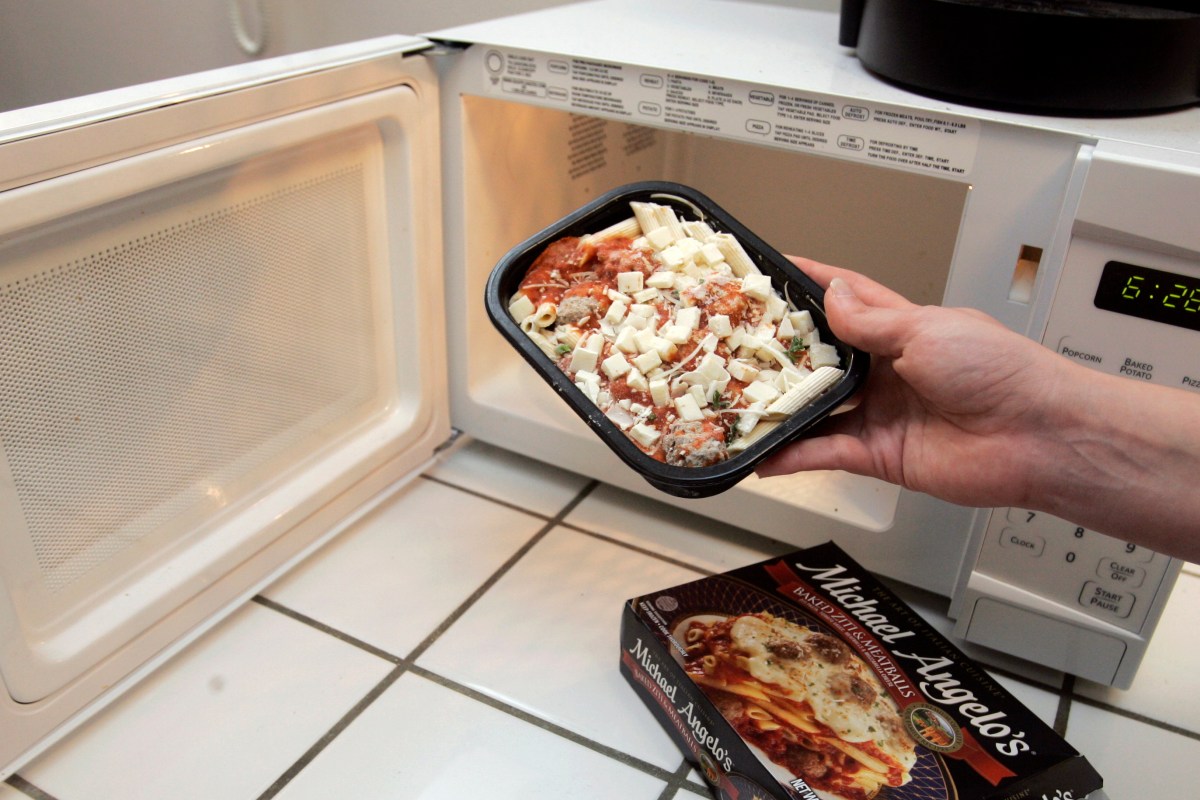 Abi Jones, of HeatEatReview.com, places a frozen food item for dinner and review into her microwave oven at her home in Palo Alto, Calif., Wednesday, March 5, 2008. (AP Photo/Paul Sakuma)

Reheating food in the microwave is a common kitchen ritual in modern America.

We all know about the dangers of reheating certain kinds of containers, but did you know that certain foods pose threats when you zap them for a second go-around?

Who knew you shouldn’t nuke chicken when it comes out of the fridge?!

According to U.K. newspaper The Mirror, reheating cold chicken a second time in the microwave causes the meat’s protein composition to change — and that can lead to digestive problems.

The way you store food before you even think about reheating it is incredibly important.

According to the Penn State College of Agricultural Sciences, potatoes can be a breeding ground for Clostridium botulinum (botulism) if they aren’t promptly refrigerated after you’re done eating them.

Thirty seconds in the microwave won’t kill botulism, so watch out.

Here’s another one where how you store the food before you reheat it can be problematic.

According to Britain’s Food Standards Agency (FSA), rice that is either left out for longer than an hour after cooking or hanging out in the fridge for longer than a day can create digestive distress for you.

RELATED: Betcha didn?t know your microwave can do these 10 amazing things

“Uncooked rice can contain spores of bacteria that can cause food poisoning. When the rice is cooked, the spores can survive,” the FSA notes. “Then, if the rice is left standing at room temperature, the spores will multiply and may produce poisons that cause vomiting or diarrhoea (sic). Reheating the rice won’t get rid of these poisons.”

The threat posed by eggs is not that popping them in the microwave somehow changes their protein structure or makes them toxic. Rather, it’s that you run the risk of having an upset stomach if you don’t heat them long enough.

What’s long enough? The Food and Drug Administration (FDA) says that eggs you’re reheating must reach an internal temperature of 165 degrees before they’re served. Unless you have a food thermometer, it’s wise to skip reheating eggs in the microwave altogether.

One other caveat about eggs: “Never leave cooked eggs or egg dishes out of the refrigerator for more than two hours or for more than one hour when temperatures are above 90° F,” the FDA warns. “Bacteria that can cause illness grow quickly at warm temperatures (between 40° F and 140° F).”

This warning pertains mostly to fresh mushrooms. According to the European Food Information Council (EFIC), it’s best to eat fresh mushrooms immediately after preparation because the proteins in mushrooms rapidly deteriorate.

The general consensus is that if you store the mushrooms you’ve prepared in the fridge for no more than 24 hours, it’s safe to eat them after they’re reheated to a temperature of 158 degrees.

Here’s one bright spot to report: There are no concerns at all about reheating industrial processed mushrooms, i.e. anything you get frozen, canned or dried.

This trio of veggies all have one thing in common: A high concentration of nitrates that can turn carcinogenic when reheated.

“Nitrate itself is totally harmless, but it can be converted to nitrites, and then to nitrosamines, some of which are known to be carcinogenic. Enzymes present in bacteria convert nitrate to nitrite,” the EFIC notes. “This happens especially when spinach is heated, stored and then later reheated. Nitrite itself is a harmless compound, but it should be avoided by infants of up to six months.”

RELATED: Finally, an excuse to NOT eat vegetables ? these 5 veggies aren?t all that good for you

The EFIC goes on to report that nitrite can hamper the hemoglobin in your blood from doing its job of carrying oxygen. Infants under six months are more prone to develop “Blue Baby Syndrome” as a result. So watch out, parents!

So how can you protect yourself and your family? There are four simple ways to stay safe when reheating food in the microwave oven: