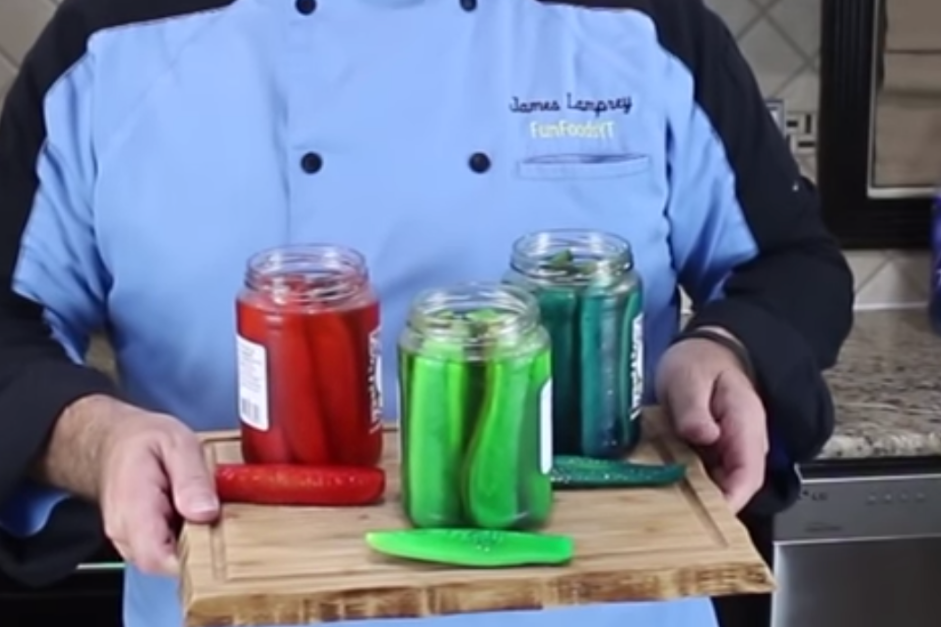 Have you ever bitten into a pickle and, with annoyed dissatisfaction, thought, “Yo! Why ain’t this green wang jackin’ me up!?!?!” If so, good news! Now your favorite gator knob looking snack can be pumped full of the fuel and Mountain Dew flavor that makes a Fortnite player both a champion and a diabetic.

This video from Fun Foods is a little tutorial on how to make these Dewckles. It’s not a pickle recipe you thought you’d ever see, but here it is nonetheless. A tangy, sweet, yummy, low carb… treat? It’ll confuse the hell out of your taste buds.

Mountain Dew pickles are here to blast a fat load of energy into your dumb, gaping, literal dill hole. Finally, you can get a deli sandwich with a side of Chrystal Meth for Kids. These aren’t your grandfather’s pickles. These are 21st Century energy rods. Little green rocket ships here to help you blast off with your favorite soda.

The Mountain Dew pickle concept is a variation on the (somehow) classic food staple Kool-Aid pickles. (It’s a southern thing.) It’s a simple recipe. It’s actually the exact same thing, except with Mountain Dew instead of Kool-Aid. It’s not the most exciting concept, and it seems pretty gross to me, but it’s harmless and some people like weird stuff, so whatever. If someone wants to eat this bizarre pregnancy craving of a snack, go for it. And it can be made with any flavor of Mountain Dew, including Mountain Dew Code Red.

What Other Drink or Food Combinations Can You Make with Dill Pickles?

Soaking pickles in things not related to pickles has become something of a fad lately, actually. There are moonshine pickles, whiskey pickles, vodka pickles, Tabasco pickles, and watermelon pickles just to name a few. Basically, if there is a liquid, pickles can absorb it and create some unholy combination of pickle and whatever liquid you combined it with.

Here are some new pickle ideas just for the hell of it.

This article was originally published December 18, 2018.

Watch: Would You Ever Try These Pickle Cupcakes?