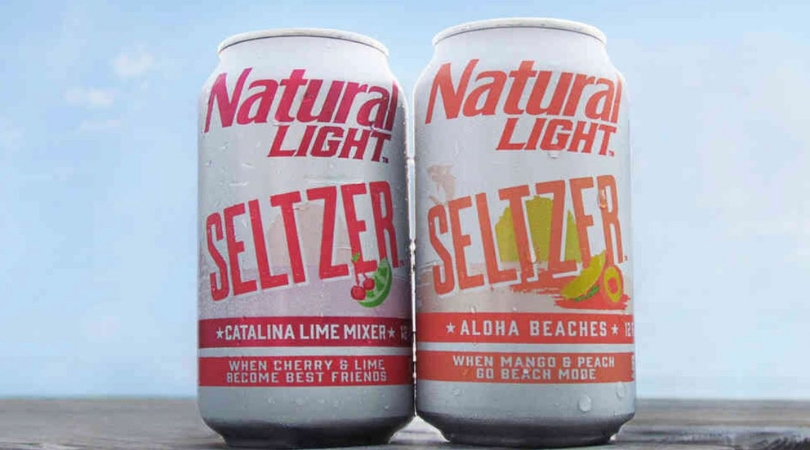 Calling all college students and 35-year-old’s who are still living their fraternity days. Summer just got a little bit better and a hell of a lot more blurry. It’s no secret that hard seltzer brands such as White Claw’s have been making their rounds this year. Heck, the whole seltzer market has been trending! They have managed to capture the hearts of many internet users and several drinkers, making it the “go-to adult beverage” due to their refreshing taste and calorie consciousness.

Well, time to put that black cherry can down, because I am here to introduce the next tailgate season craze. Say hello to the Anheuser-Busch Natty Light Seltzer. Yes, Natural Light has released the two newest members of their family: The Catalina Lime Mixer and Aloha Beaches. Because nothing yells Natural Light like a drink that will have you slurring your words after you chug one and smash the can against your head. Until it’s time to buy another four-packs to continue the party.

That's right, we made a f***ing seltzer.

Sharing it loud and proud on all their social media pages, Natty Light stated the flavors are Mango and Peach and Black Cherry and Lime and will be 133 calories per serving. Not that it matters because we all know that one Natty Light quickly turns into 8 for some. Although these are a few more calories than your regular 100 calories spiked seltzers, there is quite a good reason for it since they will make you hit the floor rather quickly after drinking two. Why? Well, not only are they 6 percent alcohol by volume rather than your regular 5 percent, but they will also be 20 percent cheaper than your regular seltzer.

So, let me break it down for you. Their ABV percent is higher and they will cost you less, meaning yes, it’s the ultimate dream come true for those die-hard Natty light drinkers going through heartbreak and want to get drunk before they can even remember their name. Ah, the wonders of alcohol. Truly amazing.

how about a Natural Light seltzer instead? Lol pic.twitter.com/lxNPQzDykp

The Natural Light Seltzer comes in 12 oz cans and 25 oz tallboys and will be launching in the United States in a few weeks. The 12 oz cans will come in 12 and 24-packs because we know that a party ain’t a party without Natty’s. I don’t know about you, but I can already hear the cries of joy from college kids around the nation. Forget White Claws and Mike’s Hard Strawberry Lemonade, now it’s all about Natty Seltzer.

So, are seltzers becoming the new light beer?Beer drinkers, time to step it up! Can’t wait for Michelob Ultra to joining the Seltzer party.

This article was originally published on August 12, 2019. It was updated on December 2, 2020, to remind you these tasty seltzers are still available and are perfect year-round!