A bar that lets you drink unlimited alcohol for an hourly rate? Pft, what can go wrong? People in St. Louis will definitely need Uber’s and Lyft’s to get home after a new open bar, Open Concept, celebrated its grand opening this week. Why is this bar so special? Well, apparently it has launched a $10 hourly all you can drink package. Which is exactly what it sounds like.

Not only that, but on Saturday it also plans to serve bottomless mimosas unlimited bellinis, and a buffet brunch for $20 an hour. Genius? Yes, of course. Dangerous? DUH. Open Concept’s owner Michael Butler stated that the bar doesn’t necessarily sell drinks, rather time. Butler, who is the city’s official recorder of deeds, said he got the idea from his campaigns own fundraising parties.

He would hold events where he charged by the hour for admission and had an open bar. They had a lot of presale tickets online and created large batch drinks to cut costs. That’s when he came up with a great idea for a full-time Missouri bar that you know, resembled a wedding reception.

So, now anyone who visits the bar can basically just go up to the bartender, toss them a $10 bill and get absolutely hammered with unlimited shots of everclear and tequila, as well as the most expensive liquor you can find but can never afford for the regular price. There are a few steps you need to follow beforehand, though! You basically need to create a profile so you can receive a confirmation code That code is then used for drink orders, which allows bartenders to know better than to serve a customer more than one drink at a time. Ain’t nobody got time for alcohol poisoning.

A St. Louis bar called Open Concept gives you unlimited booze for $10 an hour. This sounds like a really bad idea. https://t.co/NZkmd9GMXa

This bar’s “top-secret” system will basically calculate the appropriate rate of consumption to keep everyone from passing out. Butler also noted that the bartenders will have to scan everyone’s driver’s license and use the person’s weight and height to ensure they are not drinking too fast. Which is ridiculous because some of my friends are way smaller than I am and they can out drink me at the bar any day. Still, good luck getting a woman to tell you her actual weight because we all know they’re gonna lie. But okay.

Open Concept currently serves a dozen different cocktails and has three specific beers on tap including Budweiser Select, Budweiser, and Bud Light. It also served Franzia red wine and white wine for you fancy pants out there. Just make sure you pace yourself because then you’ll never be allowed back in.

See, I told you it was like a wedding reception. I guess this one is a bit better though since you can basically make a fool out of yourself without your great great aunt Suzy judging you for grabbing another champagne glass. I wonder if they have Happy Hour. $5 for 30 minutes? 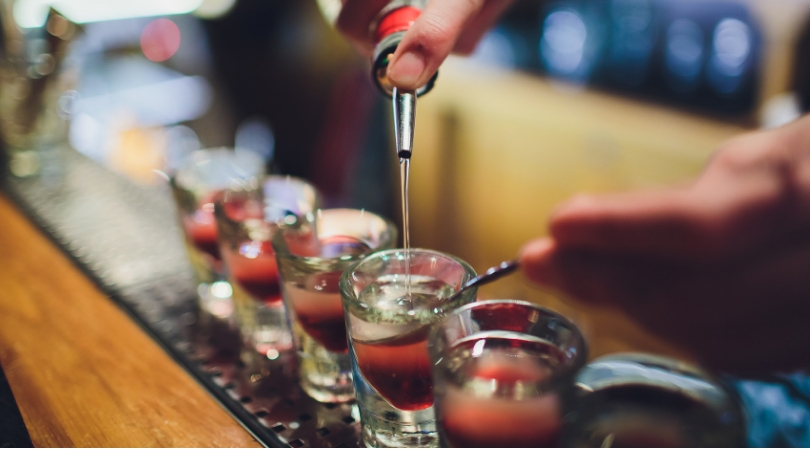