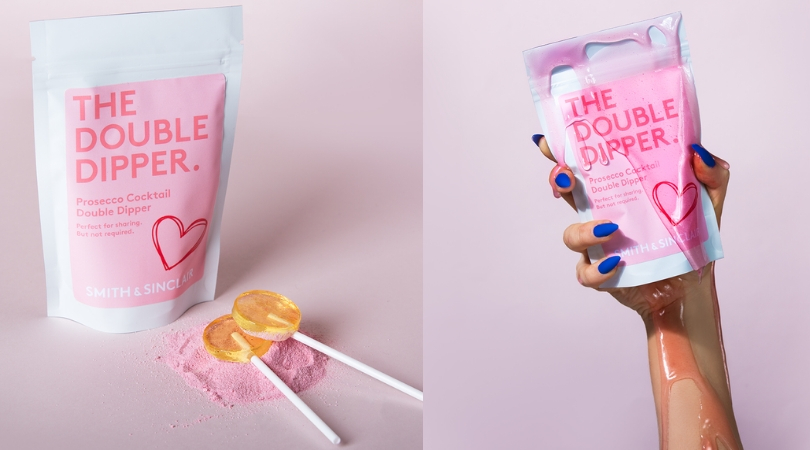 As if we needed another reason to hurt our liver, Smith & Sinclair has released their new Prosecco flavored lollipops and sweet sour powder all rolled into one. Now, our sugar rush will turn into a Happy Hour rush after their sweet treat is not only wine flavored but actually contains 10% alcohol.

Each ‘The Double Dipper’ package, which looks straight out of Valentine?s Day, comes with two Prosecco lollipops, some raspberry sherbert to dip them into and an alcohol-based peach gel that is paired perfectly with all the ingredients to give it that extra kick. A dream come true for someone with a sweet tooth.

Several users online have compared the Double Dippers to the popular English candy, Dib Dabs. Now, Dib Dabs are usually sold in the United Kingdom only, but they are very similar to our Fun Dips here in the United States. Expect these are actual lollipops and not sticks like we are used to. Honestly, I kinda like the idea of lollipops better, it makes it less sticky. The fizzy powder is still the same, though.

So, like everything else on the internet, you can buy a pack of these tasty suckers (pun intended) on Amazon for $8. The original Barratt flavor comes in a pack of 10 with Sherbet dip and a strawberry lollipop so you can bulk up if you feel like trying them out.

As far as the Prosecco ones, you?ll have to go to Smith & Sinclair’s website to order those. It?s definitely worth it though since their description of the products convinces you immediately. Surprisingly enough, they aren’t able to sell them to anybody under the age of 18,  because well, the legal age in the UK is 18. Even if it is only 10% alcohol.

I wonder how many lollipops it would take to get you tipsy?