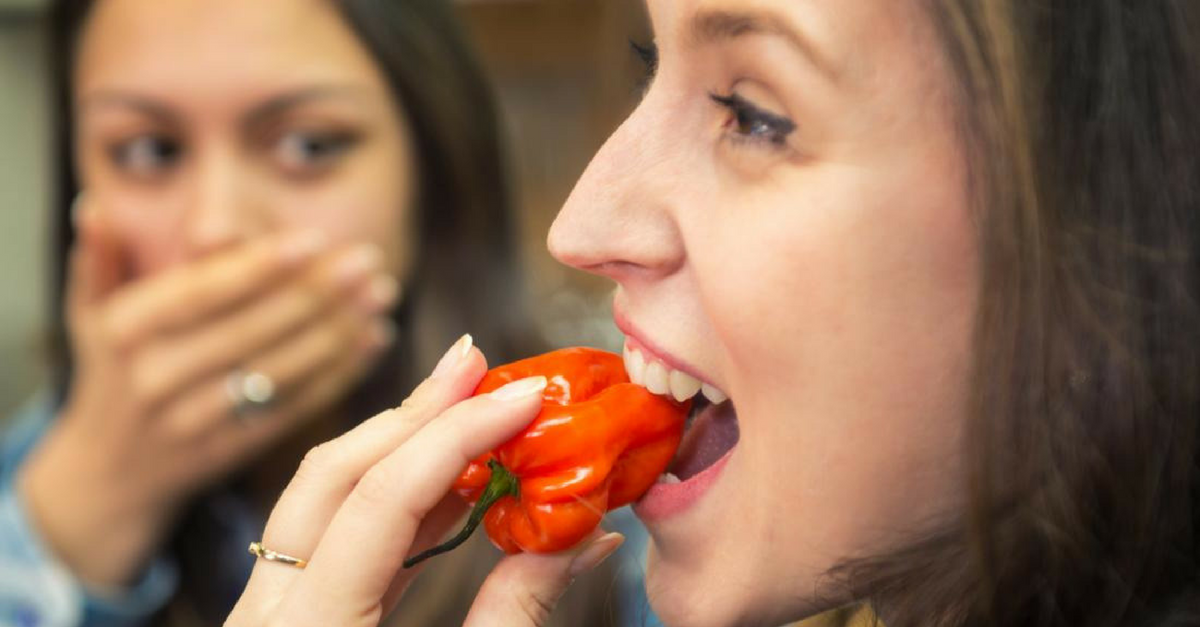 Don’t be afraid of that habanero hot sauce you see on the grocery store shelf, with its fitting bright orange glow, like the stomach punishing lava it is. It might look like pain in a bottle — because, to be fair, it absolutely is — but it’s also the key to living a long, happy-except-for-when-you’re-on-the-toilet, life.

As it turns out, the Fountain of Youth spits straight gasoline.

This is according to 23 years’ worth of data collected from over 16,000 Americans. The study showed that those people who were regular pepper eaters (excluding ground chili peppers) had a lower death rate (21.6%) than the flavor haters who were not (33.6%).

Here’s the more science-y version of that, from the conductors of the study themselves:

Our objective was to analyze the association between consumption of hot red chili peppers and mortality, using a population-based prospective cohort from the National Health and Nutritional Examination Survey (NHANES) III, a representative sample of US noninstitutionalized adults, in which participants were surveyed from 1988 to 1994. The frequency of hot red chili pepper consumption was measured in 16,179 participants at least 18 years of age. Total and cause-specific mortality were the main outcome measures. During 273,877 person-years of follow-up (median 18.9 years), a total of 4,946 deaths were observed. Total mortality for participants who consumed hot red chili peppers was 21.6% compared to 33.6% for those who did not (absolute risk reduction of 12%; relative risk of 0.64). Adjusted for demographic, lifestyle, and clinical characteristics, the hazard ratio was 0.87 (P = 0.01; 95% Confidence Interval 0.77, 0.97). Consumption of hot red chili peppers was associated with a 13% reduction in the instantaneous hazard of death.

SMH. Imagine living a life so short, and (literally and figuratively) without zest.

Though researchers weren’t exactly sure why eating peppers extended life, they believe it may have to do with capsaicin, which is the primary component of chili peppers. Capsaicin has a number of beneficial qualities for humans, including antioxidants, potential cardiovascular benefits like reduced risk of heart disease, and improved digestion. Though, based on years of eating peppers and the results of doing so, I am curious as to what these people consider “improved digestion.”

As an unabashed lover of eating all my meals with a heaping side of mouth pain, much of this makes sense based on my experiences.

Capsaicin as an antioxidant? Sure! Modern industrial life has filled our bodies with poison. Based on the final digestive aftermath of eating chicken wings that have been rubbed with spices and then slathered in what has the mouthfeel and appearance of molten copper, I’d say it’s pretty clear that a meal heavy with capsaicin expels toxic waste from your body. In one specific, long, painful process.

Improved digestion? Absolutely! If you can digest a plate of TGIFridays Jalapeño Poppers you can probably digest a handful of rusty nails.

As far as reduced risk of heart disease is concerned, being thin — from the metabolism boost spicy food provides, as well as from constantly fire-hosing out your insides — is probably a boon for the heart.

So there you have it. Spicy food helps you live a longer life, and our dietary recommendation is that should start eating hot chili peppers by the bushel! Find it unpleasant? So is exercising. So suck it up and start melting your insides. It’s good for you.

This story was originally published July 17, 2018.