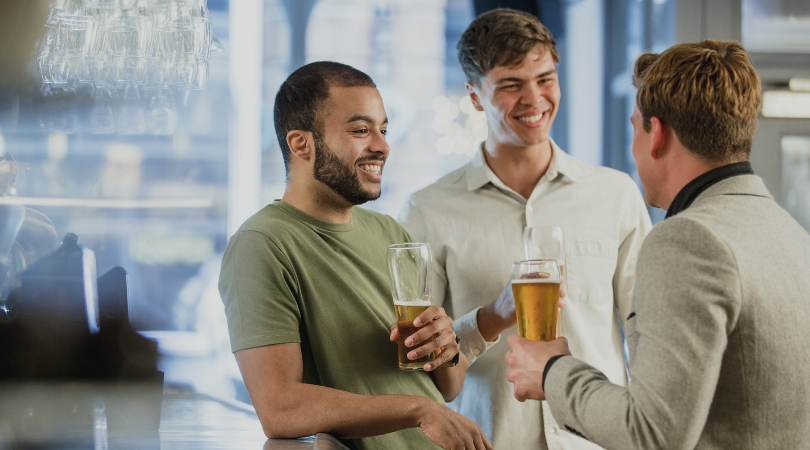 The answer to our problem is here! Does fake smiling at your co-workers ever wear you down? Well, it turns out you’re not alone, after a study found that people who find themselves forcing a smile during work get so worn down by faking it, that they are more likely to drink heavily after hours. Yes, turns out happy hours are our favorite thing to do because we fake smile at people throughout the day. Which explains a lot if you ask me.

The study was conducted at Penn State and the University of Buffalo, where researchers studied the drinking habits of people who work with the public. For example people in the Food service who work with customers, nurses who work with patients, and teachers who work with students. Researchers found a link between those who regularly fake or amplify positive emotions, such as smiling or suppress negative emotions resisting the urge to roll your eyes, for example, and heavier drinking after work. So, we might want to reconsider service with smile policies.

Researchers found that faking and suppressing emotions with customers was related to drinking beyond the stress of a job or feeling negative about one’s self. The more employees have to control negative emotions at work, the less they are able to control their alcohol intake after. Faking or suppressing emotions in front of customers is what’s leading employees to use a lot of self-control. Those employees may not have a lot of self-control after regulating how much alcohol they drink.

Think about it, smiling as part of your job sounds like a really positive thing, but doing it all day can be draining. Can you imagine a nurse frowning the whole day trying to cheer you up, yeah that doesn’t right, so fake smiling it is.

Researchers used data from phone interviews, interviewing a total of 1,592 United States workers. The data came from a service funded by the National Institute of Health called the National Survey of Work Stress. Overall, 3,000 participants were included, gaining information on how often participants fake or suppress motion, which is also called surface acting, as well as how often and how much the participants drink after work. Researchers also measured how impulsive the participants are and how much autonomy they feel they have to be at work.

Honestly, this actually makes sense. Think about it, if you’re constantly told how to do your job it’s harder to gain control of your emotions all day. So yeah, when you get home you’re going to have a beer here and there. Researchers also found a strong association between surface acting and drinking for those employees with highly impulsive working jobs, where employees have one-time service encounters such as a call center or a coffee shop rather relationships like education or Healthcare.

People in these jobs tend to be younger and with an entry-level position which lacks self-control tendencies and the financial and social rewards that can buffer the cost of surface acting. So yeah, moral of the story, employers, maybe take it easy on your employees. Or maybe just reward them with a good happy hour here and there.