Chocolate bars or hard candy? Almond Joy or Mounds? The Halloween candy choices out there are many, but beware: stay away from these 10 terrible picks. You don’t want a trick for your trouble.

The Worst Halloween Candy You Can Give Trick or Treaters

People like peanut butter, but combine it with molasses and you’ve got the world’s chewiest substance. In the age of tasty, sticky candy like Air Heads and Laffy Taffy’s, let’s leave this decades old confectionery nightmare alone. 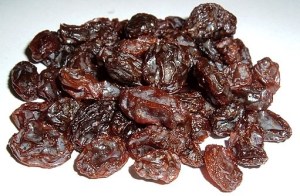 Raisins are obviously not candy, even though they are sugary and chewy. If anyone really wants to foist these on their kids, stick to the Ants-On-A-Log idea. There are no surprises there, and therefore, no disappointment.

A staple candy of our grandparent’s generation, circus peanuts seem fun. They’re orange, a quirky shape and folks love the circus. It’s too bad, then, that these taste neither like peanuts or, frankly, candy. Like Peeps at Easter, weird marshmallow treats are best avoided.

Honey flavored taffy should be a good thing, yes? Not so much. The delicious sounding treat takes nearly forever to finish and leaves behind a sticky mess. Kids already did the hard work to earn their candy; no need to have them work hard to enjoy it too.

Raisins are on the list twice for a reason, but their chocolate-covered brethren take the cake. Not only does the chocolate actually covering them taste terrible, but you’re being surprised with raisins. No thanks.

Candy corn may be the most divisive candy of all time. Half the world loves it and the other half wishes it was never created. It’s probably better to err on the side of caution and avoid running the risk of no one wanting it.

No one truly knows what this stuff is made of, where it comes from or why anyone eats it. These are three surefire questions that should let anyone know that black licorice should be kept far, far away from the mouths of babes.

They look like giant Sweeties, which is very exciting at first. Until you bite into one and then you wonder, is it candy or just colored chalk? Yikes.

While there’s nothing inherently wrong with pretzels, they’re just not candy. Kids are looking for the rot-your-teeth tasty treats their doctors warn them about – not  the salty snacks their moms give them for lunch anyway.

Just like pretzels and raisins, pennies aren’t candy! But worse yet, they aren’t even edible. Quick, name one thing that can be bought with a penny. See? It’s a pretty big let down to be handed a coin that is basically worthless when there’s chocolate to be had.

This Halloween, be the king of the cul-de-sac and invest in full size chocolate bars — or at least avoid these terrible treats.

The Best Halloween Candies for Trick or Treating

This isn’t an exhaustive list but if you stick with these Halloween treats your house will likely remain egg-free:

This article was originally published October 30, 2017.

Watch: While Filming His Paranormal Show Rob Lowe Claims He was Attacked by a ‘Wood Ape’