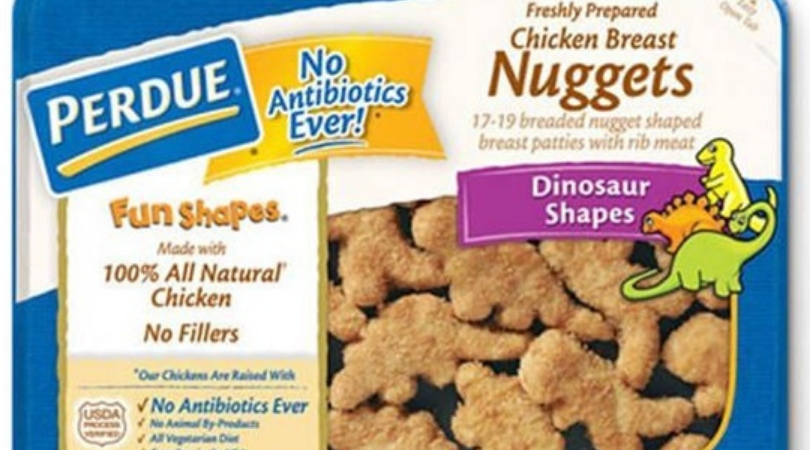 January has been a bad month for chicken nuggets after two major brands have recalled some fan favorite products. Well known brands, Tyson Food and Perdue, have recalled more than 52,000 pounds of chicken nuggets combined! Both recalls were due to issues ranging from possible rubber contamination to mislabeled packaging.

Perdue Farms is voluntarily recalling 16,011 pounds of its dinosaur shaped chicken nuggets sold in 13 states, due to its mislabeled packages. The label does not make it clear that the items contain a milk allergen. The recall of the ‘Perdue’s Fun Shapes Refrigerated Chicken Breast Nuggets’ comes weeks after the company also recalled over 68,000 pounds of its gluten-free chicken breast nuggets due to contamination with pieces of wood inside the nuggets.

Perdue recalled their product after receiving an inquiry from a customer, and several consumer complaints. Fortunately, there has been no report of illness related to the product. The incorrect packaging products were shipped to Vermont, Maine, Massachusetts, New Hampshire, New York, Pennsylvania, Delaware, New Jersey, Mayland, Virginia, West Virginia, Washington, D.C, and Ohio. Customers who purchased the product can contact Perdue at 86863703 or the retail location they bought the product in for a full refund.

Tyson, who is another one of the nation’s largest poultry companies, is recalling 36,420 pounds of chicken nuggets that may be contaminated with pieces of rubber. According to the U.S.Department of Agriculture’s Food Safety and Inspection Service, the recall applies to 5-pound bags of ‘Tyson White Meat Panko Chicken Nuggets’. The nuggets were produced on November 26, 2018, and have a ?best if used by? date of November 26, 2019, and case code of 3308SDL03. The product also bears the establishment number P-13556 inside the USDA mark of inspection.

Tyson Foods is recalling more than 36,000 pounds of chicken nuggets because they may be contaminated with rubber.

Luckily, there have been no reports of illnesses related to the consumption of the affected nuggets either, which were recalled after customers complaints of ?extraneous materials,? including rubber in the packaging. Consumers are urged to throw the nuggets away or return them to their initial place of purchase.