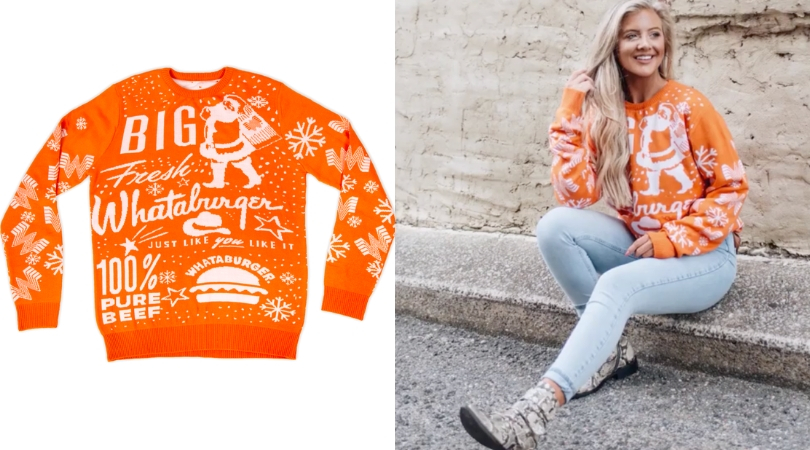 Whataburger, the holy grail of Texas. I mean, just think about it! Name one Texan who doesn?t like Whataburger….you can?t, it?s impossible. That?s just to show you how good it is! It?s kind of like an unsaid rule every Texan follows. Are you celebrating a big win? Go to Whataburger. Need to go eat after a night out at 2 a.m.? Go to Whataburger? Shelly just had her newborn baby and is hungry after all those hours? Go to Whataburger.

Okay, okay, maybe not the last one, BUT, I made my point. So, what is better than Whataburger you say? Well, apparently people love Whataburger so much, that they want to wear it! Yes, the company has now created Whataburger Christmas sweaters! Talk about a fashion line, huh? The holiday sweater is, as expected, bright orange, unisex, and is perfect for any holiday occasion, including eating at Whataburger.

It’s out! #Repost @whataburger with @get_repost ・・・ Back and better than ever, this year’s Christmas Sweater is here! Don’t sleep on this one, get it while supplies last via the link in our bio!

A post shared by Jordan Alexis Farhart (@jordanalexisfarhart) on Nov 4, 2019 at 6:24am PST

Just when you thought they couldn’t come up with something else, here they go making us warm and fuzzy on the outside as well. You better tell your co-workers that you are going to win this year’s Christmas party sweater contest because this is the winner! Add some of those battery lights to it, and you’re all set!

The sweater is selling for $42.99 and is custom-made coming in all adult sizes from small to 3XL. And in case you were worried, the material is 100 percent acrylic and machine washable. The sweater includes its Whataburger logo, snowflakes, a Santa Clause right in the middle, and “100% Pure Beef? written on it to give it an extra touch. In other words, Whataburger basically decided to just throw everything on there to give it that Christmas touch.

You can purchase the 2019 Christmas online, on their merch section. And in case you want to buy other stocking stuffers for friends, they also sell various items such as t-shirts, ornaments, Whataburger socks, Whataburger bibs, mugs, key chains, towels, gift cards…I can go on and on and on!

Honestly, Whataburger surprises me quite a bit. From decorating college dorms to Whataburger style weddings and parties, to just basically existing, this place is like heaven. Next thing you know they’ll be creating their own custom sneakers. So, what are you waiting for? These sweaters are running out quick…so, chop, chop! Time to celebrate the holidays with some true Texas fashion!

Hey, Whataburger?.if you?d like to send some sweet sweater swag our way, I wouldn?t complain. Or maybe just a milkshake? No? Cool.

Editors Note: This post was originally published on November 15, 2018. It was updated on November 4, 2019, after Whataburger announced its new apparel line.