10 Things You Didn’t Know About Tabasco 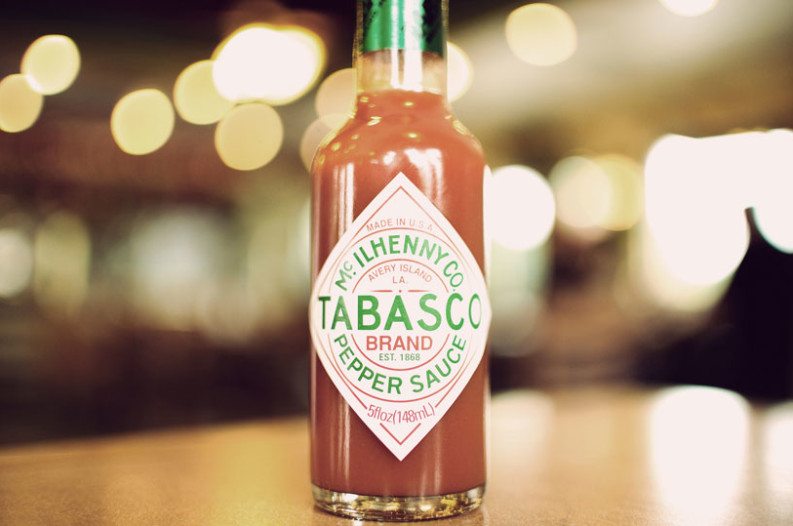 Founded in 1868 in Louisiana, Tabasco has been a staple in American households for almost 150 years now. The signature red hot sauce has a distinctive, yet simple flavor, that enhances, rather than covers, the flavors of the food its added to. But even if you love Tabasco sauce, how much do you really know about it? Here are 10 Tabasco facts you might not know.

10. The name is imported from Mexico.

Tabasco peppers are named for the Tabasco region in southern Mexico, but they imported to Avery Island in Louisiana where they’re grown today. The peppers have been cultivated and grown on the island to manufacture Tabasco sauce. Today, demand for the sauce is so high that the island is no longer able to keep up, and the peppers are grown in Central America.

9. The peppers are fermented.

Much like a fine whiskey, Tabasco peppers are fermented in white oak barrels for up to three years, then mixed with high-quality distilled vinegar, and finally, mixed with salt that’s harvested from the salt mine on Avery Island.

8. There are only three ingredients.

7. Its headquarters has never moved.

The McIlhenny family opened the first Tabasco operation in 1868 on Avery Island in Louisiana. Named for the Avery family, Avery Island is actually an inland salt dome, not an actual island. Edmund McIlhenny married into the Avery family and shortly thereafter began manufacturing Tabasco sauce on the island. The main Tabasco operation remains in that location to this day, and is still family owned and operated.

On Avery Island, the home of Tabasco, you’ll find Jungle Gardens, a 170-acre nature preserve full of tropical plants and native wildlife, including rare birds and alligators, of course.

5. Tabasco has a royal seal of approval.

In 2009, Tabasco was awarded a Royal Warrant from the Queen of England. Tabasco was first exported to England in 1874, a mere six years after its inception. The queen mother (the now deceased mother of the current Queen Elizabeth) prized the sauce, and was briefly deprived of it during World War II when supplies of many things were low.

It has often been said that Tabasco sauce was originally packaged in discarded cologne bottles, which, one would imagine, might significantly change the flavor of the hot sauce. However, Tabasco has refuted this as a myth, stating, “When in 1868 he decided to sell TABASCO® Sauce to the general public, he ordered thousands of new ‘cologne bottles’ (as Edmund McIlhenny himself referred to them in business correspondence) from a New Orleans glassworks.” which is significantly more appetizing.

Tabasco is such a popular flavor that you can get many different products flavored with it, from the ordinary like Tabasco flavored Cheez-its to the unusual like jelly beans, there’s a Tabasco-flavored product to fit every appetite.

2. You can visit the home of Tabasco.

Avery Island is open to visitors, and welcomes guests to the manufacturing facility, welcome center and botanical gardens. In the welcome center, you will find spicy treats and interesting Tabasco products. The family-owned company even employs generations old workers who live on the island and have grown up there.

1. Tabasco is out of this world!

Tabasco was sent to astronauts aboard the skylab space station in the 1970’s to combat against the bland space food the astronauts were eating. According to Tabasco, taste buds swell in space, thereby making food taste more bland than it normally would, while NPR surmised that the fluid retention caused by weightlessness creates nasal congestion which hampers the sense of smell, and therefore, the sense of  taste. Either way, Tabasco to the rescue!