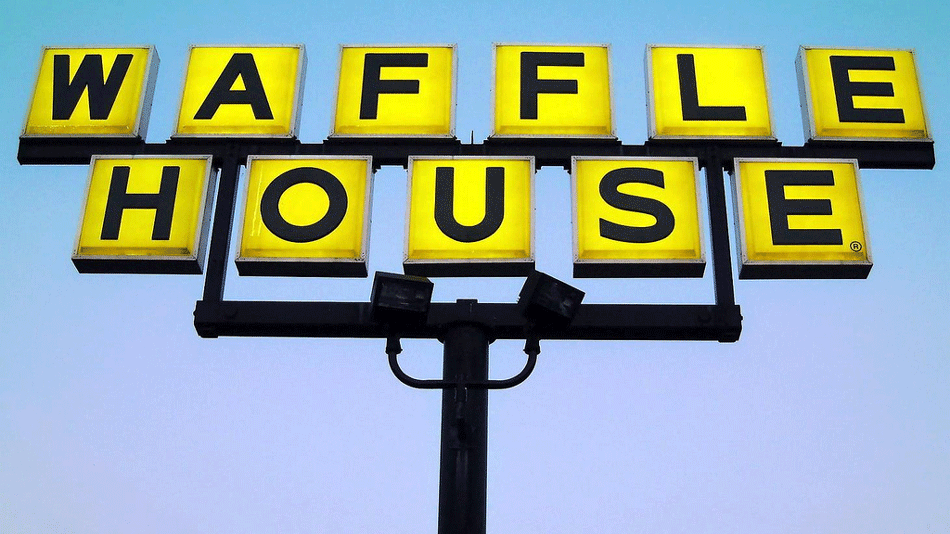 Driving down a dark, lonesome highway late at night with an empty tummy and a hankering for waffles, you can almost hear choirs of angels singing when a Waffle House appears on the horizon.

Waffle House signs have been a beacon of hope for hungry, late-night drivers for more than 60 years. But what’s the story behind this time-honored 24-hour eatery? Read on to learn all the facts about Waffle House you didn’t know.

1. Waffle House was founded by neighbors.

Joe Rogers was working for Toddle House, a national restaurant chain, and Tom Forkner was in real estate when the neighbors decided to start a business together. Rogers and Forkner opened up the first Waffle House on Labor Day, 1955.

The first location was in Avondale Estates, Georgia, about 10 miles outside of Atlanta.

2. It was named after their most expensive item.

When Waffle House was founded, the most expensive item on its 16-item menu was the waffle. Founders Joe Rogers and Tom Forkner named the restaurant after their biggest moneymaker in the hopes of inspiring guests to order more waffles. And since waffles are not typical takeaway food, the partners hoped the name would encourage customers to dine in and stay awhile.

“You can’t carry out waffles,” Rogers explained to reporters from NBC News. “They get pretty flimsy. So we thought, ’Waffle House’ll work.”’

Every Waffle House location is open 24 hours a day, 365 days a year. The restaurant even stages backup supplies and personnel to be ready to stay open in the event of hurricanes and other natural disasters.

4. Waffle House has its own record label.

Waffle House has been releasing music under its own record label, Waffle Records, since the 1980s. Waffle Records has put out dozens of songs in a broad range of styles, including bluegrass, gospel, and rock n’ roll.

You can listen to Waffle House hits on the jukeboxes at many restaurant locations, or check out this peppy number, There are Raisins in My Toast:

5. They serve enough sausage patties daily to tower over the world’s tallest building.

If you were to stack all the sausage patties Waffle House serves daily on top of each other, the tower would be four times the height of the Empire State Building.

6. They serve enough bacon annually to wrap around the world.

Yup, we went there! #Bacon

Every year, Waffle House sizzles up 25,000 miles of bacon strips. That’s enough bacon to wrap around the world!

10. They have their own hashbrown language.

Over the years, Waffle House chefs developed different styles of hashbrowns with unique names for each. Next time you order hashbrowns at Waffle House, you can ask for:

Many restaurants even bring in live music. The romantic, reservation-only event has been a Waffle House tradition for more than 10 years.

13. They hosted the world waffle-eating championship.

Waffle House has hosted several World Waffle-Eating Championships when competitors scarf down waffles in the hopes of winning cash prizes and the coveted Waffle House Belt.

Joey Chestnut won two years in a row but was beaten by Pat “Deep Dish” Bertoletti when he ate 29 waffles in 10 minutes in 2007.

14. The first Waffle House is now a museum.

The very first Waffle House has been transformed into a museum and restored to look exactly as it did when the restaurant served its first side of hashbrowns in 1955. Waffle House memorabilia from the past six decades is also on display. Call ahead to book a tour; you get to make your own waffle at the end of the visit!

15. Waffle House founders died within one month of each other.

Tom Forkener and Joe Rogers both passed away earlier this year within one month of each other. Rogers died first in March 2017 at the age of 97. Forkner followed in April at the age of 98.

Watch: Would You Put Peanuts in Coca-Cola?