The Burger Debate of the Century: How Do You Melt the Cheese? 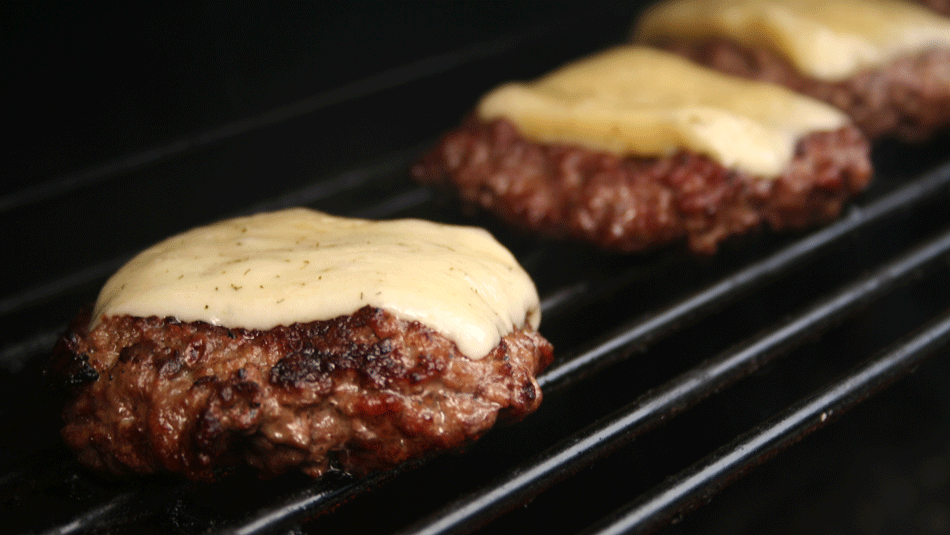 In a recent rant, Deadspin‘s Chris Thompson called me dumb. Well, not me specifically, but he said it’s dumb to cheese your burger on the grill. So, what gives? What’s the deal with cheesing on or off the grill? Does an off-the-grill method reign supreme for the best melted cheese?

Personally, I’m an on-the-grill melted cheese kind of girl, but I’m open to looking at this argument from both sides. Let’s break it down and look at the pros and cons of each claim.

1. Overall, Melting Cheese on the Grill is Lunacy.

In Thompson’s argument, he claims grill-melted cheese is “turbo-charged,” melting it too fast. This causes the cheese to spill off of the burger and covers your grill in charred cheese scraps. This is his main argument against grill melted cheese.

The Pros: Melting cheese on the grill is the most effective way to ensure that your cheese does melt. Have you ever had a cheeseburger with half melted cheese? Now that’s terrible.

The Cons: There are no two ways around it, melting cheese over too-high heat is bad for cheese lovers. Excess heat causes the exact effect Thompson describes: less melted cheese on the burger and an excess of cheese on the grill grates.

The Solution: Don’t put the cheese on the burger when you flip it. Instead, allow the burger to cook all the way through and move it to an indirectly heated side of the grill. This will achieve the best of both worlds: fully melted cheese that doesn’t slide off the sides. If you can’t heat your grill for indirect heat, move the burgers inside to a 300 degree F preheated oven to melt the cheese.

2. The Residual Heat Melts the Cheese Just as Well.

According to Thompson, cheese doesn’t need a lot of heat to melt, and there is enough residual heat in the patty to melt the cheese. His method has you put cheese on the top burger bun and place the patty directly on the cheese to melt it.

The Pros: Yes, the residual heat from the patty will melt most types of cheese, namely American cheese and other thinly sliced cheese varieties.

The Cons: If you have thick slices of cheese or less meltable types of cheese like feta, residual heat won’t achieve a full melt.

The Solution: Not all cheese is created equal, so it’s important to choose a cheese that becomes one with the patty when it melts. If you’re cheesing with American, Cheddar, Swiss, or another thin, meltable cheese, go ahead and rely on residual heat. If not, be safe and melt on the indirect side of the grill.

3. The Dreaded Cheese-less Middle of the Burger.

FYI: This is the proper way to put cheese on your burger when grilling.

The reason Thompson is anti grill-melted cheese is because of the dreaded cheese-less middle. The excess heat congeals the cheese onto the side of the burger, resulting in a cheesy sided burger that is cheese-less middle The middle should be the best part, so cheesing off-the-grill creates a better burger experience.

The Pros: Cheesing off the grill would certainly solve this problem. The residual heat will never be hot enough to cause the cheese to slip off to the sides of the burger.

The Cons: Again, nothing is worse than a burger with half melted cheese. If your residual heat isn’t hot enough to melt the cheese, your cheeseburger will be a terrible disappointment. At that point, it won’t matter that there is cheese in the burger’s middle.

The Solution: Pressing a dimple into the middle of the burger patty helps the burger cook more evenly, and it also has an added benefit: cheese will pool and collect in the center! You can also cut your cheese in half and lay it on the burger diagonally, which will double the cheese in the middle and prevent it all from sliding away.

4. Condiments On Top of the Patty Cause Melted Cheese to Slide Off.

They have hatch green chiles @habitburgergrill!! Get to a location near you before October 3 and add them to your double char with cheese. After that hatch chile season is over and they'll be gone. . If you've never had a green chile Cheeseburger, your life need this. These smoky peppers will add a flavor to your Burger that will change your life forever. . They have some special menu items featuring the New Mexican chiles but if you ask nicely, you can add them to anything. . That's making me think, I should go back and order green chile cheese fries! . . . . #burger #burgers #burgerlovers #burgertime #burgerconquest #hamburger #instaburger #cheeseburger #burgerlife #Burgraphy #🍔 #bestburger #bestburgers #bestburgerintown #bestburgerever #bestburgersever #burgerporn #burgeratti #chiles #greenchile #cheese #cheeseporn #🧀 #ahungrylife #eater #fatnessacademy #food #foodandwine #foodbeast #foodilysm

Thompson finishes his rant by calling out burger chefs that pile condiments on top of the cheese. The argument: it makes your burger “a slick, sliding mess, and in all that sliding, the cheese is, again, pushed away from the top of the burger and onto the burger?s sides. Horrible.” His solution is to put the condiments and vegetation on the bottom half of the bun instead.

The Pros: Putting the toppings on the bottom bun keeps them far, far away from the melted cheese, so there is no way they can cause it to slip and slide around.

The Cons: All those juices from your perfect burger patty are going to make the vegetation wet. It might save the melted cheese from sliding, but it will still create a soggy burger experience.

The Solution: Don’t put a salad on your burger. Admittedly, I’m a cheeseburger purest: my perfect burger is a soft potato bun, a simple patty with melted American cheese, a few pickles for crunch and salt, and a thin layer of mayonnaise on the bottom bun to keep it from sogging out. That’s it. While there’s nothing wrong with piling on the toppings, make sure you can hold it with one hand. If you can do that, it won’t really matter whether you put the toppings on the top or bottom bun.

Regardless of which side you’re on, Team On-The-Grill or Team Residual-Heat, you should probably test each theory. Like, maybe every day. Why not?

Go classic and make a copycat In-N-Out burger, or go crazy and make this easy venison cheeseburger. Or, skip the debate altogether and stuff your burgers with these amazing bacon-wrapped beer can burgers.