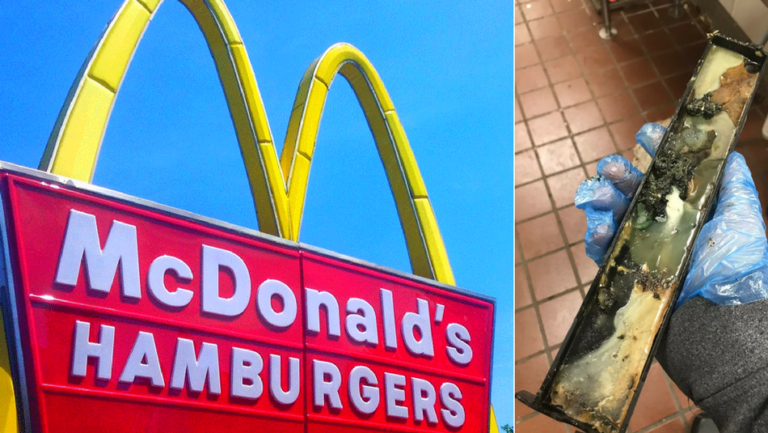 Everyone knows that McDonald’s is not a healthy place to grab a bite to eat. Seriously, you can’t even kid yourself into thinking otherwise. There is nothing about grease-laden fries or double decker hamburgers that screams “healthy living”. However, there is a certain health standard that we expect even the most sub-standard food to adhere to. Honestly, if you’re going to choose to put bad-for-you food into your body, you may as well feel confident that it’s not going to do any immediate damage to you.

Right? Well, apparently McDonald’s doesn’t feel the same way. A McDonald’s employee from Louisiana took to Twitter to announce his horrification at the abysmal state of the franchise of the fast food chain works at.

Since I'm exposing McDonald's I might as well show y'all what y'all really eating… fresh out the freezer. pic.twitter.com/KZ7Ao1kWsR

This came out of McDonald's ice cream machine in case y'all were wondering… pic.twitter.com/DTXXpzE7Ce

While it isn’t any shocker that the meat that you indulge in at the golden arches is previously frozen, the uncleanliness of the machine from which those delightful McFlurry’s come forth is astounding.

Twitter users, of course, had their piece to say.

One fellow blamed the employees for the abysmal state of the ice cream machine.

plus aout the ice cream its only like that because y'all the employees aren't cleaning the machine daily like your suppose to be.

Someone else countered, that it was so bad that even Wendy’s could do better.

That sounds like BS, every employee cleans frosty machines at Wendy's and they do it nightly. Those managers just lazy as hell

People were even getting offended for the customer base as a whole.

Can't believe we feed old people and VETERANS that crap 💀💀

No one, however, was completely shocked that the restaurant served previously frozen meat.

You.
Like. The fact that McDonalds serves frozen food literally isn't a secret. Everyone eats it. Children. Vets. Who cares anymore lmao

Nick, who originally tweeted the photos, said that anyone who is not put off by these photos clearly needs to do some soul searching.

So, will you be heading to McDonald’s the next time a craving strikes? No judgment, but. These pictures might flash before your eyes.

This post was originally published on Rare from Wide Open Eats, our sister site, on July 14, 2018.

Watch: The McDonald’s Secret Menu Is Worth Trying