If Commercial Distillers Can Make Moonshine, Why Can’t I? 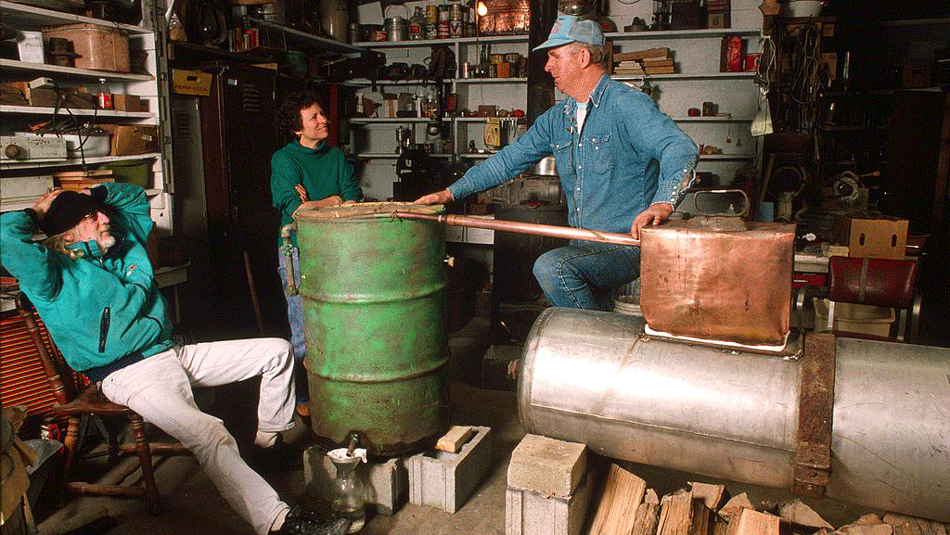 One sip of the white lightning?moonshine?and you feel it right down into the belly. Strong enough to put hair on your chest, hear the word moonshine and illegal liquor comes to mind. What was once a hush-hush business hiding out in the boonies from the law has now turned into profitable sales. Commercial distillers across the nation have engaged in legal moonshine distilling, slapping on fancy product labels, and selling to consumers through distribution ? you can even get some sold in a mason jar itself, but is it true that moonshine is illegal to make still?

Even the Discovery Channel has turned moonshine into a profit with its popular TV series “Moonshiners”. The show has done well in glamorizing illegal moonshine, causing fans to seek out their own supplies for homemade distilled spirits. For the real moonshiners, however, it’s not about glitz or glamor, it’s about the shine?it’s not real moonshine if it wasn’t made in the secrecy of your own home. Is it illegal though to distill your own hooch for private consumption? What are the distillation laws exactly nowadays?

To gain a better understanding on moonshining, we first must understand its rich history in the United States and how the government controls alcohol sales. After the American Revolution, the government placed federal taxes on liquor as a means to gain revenue from expenses drained during the war. The excise tax placed on distilled spirits, however, was not popular amongst the people.

All of our products at Northside are completely made by us! All the way from tiny pieces of grain, to the spirit in your bottle!⠀ Come out and visit us on April 29th, and the days after, to get an insight to how corn becomes liquor!⠀ .⠀ .⠀ .⠀ #moonshine #cornliquor #graintoglass #distillery #cincinnati #cincinnatimade

Many farmers made their living by turning crops into corn liquor, and the new tax meant trouble for feeding their families?thus trouble for tax collectors. Tax collectors stopping by farms often wound up being tarred and feathered. As tensions grew, angry citizens took to a Whiskey Rebellion in 1794 that took over Pittsburgh, Pennsylvania. While the citizens’ attempts weren’t successful in overthrowing the tax, moonshining continued.

Growing evermore popular in the South, states such as Virginia, Kentucky, Tennessee, North Carolina, and South Carolina became a hot bed for moonshining. Hiding out in the sticks, they weren’t going to pay a cent to the federal government’s excise tax.

While making moonshine wasn’t illegal?not until Prohibition?not paying taxes on it was. In an effort to hide the money making business, moonshiners took to working at night by the light of the moon. Thanks to all those American citizens hiding out at night and brewing up a batch of good ol’ hooch, the term ?moonshine? now had a new meaning.

In attempts to feed their families, moonshiners had to protect their product. Gun fights and ratting on moonshiners became all too common. Violence ensued as non-moonshiners outed still locations and tax collectors were threatened. The growing unrest helped contribute towards what would become the Temperance Movement.

Thanks to the violence that occurred from not paying the excise tax on liquor, those in favor of outlawing alcohol gained traction. Soon, the 18th amendment was ratified and America would have to face Prohibition. Now with the production or sale of booze outlawed, moonshiners had no choice but to to start bootlegging.

The problem moonshiners faced with bootlegging other than being discovered, was transporting their product?that’s where whiskey runners came into play. Running illegal whiskey moonshine, fast drivers took to hauling the product in the wee hours of the night, running from the law.

In fact, it’s the very act of whiskey running that gave usNASCAR. The good ol’ boys in the Appalachia would soup up their cars and drive through windy dirt roads in the middle of the night to evade the police. Trying to have the fastest car for the getaway, the bootleggers got the bright idea to clear out fields and set up race tracks – the rest is pretty much history.

One of the last bootleggers, Marvin ?Popcorn? Sutton, turned his ?likker? into a legacy. Distilling up moonshine and running from the law, Sutton was a true moonshiner. Using a recipe that was passed down from generations, Sutton continued to illegally distill well into the 2000s, despite run-ins with the law. His legend still lives on through his small batch recipe Popcorn Sutton that’s available today.

Despite how Sutton and others feel about the law, there’s trouble with drinking moonshine itself and it all has to deal with the distillation process. Making liquor may sound fun, but it can be deadly if not done properly. There are no regulations on homemade stills, and some would form them given whatever material they could solder together.

The danger in this is without use of proper equipment, it’s likely that your moonshine can lead to lead poisoning. And if you don’t know anything about the fermentation process, your corn mash can turn into methanol, causing blindness or even death. While most home distillers are well-versed in the practice, it is important to remember what can go wrong.

So back to the question, is makingmoonshineillegal? Technically yes, if it’s for personal consumption. You can, however, own and operate a still to process alcohol for fuel?with proper permits. Moonshine distribution, on the other hand, is legal if you’ve gone through the red tape to get the proper permits.

Back in 2010 when the economy was plummeting, Appalachian states found they could profit from legalizing moonshine. Tennessee was the first to legalize the white liquor, then states like Kentucky, Alabama, Georgia, and South Carolina soon followed. That’s why you can get a first-hand glance at the Ole Smoky Moonshine distillery in Tennessee, then belly up to the tasting bar for a free taste of the white lightning.

I'm pleased to say it's a success. It tastes like gin but we'll have to see how it finishes off. #gin #homemadegin #craftgin #craftginclub

When it comes down to it, it’s all about money. In 1978, the federal government legalizedhomebrewing for the first time since Prohibition?but this didn’t include spirits. You could now brew your own beer or wine for personal consumption, but spirits were still illegal. The reason? That pesky excise tax moonshiners hated is still too profitable.

The federal government wants its money, and it gets more money taxing liquor than it does beer or wine. The federal government receives $2.14 per 750ml bottle of 80-proof liquor compared to a mere $0.05 cents per 12oz beer can ? or $0.30 a six-pack. So lesson is, if you’re making shine, then get your permits. Otherwise you’re facing some serious jail time.