The 15 Regional Chip Brands We Wish Were Sold Nationwide 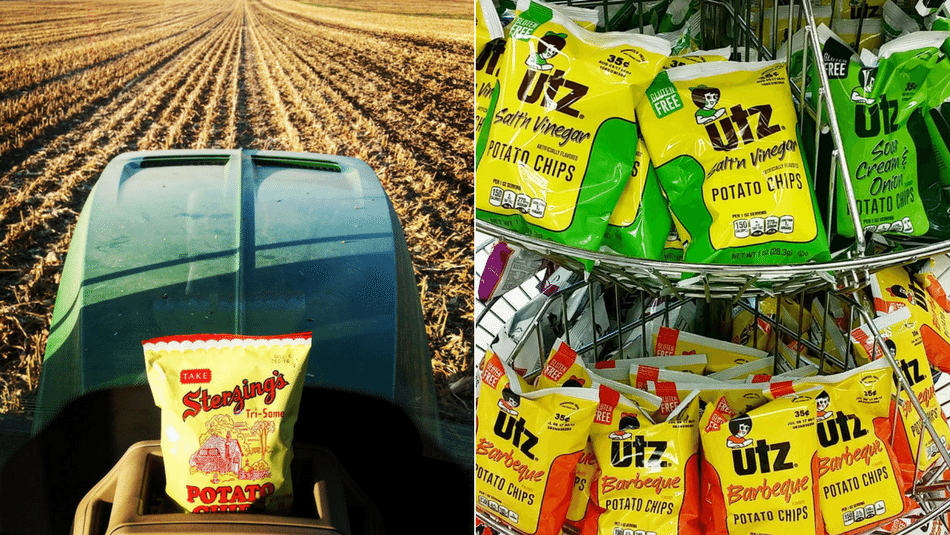 You can walk into almost any deli or corner store in America and pick up a bag of Frito-Lay varieties, Cape Cod Sea Salt chips, or a tube of Pringles. While there is nothing wrong with indulging in the greasy crispiness of mass-produced fried potatoes, there is something to be said about trying some local flavor of potato chip brands. Undoubtedly, the best potato chip you can find is often the hyperlocal variety because they’re fresher and capture the region’s unique flavors.

In fact, for generations, it was the regional potato chip that dominated the American snacking scene. In Louisiana, that meant Zapp’s. For Alabamians, it was Golden Flake. In the olden days, road trippers were known to drive the extra mile to pick up a bag of their regional favorites just to take them home to share. Should you be one of the many who is uninitiated to the local legacies of some of the country’s most beloved potato chips, here is a list of 15 to help get your acquainted.

The branding on the Spicy Cajun Crawtators bag reads, “Zapp’s was the first Cajun-flavored anything and is still our #1 seller!” And it’s true. These Louisiana potato chip makers were one of the first onto the spicy chip scene.

However, even after its explosive introduction into the snack world, the brand’s popularity has not cooled down. Today there is a range of tantalizing tastes including Cajun Dill Gator-Taters and a (now deceased) Key Lime Pie.

Experience this beautiful day with #bouldercanyon 😊

The fresh ground black pepper variety might be on the best on the market today. Or you can really see what this company can do with all-American flavors and sample its “Thanksgiving Feast” lineup. Whole Foods carries Boulder Canyon in select locations.

However, these beloved tortilla chips really caught on around the I-35 corridor between Austin and San Antonio. Now for residents in Central Texas, not having a bag of El Milagro in your house for an impromptu party is unthinkable.

Coming straight from the heart of the South, Brother Kane chips are down-home flavors at their finest. Think Buffalo Wing Blue Cheese and crinkle-cut baby back ribs chips.

Sometimes old-fashioned simplicity is the answer, and Brother Kane just has a pleasing texture that makes their styles irresistible.

The chips in a bag of Golden Flake are exactly as you would expect: thin, golden, and crispy. However, their backstory is anything but golden.

Founded in 1923 by Frank Mosher, he and his wife battled through a bitter divorce that spanned several decades, the result of which is that he lost the company to her. Later, his wife sold it to the Bashinsky family who have an interesting story of their own. In 2010, the heir apparent staged his own suicide with a bag of Golden Flakes in his mouth to look like a business-related murder.

Despite all the drama, Utz Quality Foods picked up the brand and has done a good job of promoting the product for all its good qualities. Like its perfect crunchiness and its unthinkable lightness. They’ve even added new flavors like “Tangy Pickle BBQ,” “Sweet Heat Barbecue,” and ?Buffalo Ranch.?

True to a Virginian’s heart, Route 11 boats a delicious Chesapeake crab flavored chip. But they didn’t stop there. Route 11 has a long list of fun flavors like sweet potato chips and a habanero-BBQ blend called Mama Zuma’s Revenge.

Perhaps the best part about this chips is the “free fry viewings” that chip fanatics can attend at the factory. Don’t act like you’ve never wanted to watch how your favorite style potato chips are made.

The only potato chip made in West Virginia, these chips are also only available in that state (and online, of course). Founded in 1951, Mister Bee chips are famous for being imperfect, just like the drawings on the packaging.

Each batch is a surprise with the thickness of the chips and the depth of their coloring constantly varying. That’s what makes them so authentic. You can enjoy imperfection in original flavor, barbecue, honey barbecue, sour cream and onion, and jalapeño.

Somehow these Pennsylvania-produced chips became a hit in NYC. Not only is their following enormous in New York delis, but they even managed to become the official chip of the Mets baseball team. Talk about a home run. If the Mets can gamble on Wise chips, then you should too, when you’re in the Northeast.

Founded in 1964 by a potato chip enthusiast named Mark Dieffenbach, the company has come a long way since its stove-top days. Today the company produces 250,000 pounds of chips a week as one of the more active chip manufacturers on this list.

However busy they have become, the current CEO, Nevin Dieffenbach, says, “We still have one of the kettles that Mark Dieffenbach made.? Unfortunately, these chips stay in Pennsylvania. That is unless you’re savvy enough to know how to order them online because everyone should have access to their favorite kettle foods.

Utz has deep roots in Pennsylvania even though it has managed to generate a loyal popular snacks following in Maryland with their beloved Old Bay Crab Chips.

Although they produce all sorts of snacks outside of potato chips, true fans remain loyal to the original product that brought the brand to fame back in the 1920s.

Mikesell’s Snack Food Company has ?been around longer than almost every other potato chip company in the United States.? If you’re curious, the company dates back to 1910.

Just like Ruffles have ridges, at Mikesell?s, chips aren?t ridged, they?re ?groovy.” This century-old company caters to all tastes with a Cincinnati-style chili flavor, a beer can chicken option, and a classic mesquite-smoked bacon variety.

At Ballreich’s, “ridged” and “groovy” do not apply. At this fourth-generation family-owned operation, chips are “marcelled.” If you’re wondering what the heck that means, you’re not alone. The term refers to a 1920s hot-curled, wavy hairstyle that was popular when Fred and Ethel Ballreich first set up shop.

However, for those who aren’t sure about trying out their perfectly quaffed ridges of these chips, Ballreich’s chips also come in “flat.” Flavors range from smokey sweet mesquite to salt and vinegar and sweet potato to spicy ?Hot ‘N Sassy.?

Sterzing’s chips are not only delicious, they’re patriotic. An Iowa institution, the company is fanatical about limiting their recipe to three ingredients: potatoes, oil, and salt. As a result, they only offer one flavor.

Not only are they rabid about their ingredients, they are incredibly particular about their production method as well. The family-run operation still employs workers to stir vats of oil by hand. “That helps keep employment, as far as I’m concerned,” co-owner Craig Smith told a local television station in 2014. “We could automate the entire process, but we choose not to.”

In fact, the only reason these chips made it out of Iowa was because Midwestern boys serving in Vietnam wrote Sterzing’s to begin shipping their favorite snacks abroad so that they could enjoy a taste of home. Today, the brand still provides their chips to servicemen around the world.

Better Made, founded in the first year of the Great Depression by a duo of Italian immigrants to the Motor City. Amazingly, over the years they have managed to outlast the majority of the 40 different chip outfits that were around at the time of Better Made’s founding.

Obviously, that means they’re doing something right. Somehow, Better Made has managed to make the burnt, reject, ‘rainbow’ chips a covetable snack. Don’t believe it, pick up a bag for yourself.

It occurred to us that with all of the #tastespudtuesday flavors we've done, we haven't profiled the chip that made Tim's famous! – Our Tim's handcrafted Jalapeno chips are cut thick, then seasoned with just enough jalapeno seasoning to make your forehead sweat. – These chips are truly addicting! You'll find yourself reaching into the bag over and over. – They go especially well with a #PNW Craft Beer!

There are several well-known chip brands (like Kettle) that come out of the Pacific Northwest that are much older than Tim’s. However, Tim’s has really made its mark and developed a base of rabid fans who swear that the signature thick-and-crunchy chips are out of this world.

According to the co-founder Jeff Leichleiter, who spoke to the Daily Record News, the secret is to begin cooking the potatoes at a lower temperature then slowly raising the heat.