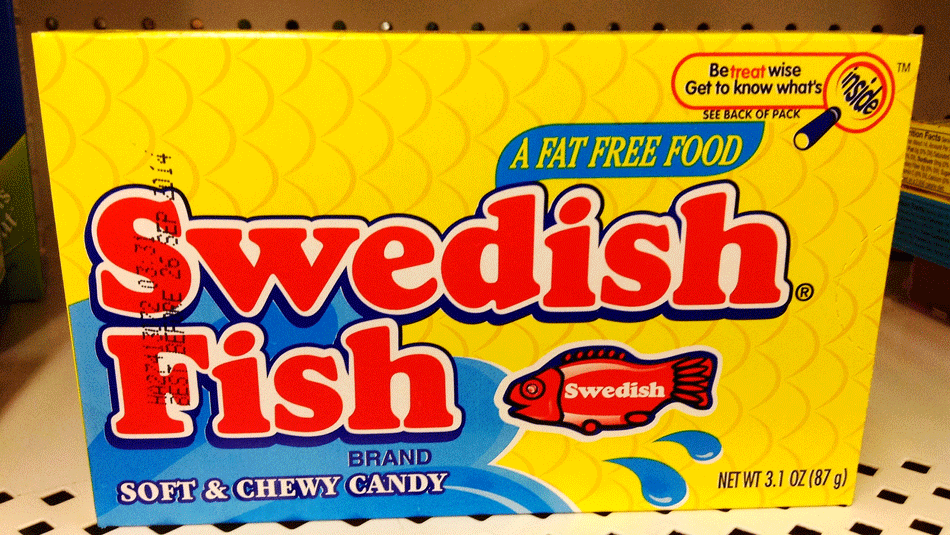 Whether you love or hate Swedish Fish, you can’t deny that the chewy candy is so popular that it’s found just about anywhere in America. If you sneak this sweet treat into movie theaters from the drugstore or you prefer to just snack on them at certain times of year, red Swedish fish candy are somehow surprisingly addictive. “Tastes like fruit, not fish. Try some if you want.” That?s the official mantra of Swedish Fish, the addictive little red fish candy with an unidentifiable fruit flavor in your favorite grocery store aisle.

You probably already knew Swedish Fish don?t taste like fish, but you might be surprised by the fishies’ interesting tale. Learn about their fascinating fish-tory and check out these 11 surprising facts about Swedish Fish.

1. There?s a ton of controversy over their flavor.

WHAT FLAVOR IS RED SWEDISH FISH?!
"..often guessed to be lingonberry, but never verified."
The mystery grows.

Fans have long debated the flavor of Swedish Fish, with some insisting on cherry, others suggesting blackcurrant, and still others proposing fruit punch.

One popular theory is that Swedish Fish taste like lingonberries (also known as cowberries), a bright red berry used in Nordic and Baltic cuisines.

Swedish Fish do not contain gelatin, the gelling agent derived from the collagen obtained from various animal body parts found in most gummy candies. So, unlike most gummies, Swedish Fish are vegan and 100 percent animal cruelty-free.

3. They have the word ?Swedish? branded on their side.

Apparently, every Swedish Fish gummy has the word ?Swedish? embossed on their side.

I myself cannot verify this information, having never paused long enough to look closely at a Swedish Fish gummy before popping it into my mouth.

In the late 1950s, Swedish candy manufacturer Malaco began exporting their wine gum- and licorice-based sweets to the U.S.

5. They come in different sizes and flavors.

In 2009, it was estimated that 7,000 metric tons of Swedish Fish are churned out annually. That?s the equivalent weight of nearly 2,000 orca whales.

In 2009, Rita?s Water Ice released a Swedish Fish-flavored Italian Ice. According to Rita’s Italian Ice’s Twitter, the flavor is still part of their rotating selection.

#SwedishFish is def still one of our flavors! Our Ice is made fresh daily, so the flavor selection changes every day at each location.

Swedish Fish Oreos Mini Review: I got quite a few PMs this morning asking how these were and quite honestly we arent huge fans of the swedish fish gummies. Upon opening the bag we were greeted by a berry yogurt kinda smell. The creme seems to have a different consistency than other oreos…almost a waxy paste. Taste wise you can really taste the Swedish Fish creme after getting passed the chocolate wafer. In closing, this wasnt our favorite oreo cookie and we wouldnt miss it if this was discontinued lol . . . #new #oreos #oreo #swedishfish #swedishfishoreos #swedishfishoreo #nabisco #cookie #cookies #junkfood #snacks #snack

However, unlike the popular Swedish Fish ices, the red and black cookies were by and large a flop, with many consumers complaining of an overwhelming cough syrupy smell and taste. Oreo took Swedish Fish Oreos off the shelves, but you can still purchase them on Amazon if cherry Benadryl piques your appetite.

9. They also go by the name ?Pastellfiskar?.

In Sweden, the candies are called ?Pastellfiskar?, which translates literally to ?pale-colored fish?.

10. You can try ?black herring? Swedish Fish in Sweden.

In Sweden, you can try the gummy candy in salty black licorice flavor. Salmiak or ?black herring? Swedish Fish are beloved in Sweden, but never quite took off in the U.S. (we can’t imagine why?)

11. Packaging return items with Swedish Fish allegedly can get you faster service.

?The Swedish Fish Theory? is a concept that went viral on Reddit, claiming that you can get faster service if you ship return items with a package of Swedish Fish (or any type of candy, really). Basically, the idea is that a personal gesture thanking your repair technician can go a long way.

Watch: Ever Put Peanuts in Your Coke?