If you’re single and currently mingling, you already know that dating in the modern world is hard. With the countless apps and dating websites available, it can feel a little overwhelming. And don’t even get us started on the possibility of being “catfished” by your online suitors.

If you’ve been on a lot of first dates, but not so many second ones, we may have the answer to your dating dilemma: baby showers. Yes, you read that correctly.

We promise it’s not impossible to find love — you may just have to step outside your comfort zone at unusual locations.

Raj Prashad and Liz Hobbs have proven that love can appear in some pretty unexpected places. While these two individuals were celebrating the future birth of their mutual friend’s baby, they locked eyes from across the room, and it was an instant connection.

Raj explained that it was the first baby shower he was ever invited to, and he wasn’t too sure what he was getting himself into:

“I didn’t think guys got invited to baby showers, so I was pretty surprised when I got invited to my coworker’s baby shower. I actually had tickets to a Braves game that day too, and I was on the fence about even going to the shower. I look back now, and I’m just so thankful that I made the choice to go.”

When Raj walked into the baby shower, Liz immediately had her target set:

“I didn’t know who he was, but as soon as he walked in, I wanted to know. I thought he was so cute!”

Liz made the first move and introduced herself. Their conversation was flirty and playful at first, but later took a more serious tone when the two discussed their personal views on controversial topics. They had the same sense of humor and similar beliefs, so it was smooth sailing from there, right?

Well, not so much. Liz was obviously interested in Raj, but wanted to put him to the test:

“We had this great conversation, and then she just walked away and started talking to other people. I was so confused, but also really interested in this girl. She was very intelligent, really funny, and a very pretty girl. I did my best to get her attention the rest of the baby shower, but she was just not giving me the time of day.”

Liz knew exactly what she was doing. She didn’t want to come on too strong and pulled the classic “playing hard to get” card. Her mind games proved successful when she received a text from Raj the next day. And the rest is history for this happy couple.

Raj has a little advice to bachelors who get invited to a baby shower:

“Guys, if you’re single and you get invited to a baby shower, you’re already halfway there.” 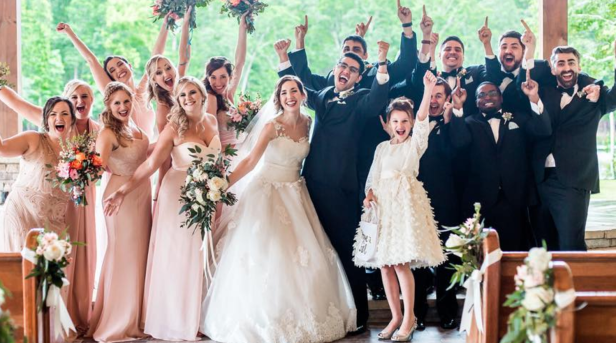