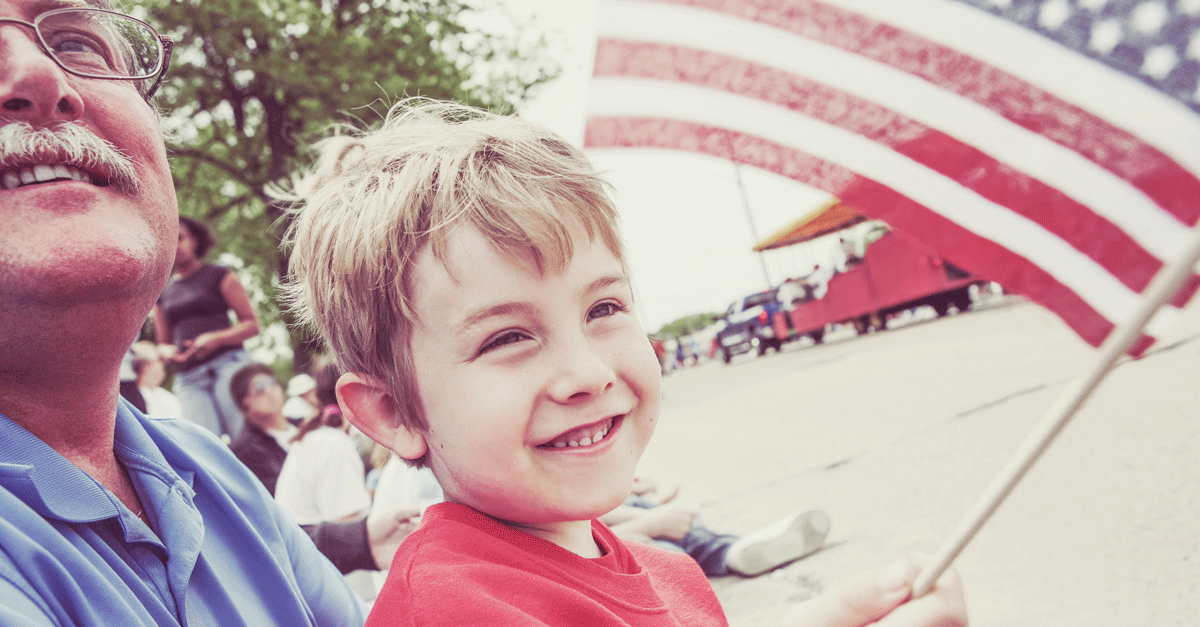 Every good party has a good story, and the Fourth of July is no exception. Across the country, as fireworks shows light up the skies from Boston to New York, St. Louis to San Francisco, and Washington, D.C., most Americans won’t be aware of half the interesting stuff about the national holiday they’re celebrating. Because there’s so much more than fireworks displays, The Star-Spangled Banner, and telling George III to suck it.

Check out these little-known facts about America’s birthday, and how we celebrate our independence from Great Britain (who turned out to be not so great after all).

1. The Nathan’s Famous Hot Dog Eating Competition started as an argument over patriotism.

Back in the olden days towns used to have public readings of the Declaration of Independence. Now we have this. Somehow the exact opposite in terms of elegance, but still quintessentially American.

According to legend, the iconic and intensely American face stuffing competition began in 1916, when four immigrants argued over who was the most patriotic, and somehow decided the best way to figure it out was by seeing who could shove the most hot dogs inside of them.

What these immigrants didn’t realize, however, was that coming to the collective conclusion that the best way to prove who was the most American was by seeing who could eat the unhealthiest amount of cooked meats proved that all four of them were as red, white, and blue as the American flag. Thomas Jefferson would be proud.

2. It actually might be more appropriate to celebrate the Second of July.

Like most everything else in American history — George Washington’s cherry tree chopping, who won The War of 1812 — a few small facts around the Fourth of July have been fudged for the sake of the story. That includes the actual date of the founding of our country, which could (should?) arguably be July 2nd, not July 4th. Why? Because that’s when the real stuff went down at Independence Hall.

the Continental Congress voted for the Declaration of Independence on the second of July in 1776. No one signed it until August 2, and the last signatures didn’t come until the end of November.
“The only thing that happened on the fourth was they approved the document,” said Ronald Hoffman, director of the Omohundro Institute of Early American History and Culture at the College of William and Mary in Williamsburg, Virginia.

Several members of the Congress who voted for independence never signed the document, and several members who signed the document, were absent when the vote was taken, Hoffman added.
John Adams, the second President of the United States, was in 1776 a delegate to the Continental Congress representing the colony of Massachusetts. He wrote in a letter to his wife, Abigail, on July 3, 1776, that “the second day of July, 1776, will be the most memorable epocha in the history of America.”

Pauline Maier, a professor of U.S. history and authority on the American Revolution, said that “in 1777, Congress didn’t think of recalling the event until it was too late to celebrate the second, and the fourth became standard.”

We should probably just have both days off work just to be safe. Though it’s awkward to have July 3rd right there in the middle. So… we’re going to have to go ahead and take the whole week off.

3. The coldest Fourth of July celebration on record was -33 degrees Fahrenheit.

Though, to be fair, it took place in Antarctica.

“In 1934 Richard Byrd was in Antarctica at his base Little America,” Heintze said.
“He and his men set off fireworks in a storm when the temperature was actually quite warm for them?33 degrees below zero [-34 degrees Celsius],” Heintze said.

Nothing says “Fourth of July” like tossing a few penguins on the grill and having a snowball fight.

4. The South started the 4th of July barbecue tradition in a giant way.

Again, cooked meats = America. According to Southern Living, that tradition started in the South, and it’s roughly as old as the country itself.

Just after the Revolution, Americans marked Independence Day with public dinners, and in the South those dinners quickly grew into large outdoor barbecues. In 1808, for instance, the citizens of Oconee County, South Carolina, gathered in ?an agreeable and natural arbor? where, as the local newspaper reported, they ?partook of an elegant barbecue”. . . to celebrate the anniversary of our national existence.
By the 1820s, those celebrations had become highly regimented and standardized, and descriptions of July 4th barbecues from Virginia, the Carolinas, Tennessee, and Kentucky read almost identically.

Not surprisingly, the tradition of drinking and eating meat in a celebratory manner caught on and spread. In 1858, for instance the relatively brand new town of Kansas City, Missouri put a barbecue attended by some 3,000 people. The festivities included a whole barbecued buffalo. We need to bring that one back, but maybe with a deep fryer?

5. England celebrates the Fourth of July, too.

Celebrate the Fourth of July in true patriotic style in London (yes, we understand the irony of that). Visit Benjamin Franklin’s former home, where he lived for 16 years between 1757 and 1775. There will be a lunchtime party featuring glasses of champagne and cake to mark the holiday, according to Time Out London. Alternatively, if you prefer beer to bubbly, stop by the city’s American Beer Fest on July 3. There you’ll find a mechanical bull, folk music and an all-American BBQ.

There’s no way the British don’t mess up that BBQ, though.

6. Some lunatics wanted to make turtle soup the official Fourth of July food, not BBQ.

If I’m going to barf on the Fourth of July, I’d prefer it to be because I drank too many Budweisers, and not because I put hot, wet turtle meat in my mouth to celebrate winning the Revolutionary War.

According to legend, on July 4, 1776, John Adams ? who fought for independence and eventually because the second President of the United States ? and his wife, Abigail, sat down for a celebratory meal of turtle soup, New England poached salmon with egg sauce, green peas, and boiled new potatoes in jackets. They followed the meal with Indian pudding or Apple Pandowdy. Although turtle soup isn’t seen much above the Mason-Dixon line these days, it was once a summertime specialty. The same way we excitedly fire up our grills at the first sign of warm weather, early Americans got their turtle-catching nets ready and headed down to the turtle pond.
…
After that first Fourth of July, annual celebrations continued in the newly formed states. Huge groups came together to hear an orator and then sit down to a large meal. According to Arlene Coco, who spoke to Lynne Farrington, curator of books at the Annenberg Rare Book and Manuscript Library in Philadelphia, this is thought to be origin of America’s first political parties. At these dinners, turtle soup remained the soup du jour.
…
But turtle’s popularity could not be sustained. As a concern for the preservation of certain species of turtles grew, the desire to eat them diminished. A mock turtle soup ? made of veal stew meat ? took its place, but it just wasn’t the same. Ultimately roasted pig became the new centerpiece of Fourth of July celebrations, which birthed the tradition of cookouts and barbecues.

A good reminder that some traditions absolutely deserve to die.

This article was originally published on July 3, 2019.