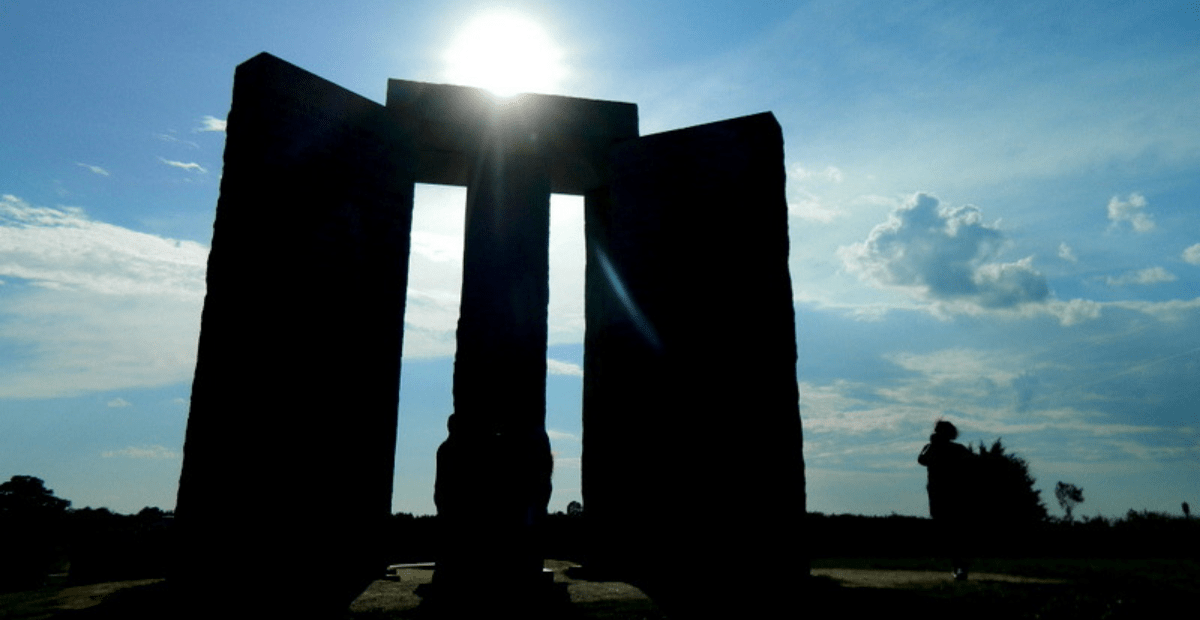 Conspiracy fans, get ready to dive into a juicy new theory. Ever heard of the Georgia Guidestones? Yeah, me neither until recently. On the surface, it seems kind of cool and maybe even humanitarian that a man and a group of “Americans” commissioned an expensive statue with eight different languages and an astronomical calendar from marble two hours away from one of the largest international hubs in the United States. But after a closer look, you won’t be able to deny even the smallest amount of conspiracy theorist in you. The story, recounted in a surprising number of movies and books, goes like this.

In 1979, a man approached the Elberton Granite Finishing Company with a request to build a structure in Elbert County. His pseudonym was “R.C. Christian”, but in hindsight and later research, no one knew his true identity or that of the “small group of loyal Americans” he spoke for in this request. He spent about $300,000 on the granite monument seemingly without a care.

Even when the owner of Elberton Granite gave him an exorbitant quote, R.C. Christian accepted the price, claiming that the group had been planning the structure for 20 years and were prepared to pay. Christian legally required the company to destroy the blueprints and any record of him upon completion of the structure. To further erase himself from the picture, he transferred the land and Guidestones to Elberton County after the unveiling.

What is the real secret of the Georgia Guidestones?

The structure, located two hours from Atlanta, features four upright stones with engravings. These aren’t just any engravings. Many people believe the “guidelines” are messages for survivors of an apocalyptic event that would need to revamp or maintain humanity. And it’s not so far-fetched after all. The engravings translate into eight different languages, one on each face of the stones in the following order: English, Spanish, Swahili, Hindi, Hebrew, Arabic, Traditional Chinese, and Russian.

The Georgia Guidestones also serve as an astronomical calendar. Every day at noon, the sun sines through a small hole or “mail slot” in the center stone, through which you can see the solstices and equinox.

There is also a tiny vertical slot on the top stone which tracks the North Star and so you can use the sky to tell what day of the year it is. You know, for after the end of the world, when we’re without technology. There is also an alleged time capsule, which people have attempted to dig up in the past few years. Whether it’s actually buried there or not cannot be confirmed at this time.

What do the Georgia Guidestones Say?

Perhaps the most controversial part of the Georgia Guidestones are the guidelines in the languages themselves. They’ve received much scrutiny and mixed reviews over the years. Singer Yoko Ono, considered it “a call to rational thinking”, as some of the demands are seemingly rational. Others deemed them to be problematic, and believe them to be something along the lines of ten commandments of the Antichrist.

You can decide what you think for yourself. The Guidelines are:

There has been much speculation as to who the “group of loyal Americans” that R.C. Christian spoke of were. Conspiracy theorists have weighed in that this group was either New World Order members or, of course, Satanists. As for R.C. Christian, nobody knows exactly who he was. Some speculate him to be a member of the Rosicrucians.

If you’re unfamiliar with this esoteric group, we have that in common. The Rosicrucians are a 17th century secret society who preceded the Freemasons, and are considered to be the first group of its kind. They were known for speaking of “The Age of Reason” via printed manifestos in 17th century Germany. Their leader was a man by the name of Christian Rosenkreuz, which sound a little too close to “R.C. Christian” to be a coincidence given the circumstances, but no one knows for sure.

After the election of Barack Obama in 2008, defacing the Georgia Guidestones became more common, most often in the form of graffiti. This is also around this time people started trying to dig up the alleged (and again, probably non-existent) time capsule. This led police to install cameras surveying the grounds 24/7.

What’s your take on the Georgia Guidestones? Let us know! Are you in agreement with conspiracy theorists, or do you think R.C. was full of it?