Grandfather Buys School Bus to Take His 10 Grandchildren to School 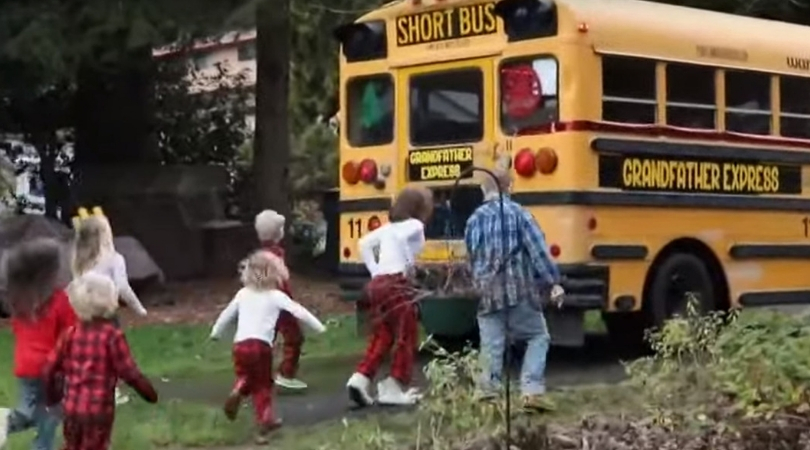 I’m not crying, you are. Okay, maybe I’m crying a little bit, but I love these kinds of stories. Stories that make you believe that sometimes family is everything, so it makes you appreciate your loved ones just a little bit more than you already do.

An Oregon grandfather deserves all the hugs and kisses he can get because he is the real MVP. The grandfather wanted to do something special for his grandchildren this Holiday season. So he decided to give them a pretty unique Christmas gift that can be used for many more years to come.

Doug Hayes, who is Grandfather to 10 grandchildren, stated every Christmas he tries to give his grandchildren one special gift. This year, the gift really couldn’t fit under the tree because it was an actual school bus. Yes, a big, bright, yellow school bus. Luckily for us, a video was captured of Hayes presenting the grandchildren with the gift. In the video you can see the surprises on their faces and hear them asking the grandfather, ?Is that it? You got a bus!? as they run up towards their big surprise.

Can you believe that? This man literally bought a school bus so he can drive the kids to school every morning. This is the sweetest and most adorable thing I have ever seen. As far as why he decided to buy it, Hayes stated, ?I thought, gee whiz, maybe there’s some way that I can give them a memory that will last all their lives.?

His grandchildren go to a small Christian elementary school that doesn’t have any school buses, so when they saw him drive up the driveway, they were all pretty excited. The bus is apparently named ? Grandfather Express? and will give rides year-round.

Hayes, who is now a school bus driver, hopes this very unique gift will create several memories for the family that they will never forget. Which if I’m being honest, it is. Think about it, he’s always going to have some quality time with his grandchildren in the morning and in the afternoon, it really is the perfect gift. Plus, I’m sure all the grandkids will appreciate that family time. Move over Santa Claus.