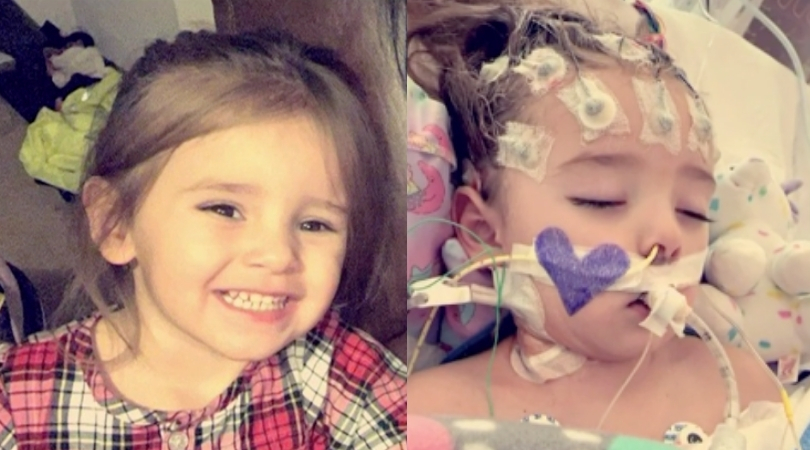 2-year-old Layla Thomas is clinging to life at St. Louis Children’s Hospital, with what doctors are calling a 50-50 chance survival. The Thomas family initially went to the hospital for what they thought was the flu, but quickly realized the 2-year-old was suffering more than simple flu-like symptoms. Thomas has been in the pediatric intensive care unit for 10 days, trying to recover.

According to Layla’s aunt, Jessica Kile, the girl started to have flu symptoms a few weeks back. She began with a runny nose and a cough, which seemed “nothing out of the ordinary”, and nothing they hadn’t seen before. On March 18th, out of the nowhere, Layla’s symptoms quickly escalated.

The toddler was rushed to the hospital with a 107-degree fever and was completely unresponsive, with only being able to make small eye movements. Doctors quickly diagnosed Layla with Necrotic Encephalitis, a rare complication of the flu, which is now attacking her brain.

Necrotic Encephalitis can also be known as Acute Necrotizing Encephalopathy, which is a disease characterized by brain damage. Symptoms of the viral infections include fever, respiratory infection, gastroenteritis, and is followed by seizes, disturbance of consciousness that can progress to a coma, liver problems, and neurologic deficits.

Early warning signs of Necrotizing Encephalitis include seizures, sleepiness, and loss of appetite. Even with appropriate antiviral treatments, some of the severe complications can result in permanent disability or death. Unfortunately for Layla, according to medical experts, all the family can do is wait for the 2-year old to regain consciousness and fight off the infection due to the severity of her condition.

It is important to know when to take the next step when it comes to coming in contact with the Flu. Influenza, which is also known as the flu, is a contagious respiratory illness caused by the flu virus. At times, it can be mild but can lead to severe illness if left untreated, sometimes even lead to death in extreme cases. The flu is VERY different from a cold. Flu usually comes on suddenly and can make your immune system weak, which can cause your body to shut down unable to fight off the infection. Symptoms of the flu often include,

It is also important to remember that not everyone with the flu will have a fever, so checking for symptoms will be your best options. Remember to always contact your doctor if you fear you have contracted the flu.

The Thomas family has set up a GoFundMe page to help with medical expenses.

Watch: When To Get Your Flu Shot