Woman Miraculously Survives After Her ‘Brain Explodes’ Due To Aneurysm 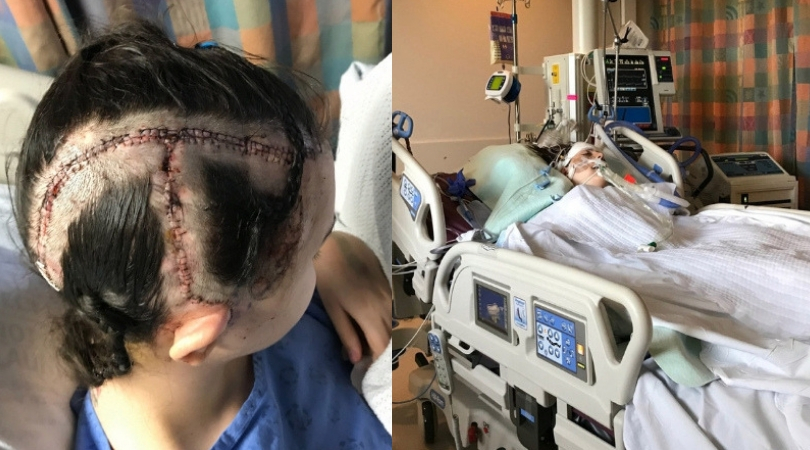 A woman defied all odds after surviving a brain aneurysm that caused a stroke which caused her brain to ‘explode’ in June 2010. Now, 24-year-old Chloe Gallagher, who was 15 at the time of her accident, is being called a “miracle patient.”

Gallagher said that while watching TV, she immediately knew something was wrong after her vision became blurry. She felt a sharp pain in her head, feeling as if it was going to literally explode. She recalled, “I can’t even describe to you the pain I felt that day. I got up to go to the phone in the kitchen since I couldn’t see the screen on my phone, but when I stood up out of the bed, I fell. It was then I realized I couldn’t walk.”

Woman survives after her 'brain explodes' while watching TV.https://t.co/yTpV9hqDpc pic.twitter.com/xhafnTYYqj

The 24-year-old was alone at the time of the accident but managed to call her dad. Chloe’s dad called her brother, and he arrived home, calling an ambulance. Paramedics found Chloe crawled up into a ball on the kitchen floor and screaming from the pain. Doctors initially noticed the then 15-year-old had suffered a ruptured brain aneurysm. A CT scan then revealed her brain was “full of blood” and had to be put into a coma for three days, and conducted an emergency decompressive craniotomy on the left side of her head. Doctors told her parents that even if she managed to survive, she would be left with permanent brain damage.

According to the Brain Aneurysm Foundation, the number of brain aneurysms that actually rupture is much smaller and are more common in people over the age of 40. In the United States, it is estimated that nearly one in 50 people have a brain aneurysm, and about 30,000 people suffer a brain aneurysm rupture each year.

When the 24-year-old woke up from the three-day-coma, she recalled having intense pain, double vision and was cross-eyed but,  cried ‘tears of joy’ saying she was lucky to be alive. The double vision went away after a few days but to this days suffers from peripheral vision loss. While Chloe did recover, she did not emerge “energy unscathed.” In addition to peripheral vision loss, Chloe developed epilepsy and has suffered between 10 and 15 seizures.

Prior to her coma, she underwent an emergency decompressive craniotomy to reduce swelling in her brain and had a blown flap the size of her hand removed. According to the NHS, half of the people who end up in Chloe’s positions die within two weeks. which is why she is being called a walking miracle. Now, Chloe still has to undergo more surgeries, including another bone flap removal. Her latest surgery took place April 4, 2019, at Unmviety Hosptial in London, Ontario.

Despite her struggle, she has been able to continue living her life and is currently a medical student, hoping to become a nurse and help others the way medical staff helped her through her journey.

So what is a brain aneurysm and how can we detect one? Well, a brain aneurysm is a bulge or ballooning blood vessel. The leak can cause bleeding it the brain, which ultimately can be life-threatening. Symptoms of a ruptured aneurysm usually include:

Unfortunately, the causes of a brain aneurysm are often unclear. But, risk factors include high blood pressure, heavy drinking, smoking and old age. Treatment may include medication or surgery to restore blood flow and relieve pain. An unruptured aneurysm not have any symptoms and could not require treatment.