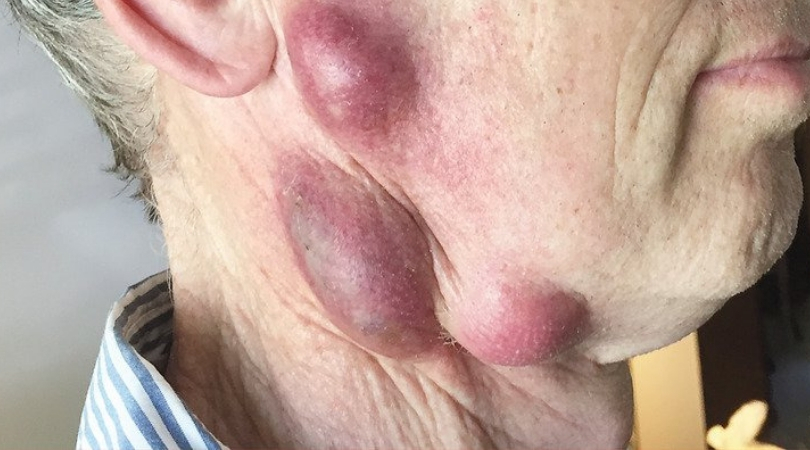 Graphic images are roaming around Twitter after the New England Journal of Medicine shared the case of a man who contracted an infectious disease from his cat. According to health experts, the unidentified 68-year-old man caught a rare infectious disease called glandular tularemia. The name itself scares me already as is. The graphic photo shows the man with bulbous, with red lesions on the right side of his face and neck. The patient visited his primary care doctor after experiencing a week-long fever, followed by two months of pain on the right side of his neck.

According to medical experts, the swelling on his neck turned out to be his lymph nodes, revealing the man had been infected with Francisella Tularensis, a high contagious toxic bacterium. The patient told his doctors that two days before his symptoms began, his outdoor cat had died of what veterans diagnosed as Feline Leukemia. Yet, that diagnosis had never been confirmed with a lab test, which is why doctors suspect the cat was sick from Francisella Tularensis as well.

I’ll be honest, I have never heard of this in my life, and frankly, I wish I hadn’t- I mean, just look at those giant boils! But, being the curious person I am, I researched it so you wouldn’t have to, and have the answers to all your questions. Francisella tularensis is actually very rare in humans. In 2016, the most recent year with accurate data available, health experts recorded 230 cases of the disease in the United States. The disease is more common in an animal, mostly in wild rabbits and mice. But, cats can become infected if they attack a sick mouse, which is probably what happened in this case. The disease can also be carried by deer flies and ticks.

Tularemia has been diagnosed in every state except for Hawaii. CDC stated it’s more common in South Central United States, the Pacific Northwest, and parts of Massachusetts. The rare infectious disease typically attacks eyes, skin, lymph nodes in lungs. It can spread through several routes, including insect bites and direct exposure to the infected animal. It is highly contagious and can potentially lead to life-threatening cases, but can be treated effectively with specific antibodies if diagnosed early. The bacterium can be spread through the air or hot water and can be used as a bioterrorism weapon. Good news though, it can’t be spread from an animal to a human without some kind of scratch, or bite so one won’t get sick just by being around a sick animal.

I get to share my image from the NEJM today. Tularemia from a feline source. The cat was misdiagnosed with feline leukemia, and the patient was infected while caring for her. #MedTwitter #MedEd https://t.co/MQTdqsdsyI

What are the symptoms?

There are several types of Tularemia. In this case, the patient had Glandular Tularemia, defined by swollen lymph nodes and high fever. Another type called Ulceroglandular Tularemia is similar, but can also cause skin ulcers, or open wounds at the sign of infection. Other types usually involve swollen and irritated eyes, sore throat, mouth ulcers, and swollen tonsils. Pneumonic tularemia is the most serious form of the disease and is most likely to occur when the bacterium is inhaled. This type can cause chest pain, cough, and difficulty breathing.

As stated, tularemia can become life-threatening if left unaltered. Lucky, in most cases doctors usually prescribe antibiotics, giving the patient four weeks of doxycycline, which help with the lesions go away slowly but surely. Most people exposed who become sick usually do so within three to five days, but it can take as long as 12 days for the infection to pop up. The most common signs and symptoms include skin ulcers, fever, swollen and painful lymph glands, eye pain, eye redness, eye swelling and discharge, chills, exhaustion, and mouth ulcers, and throat pain. Other complications that can occur if left untreated is inflation of the lungs, leading to respiratory failure, infection around the brain and spinal cord (meningitis) irritation around the heart (pericarditis) and bone infection (osteomyelitis)

How can you protect yourself?

The best thing one can do is wear insect repellent and avoid sick or dead animals. But, animal lovers should also be aware the pets can also carry the disease. Now, we are not asking you to not have pets, but just know there tend to be a lot more human infections from cats than from dogs. Unfortunately, there are no publicly available vaccines for Tularemia, but experts recommend protecting yourself from insects. Most people in the US get the disease through a tick bite and mosquito bite, so they recommend you wear long-sleeved shirts and long pants to avoid bites. One can also avoid areas that are known to be infested with insects.

Experts also recommend to handle animals with care, whether wild or inside pets, and cook all wild meat thoroughly, and avoid killing or dressing any animal that appears ill. This also goes for indoor pets, since livestock and pets can contract Tularemia if they eat part of any animal that has been bitten by an infected tick. You should also make sure to keep your pets safe by providing them with flea and tick protection to avoid any further diseases.

This story was originally published on September 13, 2018.