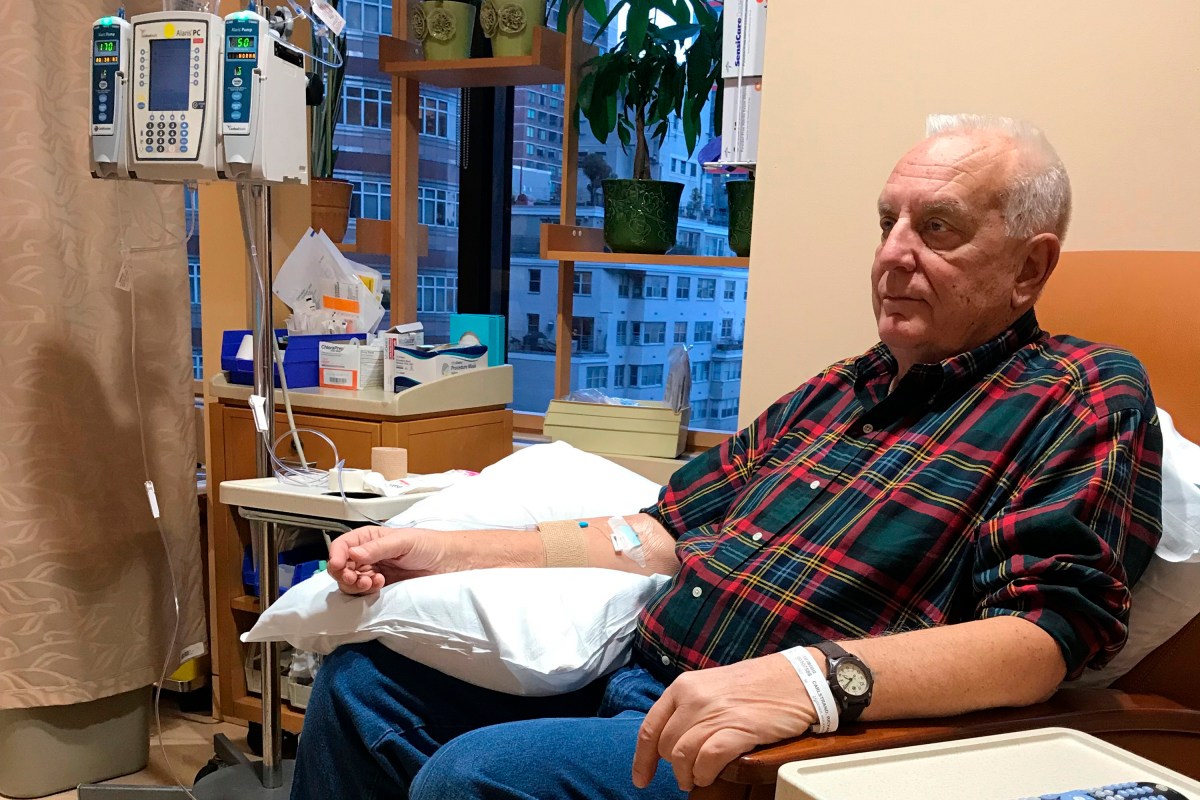 ATLANTA (AP) ? A treatment that helps the immune system fight deadly blood cancers is showing early signs of promise against some solid tumors, giving hope that this approach might be extended to more common cancers in the future.

The treatment, called CAR-T therapy, involves genetically modifying some of a patient’s own cells to help them recognize and attack cancer. Richard Carlstrand of Long Key, Florida, had it more than a year ago for mesothelioma, an aggressive cancer of the lining of the lungs.

“We were going into unknown territories” to try this, he said, but now he shows no sign of cancer and “I couldn’t be happier.”

Results on his and other cases were discussed Sunday at an American Association for Cancer Research conference in Atlanta.

The first CAR-T therapies were approved in 2017 for some leukemias and lymphomas. After being altered in the lab, the modified immune system cells are returned to the patient through an IV, which puts them right where the cancer is ? in the blood.

But that approach doesn’t work well if the cells have to travel far through the bloodstream to get to tumors in the lung, breast, colon, or other places.

“Solid tumors are notorious for not letting the immune cells enter,” and not enough may make it in to have an effect, said Dr. Prasad Adusumilli of Memorial Sloan Kettering Cancer Center in New York.

A bigger worry is that the proteins on solid tumor cells that these therapies target also are found on normal cells at lower levels, so the therapy might harm them, too.

Adusumilli helped design a new CAR-T to try to avoid these problems and tested it on 19 patients with mesothelioma and two others with lung and breast cancer, respectively, that had spread to the chest lining. About 150,000 patients in the U.S. each year face this situation.

The modified cells were injected directly into the chest where the tumors were. A genetic safety switch was added so a medicine could be given to destroy the cells if they caused harm.

After the therapy, one patient was able to have surgery and radiation, and is doing well 20 months later with no further treatment. Fifteen others were well enough to start on a drug that boosts the immune system in a different way.

Eleven of the 15 have been studied long enough to report results. Two had signs of cancer disappear for about a year, although one later relapsed. Six saw their tumors shrink. Three saw their cancer worsen.

There were no severe side effects although some patients had temporarily low blood counts and fatigue.

Grants from the federal government and foundations paid for the work and a larger study is planned. Sloan Kettering has licensed the treatment to Atara Biotherapeutics and may get payments from it, as may Adusumilli.

A second study tested a different CAR-T therapy in 10 children and adults with advanced sarcomas ? cancers that originate in various soft tissues or bones. Unlike other CAR-Ts that are usually given just once, this one was given multiple times, up to 15 in one patient’s case, if there were signs it was helping.

“From a single blood draw we make a large amount of the CAR-T cells and then we freeze them” and give them through an IV as needed, said Dr. Shoba Navai of Baylor College of Medicine in Houston.

Two of the 10 patients had all signs of cancer disappear, one for 17 months and the other for nearly three years, so far. Three others had their disease stabilized. Five worsened despite treatment.

Last year, 48 new cancer drugs were approved by the Food and Drug Administration, compared with two in 2005. This image is from a slide that NCI Director Dr. Ned Sharpless shared at the annual meeting of the American Association for Cancer Research in Atlanta. "Eight agents were approved for acute myeloid #leukemia alone, after decades of nothing at all," he said. Another image in this series shows NCI's Dr. Doug Lowy in Atlanta talking about advances in childhood cancer research. ⠀⠀⠀⠀⠀⠀⠀⠀⠀ “The progress we are seeing in #cancerresearch is tremendous, but we still have much to do,” he said. "The AACR meeting is an opportunity to chart a bolder course for the cancer research community and, most important, for our patients." ⠀⠀⠀⠀⠀⠀⠀⠀⠀ #NCI #NIH #AACR19 #survivorship #cancer

A post shared by National Cancer Institute (@nationalcancerinstitute) on Mar 31, 2019 at 8:17am PDT

Side effects were similar to the other study. The therapy seems safe “and we have early signs that this treatment approach may help,” Navai said.

Several foundations and charities paid for the work.

“These studies are showing there may be a path forward in solid tumors” with CAR-T therapies, said Dr. Louis Weiner, director of the Georgetown Lombardi Comprehensive Cancer Center and one of the conference leaders. It may hold promise for some cancers of the stomach, breast, colon, lung and other areas, he said.

Cost is a big issue ? current CAR-T therapies are around $400,000 but can be made for far less than that in research centers. Doctors say they hope the cost will come down as more come on the market and find their way to wider use.