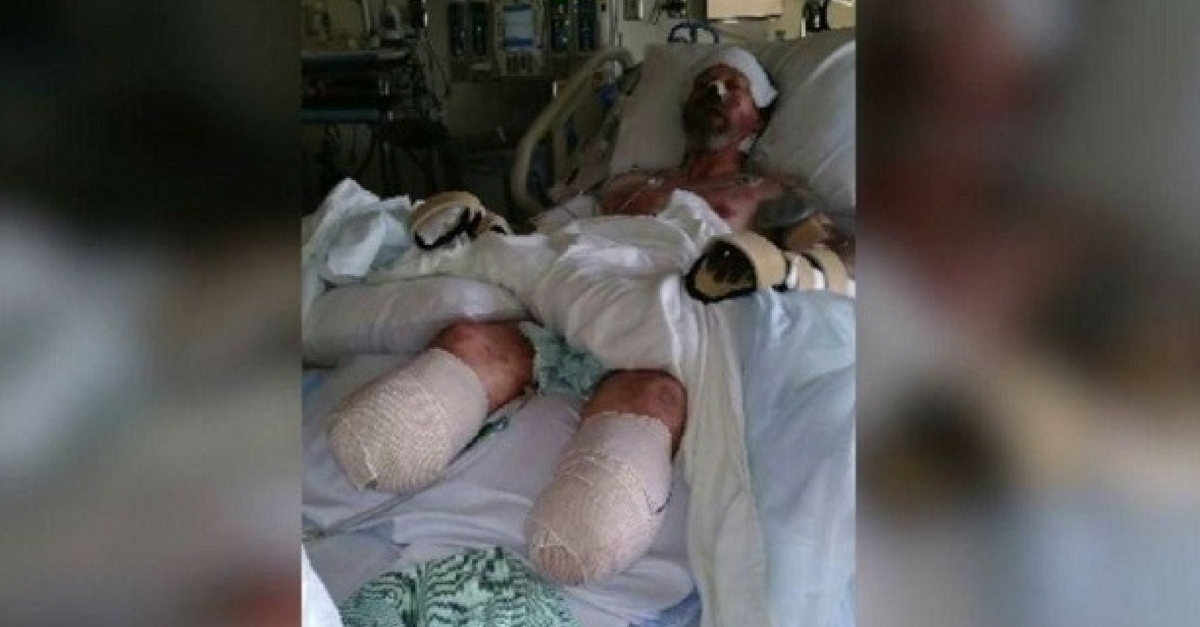 “For some reason, I survived,” Greg Manteufel told Fox 6 in an update on his recovery progress since he had lost all of his limbs to the flesh-eating bacteria, Capnocytophaga Canimorsus. This specific bacteria is found in dog or cat saliva. However, his positive and determined attitude is encouragingly refreshing for his situation, even inspiring his family.

Recently, Greg has been doing his best to get stronger and better using more advanced prosthetic limbs, taking part in a Harvard Medical School study about his case. He is constantly trying to improve in any way he can to help improve the study for future cases. And he’s doing it all fearlessly with his dog, Ellie, by his side.

“A lot of people don’t even make it,” he says. “I happened to make it. Now, I’m trying to make the best of the situation.” His GoFundMe page is still running, even after beating its goal of $145,000, and you can donate!

It’s really important to note the difference between the specific symptoms of Capnocytophaga infections, coronavirus symptoms, and actual flu-like symptoms. With the coronavirus (COVID-19) symptoms also being closely similar to flu-like symptoms, it will be important to consider all risk factors in making sure the right intensive care is given. We can all use a little more awareness during this pandemic in striving to be healthy people.

Editor’s note: This article was originally published on March 19, 2019. It was updated on April 27, 2020, after Greg Manteufel announced he had recovered and shared his experience.

A 48-year-old Wisconsin man is the victim of a flesh-eating bacteria that forced him to have all of his limbs amputated. According to medical experts, Greg Manteufel, of West Bend, Wisconsin, went to the emergency room in February 2019 after he thought he contracted the flu. Yet, after several tests, medical experts revealed that Manteufel had contracted an infection from a bacteria identified as Capnocytophaga Canimorsus, found in dog saliva. The bacteria usually causes severe infections in people with weakened immune systems and is spread through bites or close contact with infected dogs.

The Centers for Disease Control and Prevention (CDC) stated patients infected with the bacteria may have blisters around the bite wound, swelling, redness, fever, headaches, vomiting, diarrhea and muscle, and joint pain. Symptoms typically appear within three to five days but can take up to two weeks. If untreated, severe infections can be fatal within 72 hours of when symptoms appear.

When a client brings up Capnocytophaga, know what they're talking about. http://t.co/TVH7chFFPF pic.twitter.com/wnTUEcreSp

His wife, Dawn Manteufel spoke with Fox 6 about his symptoms, stating that the disease hit him with vengeance, bruising him all over. The disease had made it look as if someone had beat him up with a baseball bat, which had shocked both of them. Her husband has a history of good health and spent his life around dogs, which is why it caught them off guard. Yet, the infection in his blood triggered a severe response in his body.

Infectious Disease Specialist, Dr. Silvia Munoz-Price stated this was a very rare case. Over 99 percent of people who have dogs will never have this issue. Yet, be aware that sometimes these friendly animals, who love to lick their owners’ faces, can and do carry a long list of bacteria that can severely impact human health. The disease can cause a very bad sepsis infection, but usually in people who are immunocompromised and usually follows a dog bite.

The infection caused Manteufel’s blood pressure to drop, which is why the circulation to his limbs decreased, causing them to turn black. Within a week, doctors had to amputate his legs and had to undergo surgery to remove a portion of his hands, as well as half of his forearms. The couple had created a GoFundMe page to cover medical expenses.

“Furthermore, all areas of Greg’s body and tissue was affected by the bacteria and the sepsis, the [doctors] say his nose will need extensive repairs, which means he will need plastic surgery to rebuild a new healthy nose. Greg is going to need several more surgeries, lots of time and his family by his side to get [through] this life-changing event.”

Being as positive as they can, Dawn stated they’d rather focus on what her husband has left, than what was taken away. If you would like to donate to Manteufel medical care, you can do so through the families GoFundMe page. If you suspect you or someone you know has Capnocytophaga, you should consult a medical professional for antibiotic (which is how the virus is treated if caught on time) to stop it from spreading.