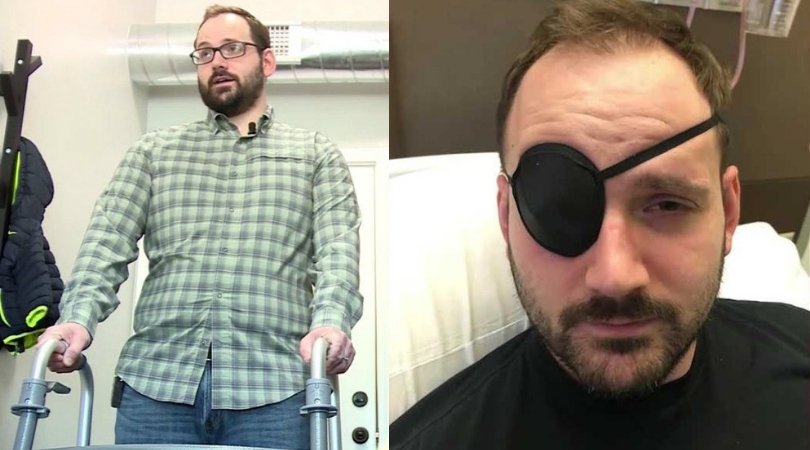 Cracking our joint is pretty much the worst habit we all have, but we do it anyway because it’s satisfying. Admit it. However, 28-year-old Josh Hader didn’t expect to have a major stroke after simply popping his neck. Which makes this whole situation terrifying. Hader apparently popped his neck so hard, that he tore an artery leading to his brain. Yes, the stroke was caused after a good stretch.

According to Hader, the moment he heard the pop, his left side started to go numb. When he tried to get an ice pack for the pain, he couldn’t walk straight. Which is when his father in law rushed him to the emergency room in the middle of the night. Doctors immediately helped him, fearing he might have formed more clot on the tear, which could eventually lead to a life-ending stroke. So basically, this man was so close to death, just for cracking his bones. That’s just shocking to me.

After X-rays, doctors found the 28-year-old man tore his vertebral artery, which is a crucial vessel that leads to the brain. According to Dr. Vance McCollom at Mercy Hospital in Oklahoma, if you have a stroke in that area, you can end up with a patient whose “locked in” meaning they completely understand what is going on, but they can’t communicate, move, speak, or breathe.

YIKES: “The moment I heard the pop, everything on my left side started to go numb,” said Josh Hader, who suffered the stroke. “I got up and tried to get an ice pack from the fridge, and I remember I couldn't walk straight.” https://t.co/tu4FLIkJB2

Thankfully, Hader’s stroke wasn’t that significant but still managed to cause quite a bit of damage. One of the muscles in his eyes was weak due to the nerve being injured and had to wear an eyepatch for several days. Think of it as double vision situation, which caused him to have blurry eyesight. Hader’s condition was best treated with physical therapy and medicine, but he couldn’t walk without a walker for the first few days as he tried to regain movement in his left leg.

What were his most notable strange side effects? Apparently, the 28-year-old had painful hiccups for a week and a half that nearly caused several panic attacks due to how severe the pain was.

This isn’t the first case of neck popping and strokes. Earlier this month a 23-year-old Australia woman, Natalie Kunicki, also harmlessly popped her neck, which almost ended her life. 15 minutes after cracking her neck, she tried to stand up to the bathroom and collapsed on the floor. As a paramedic, Kunicki was embarrassed to call the ambulance, but when first responders arrived, they discovered her neck crack had burst her vertebral quarterly, which is a major artery in the neck.

Kunicki’s rupture caused a blood clot to form in her brain and triggered the stroke which left side was almost entirely paralyzed. Surgeons were able to repair her vertebral artery with stenosis but were unable to clear the clot in her brain. Luckily, they believe that the clot will dissolve over time since it didn’t cause a lot of damage. The paramedic was in the hospital for a month trying to regain movement on her left leg, arm, and hand.

So how exactly can we avoid getting a possible stroke while popping our neck? Well, according to Dr. Vance Mccollom, you should only pop it side to side. He stated, ?If you want to pop your neck, just kind of pop it side to side. Don’t twist it. Whenever you twist it, there’s a risk of tearing that vessel. Say my hand is his head, I suspect he just turned it real sharp and up, sharp and up and back. That’s what really pinched it.?

As a little public service announcement, and a way to maybe save a life here and there, I would like to remind you that May is Stroke Awareness month. Meaning, it’s important to know how to recognize a major stroke to avoid a terrible situation.

Introducing the FASTER symptoms of stroke:

Be careful while popping!