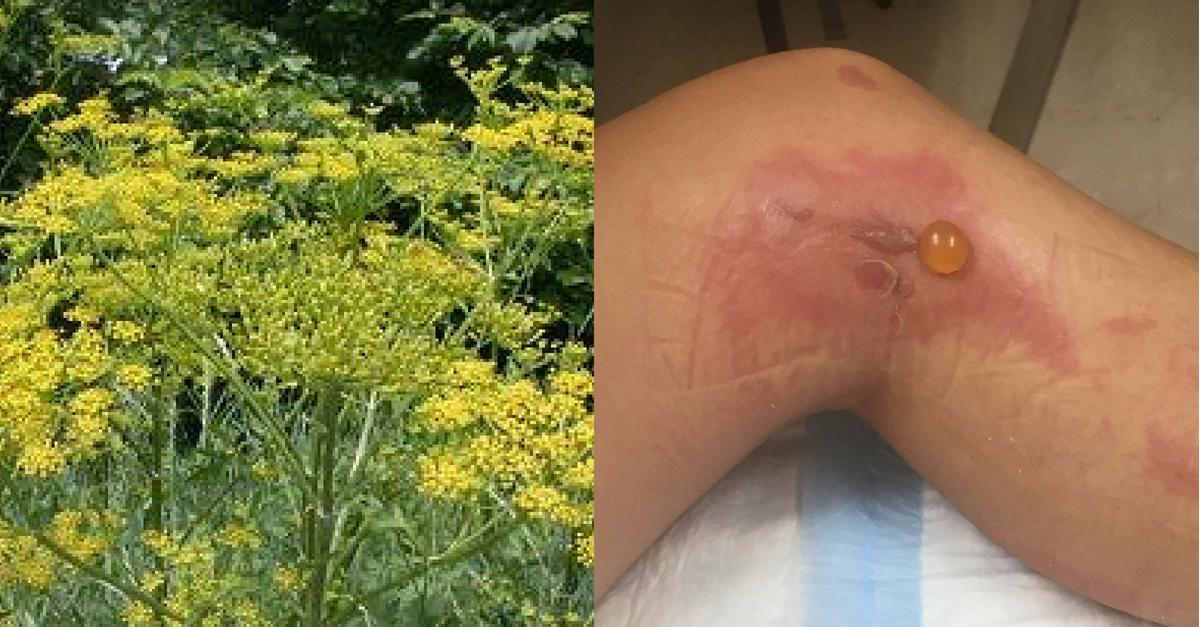 Quick question. What is worse than staying home due to the scorching heat of the summer? If you said staying in because you can?t move due to injuries on both your legs, then you guessed correctly.

Charlotte Murphy, of Essex Vermont, shared a post on Facebook warning about her experience after coming into contact with a poisonous wild parsnip plant. Charlotte was traveling to the southern part of the state for her internship when she stopped on the side of the road and fell over when she lost her balance. Little did she know, she had come in contact with the oil from the parsnip plant. In a series of cringe inducing photos, Charlotte shows her leg with an enormous yellow blister, surrounded by small blisters around it.

?My hope in posting this unfortunate news is to create greater awareness for what WILD PARSNIP is (an invasive species that looks like yellow queen anne?s lace and is found along roadsides/guardrails that has been spreading each year throughout Vermont and other states) and the terrible things the OIL from its stem, leaves, and blooms can do to the skin (I?m not saying everyone will have the reaction I did) and to encourage people to spread the news.?

According to her post, which has been shared more than 30,000 times, she rubbed up against bork leaves of the plant, getting some “plant juice” on her,  and spent a day in the sun (which is exactly what you shouldn?t do if you come in contact with the plant). A few days later she saw some non-itchy bumps appear. A week later, everything turned sour. Much like poison ivy, her itches became so unbearable that she couldn?t sleep due to the irritation. The blisters developed throughout the day to a point where her leg was swollen and she could not walk.

When she arrived at the urgent care she noticed the rash had spread throughout her arms and fingers. Experts were unable to drain the blisters due to the severity of them, and had to end up bandaging her legs and giving her antibiotics in the hope that she would heal. When she returned the next day, they decided to compare her reaction to a second degree chemical burn. Charlotte was placed at the University of Vermont?s Trauma and Burn Center, and is expected to make a full on recovery.

What are Wild Parsnips?

In case you don’t know anything about wild parsnips, don?t worry, we?ve got you. Also known as Pastinaca sativa L., wild parsnips are common in most parts of Vermont and can also be found throughout most of the United States.  This small but dangerous plant is an invasive species that grows along roadsides. According to the Vermont Department of Health, they usually look like yellow Queen Anne?s Lace. Exposure to these plants can cause a crazy skin reaction around the affected area, developing a sunburn when your skin is out and exposed in the sun.

Why? Well, when the chemicals from a wild paring plant are absorbed into the skin, it makes a person more sensitive to ultraviolet light. The chemicals, known as furocoumarins, which are bonded with nuclear DNA and cell membranes, destroy cells and skin tissues.

Usually, wild parsnips are fairly close to the ground, anchored in place by a long thick taproot. It can grow up to 1.5 meters tall with the single green stem being two to five centimeters thick and smooth with a few hairs. Compound leaves are arranged in pairs, with sharply toothed leaflets shaped like a mitten. The seeds around the plant are flat and round, while yellow flowers resemble an umbrella-shaped clusters going 10 to 20 centimeters across.

Fun Fact: The plant is actually in the carrot family, and has a connection with celery, and giant hogweed, which can cause similar skin reactions in people with sensitive skin.

Cheeky #wildparsnip #itburns This stuff is nasty, and showing up everywhere in SW Ontario.

How to Avoid it!

If you see any clusters near you, the best thing you can do to avoid any burns, is stay away from them. Simple as it sounds. If you are worried about your family’s safety, you can call a professional exterminator to help you get rid of them. Do not attempt to get rid of or destroy the plant on your own. That can end in you getting some of the plant residue on you. If you need to, or are scared it may be a wild parsnip, then call poison control. They will probably make you take a picture to make sure the plant is indeed wild. Make sure you cover up if you do, get those long pants and that long sleeve shirt! Best thing to do if you come in contact with it? Wash you skin as fast as you can with soap and water, and make sure you protect your skin from sunlight for at least 48 hours. If you do experience a skin reaction, call your healthcare provider or go to the emergency room as soon as possible.

Watch: The World’s Most Dangerous Tree