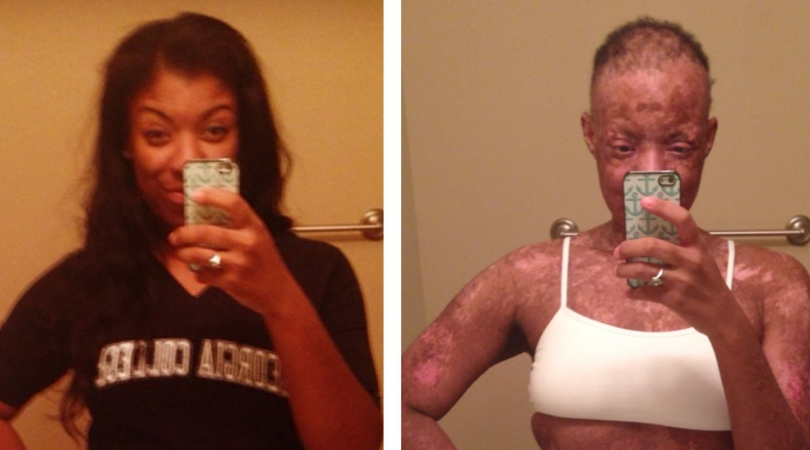 In 2014, Khaliah Shaw underwent severe trauma, after an alleged medical error caused the 26-year-old from Georgia to lose her skin. The woman’s skin burned from the inside out, causing her body to “melt.”

According to the medical record, Shaw went to a doctor after feeling depressed, which is when she was prescribed Lamotrigine. Two weeks after using the medication, blisters broke out all over her body. Shaw said she was in excruciating pain and felt like she was on fire 24/7.

Shaw was eventually diagnosed with Stevens-Johnson Syndrome, a rare skin disorder caused by an allergic reaction to medication or incorrect dosage. After her diagnosis, she was intubated, given medication to help her keep comfortable and was taken to the ICU since more than 30% of her body was affected by SJS.

Shaw spent five weeks in a medically induced coma, where during that time her skin slowly peeled off, loosing 85-90 percent of her skin around her face, neck, back and chest. Now, the 26-year-old is losing her vision, her fingernails will never grow back and her sweat glands are gone. According to doctors, there is no cure for Stevens-Johnson Syndrome and she could relapse at any moment.

Shaw filed a lawsuit where she alleges she received the wrong dosage. Shaw stated the pharmacy didn’t catch the error on time, which is what caused her body to burn from inside out and melt in the first place. Since 2014, Shaw has reportedly received a million dollars as a settlement from the state but the cases against the pharmacy and the pharmacists are still pending.

The lawsuit claims medical bills have reached over $3.45 million, but extensive and prolonged medical care are expected to continue to add to existing bills. She is currently being represented by two attorneys, Robert Roll, and Trent Speckhals, who specialize in medication error litigation. Speckhals believes these errors continue to happen because medical experts always seem to rush instead of taking time to file the right prescription.

?We continue to see the same errors over and over. [They?re] typically the result of pharmacists being too rushed, too busy, filling too many prescriptions and the use of [pharmacy] techs that really don?t have the training and the ability that a pharmacist would. That?s one of the sad things, shocking things about it. It continues to happen at an alarming rate.”

Despite being diagnosed with Stevens-Johnson syndrome, Shaw makes it a point to stay positive and be an advocate for others. She urges others to make sure they know what is going into their body when being prescribed any medication.