Houstonians Come Together in Prayer During George Floyd Protests 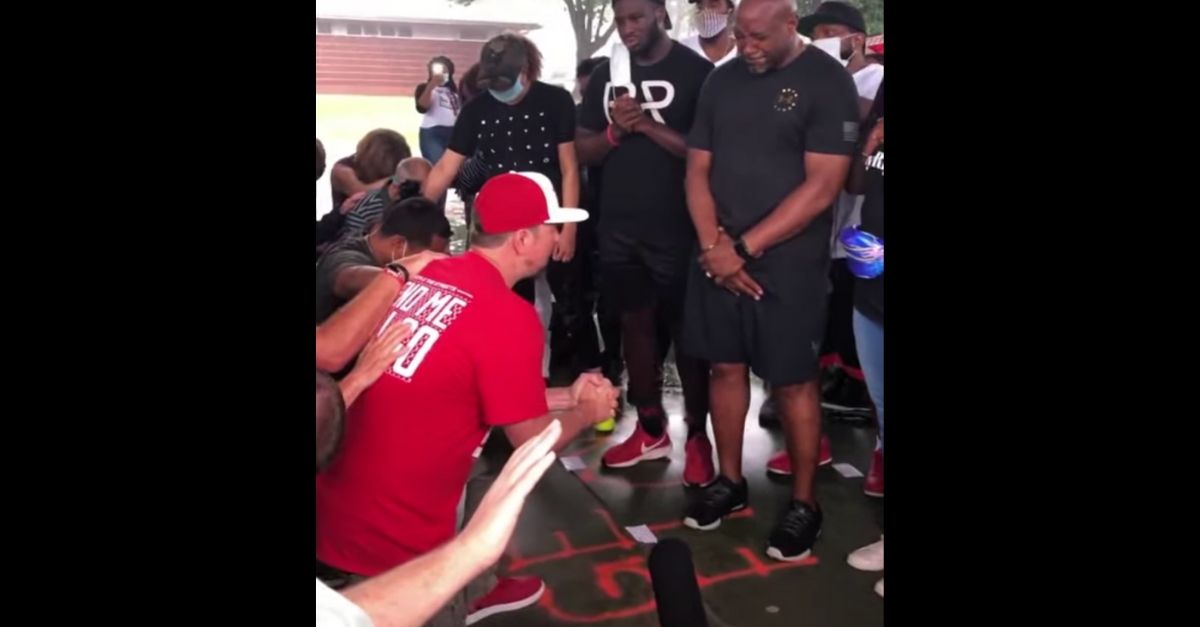 Last Sunday, on May 31, the rain fell heavy and hard in Houston, Texas, as many protestors gathered together to demand justice for the death of George Floyd. The heavy downpour in Houston seemed to represent both the mourning and grieving over Floyd’s death and the call for cleansing of racism and police brutality.

George Floyd’s death by police officer Derek Chauvin, in Minneapolis, Minnesota, sparked protests and riots not only across the country, but also the entire world. The Minneapolis police officer was caught on video with his knee on Floyd’s neck, resulting in Floyd’s death by asphyxia. That was enough to cause violent protests in big cities such as New York City, Los Angeles, Dallas, and Atlanta. However, Houston, Texas, where George Floyd was raised, reported more peaceful protests.

With conversations of public safety heavier than ever, Houston’s Mayor Sylvester Turner commented, saying, “I could not have been more proud of how the city responded yesterday. My hope is that things will stay peaceful in Houston.”

George Floyd was raised in the Third Ward in Houston, Texas, known around the community for playing basketball and doing outreach work at Cuney Homes. A video by KPRC 2 Click2Houston shows Houstonians gathering at Cuney Homes, taking center court over where George Floyd’s name is now etched into the ground. The gathering was held as a prayer vigil, distinguishing the peaceful protest from the violent protests evidently seen on social media. The video goes on to show the crowd, split in half by race, praying with and for one another in complete unity.

The purpose of holding the prayer vigil was not only to honor George Floyd, but also to apologize to the African-American community and ask for forgiveness for the unending history of blatant racism. It resulted in the African-American community accepting the apology and re-joining the others, as they all continued to pray for healing for each other.

Many other Houstonians hosted and attended prayer vigils as their way to participate in the George Floyd protests. Cuney Homes wasn’t the only place to hold one, and the other prayer vigils were held all over Houston at all kinds of places.

Praying for one another, one says, “Father God we asked for forgiveness from our black brothers and sisters for years and years of racism.” With eyes closed and a hand on his chest, another says, “Pray for my white, black and brown brothers and sisters who have had the courage to expose blatant racism in my own heart.” And the African-American community is seen responding by kneeling down and praying in response.

“Let’s not tear up our cities. Let?s not dishonor authority. Let?s not dishonor others. Let?s do what we have to do but keep it respectable and honorable so others can align with us,” said co-organizer of the Cuney Homes event, Johnny Gentry, lead pastor at Free Indeed Church. His co-organizer, Bobby ‘Trey 9’ Herring, founder of the non-profit “Eyes on Me,” told Fox 26, “We need to show a symbol that we truly do apologize for what’s been done to our black brothers and sisters. With Colin Kaepernick taking a knee, it tore us apart and I thought we’re going to take a knee to unite us.”