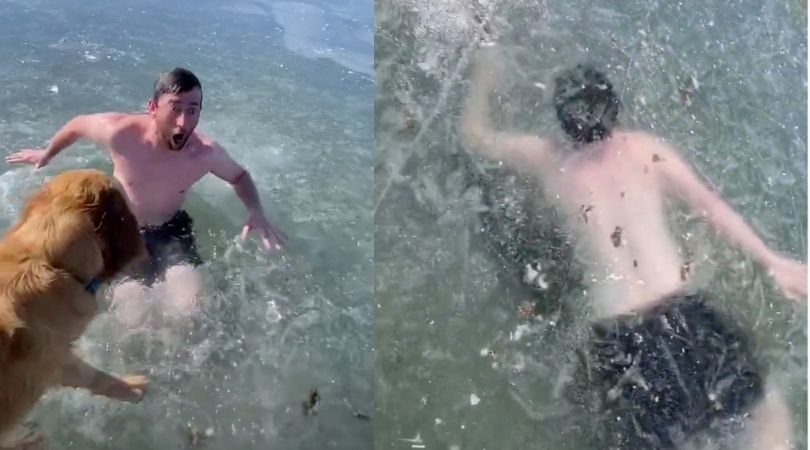 Heads up, you might not want to watch this if you have anxiety. I nearly chewed my nails off watching this. This is exactly how you die ladies and gents. Like this. By doing dumb “stunts and tricks” that will probably get you killed. Seriously, I’m not kidding when I said I panicked the whole way.

Look at this man just getting inside a frozen lake and swimming across it nonchalantly, only to realize that he can’t find his way out. So he tries so hard to find it by swimming back to the point of origin. Panicking, he realizes he is completely lost, so he desperately swims left and right, stretching his arms in an attempt to find an exit. After an excruciating minute, he finally pushes through and his arm shoots up straight from the water, and the man pulls himself up gasping for air, realizing that well, he almost died.

I have never been this close to dying. I didn’t think my eyeballs would freeze so quick. The surface of the water where the hole was didn’t look any different than the bottom of the ice. When I flipped around and felt solid ice I thought I was at the hole. When I wasn’t that’s when I decided to head back and follow the dust I kicked up. The dust I kicked up had drifted and led me further away. I then tried to break the ice with my back, you can see in the video. I don’t know what made me turn around one last time. I was so short on breath I couldn’t really see anymore. I had accepted that was it and I wasn’t going to make it. I swung my hand at what I though was just a lighter spot of ice and my hand came through. I then got a ton of energy to stand up. It took 2-3 breaths to regain my vision after resurfacing. Aftermath is in the other video. 📷: @abbytodolist was filming. When there are scary moments I joke a lot. She genuinely thought it was another one of my jokes and didn’t recognize the severity of the situation.

Nah, nope. This is a big pass. Who in their right mind does this? What was he thinking? Most importantly, what was the whole point of this and what exactly was he trying to accomplish? Apparently Jason, at least I think his name is Jason because that’s the name on his Tiktok account, does this for fun.

His Instagram is also full of wild adventure posts and outings, that makes you think, ‘yeah sure, he probably does this often.’ He goes around the world completing things he wants to check off his bucket list. But this one was apparently too much. He even noted through the Instagram post, “I have never been this close to dying. I didn?t think my eyeballs would freeze so quickly. The surface of the water where the hole was didn?t look any different from the bottom of the ice.”

I almost didn’t make it… TODOLIST #231 swim from point to point under the ice ✅ish video coming soon. 📷: @abbytodolist @deeohhgeetodolist

He then goes on saying that he decided to swim back to the entrance hole after failing to break the ice with his back. He also couldn’t see anymore since the water was so cold that his eyes were giving up. Luckily, he was able to push through and find his way out unharmed. But geesh Louise. If this man’s to-do list includes almost dying in front of his girlfriend, who was recording, then by gosh, he can cross it off. If I was her, I would be so angry at him for making me record it, and for attempting something as dangerous as this. I’m just glad he’s alive.

Hey internet, stop trying to get yourself killed!