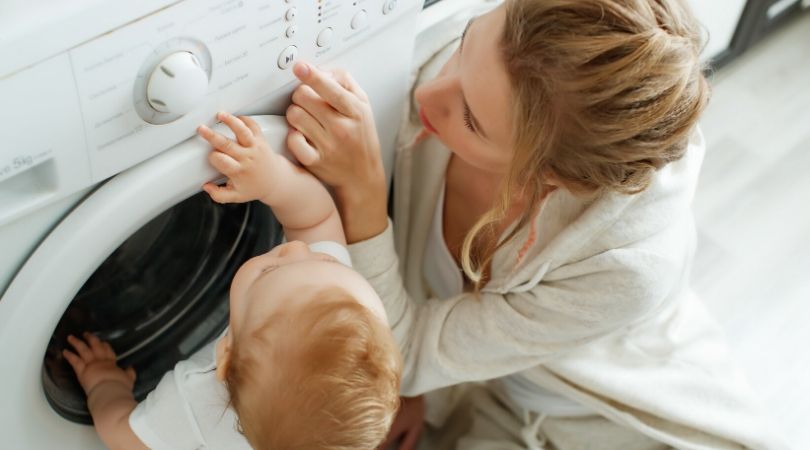 A Colorado mother is sharing, what could have possibly been the worst day of her life, to her Facebook followers, in an attempt to prevent a situation like her?s.

Alan and Lindsey McIver, of Conifer, had just bought a brand new LG front loading washing machine, instructing their children to stay away while they were installing it. According to a Facebook post by the mother of 3, the couple was woken the next morning by their 4-year-old son. The mother stated the son was crying so hard, he was unable to talk only muttering the words ?Kloe. Inside. Washer.? Before realization hit, the father ran down the stairs, where he saw their 3-year-old daughter was trapped inside the washing machine.

The mother stated the washing machine was tumbling and quickly filling with water, unable to hear the little girls screams due to the pressure. Luckily, within seconds, Lindsey and Alan were able to open the machine, pulling the little girl out. Kloe only suffered small bumps on her head.

The McIvers were able to find a child lock feature among the machine settings, utilizing it to keep their children away from playing in it again. The Mother’s post quickly went viral, explaining her experience to users, and has more than 270,000 shares as of now.

Afraid she would be ?mom-shamed?, Lindsey was hesitant to write the post, but realized this is a situation that could happen to anyone. She decided to take the negative situation, and turn it into a positive situation, to warn parents and promote honest dialogue about making simple mistakes.

LG did respond to the incident, providing a statement, stating all LG washers and models do have a child safety lock available. There is a child lock button on the control panel, which is the one users should press and hold for 5 seconds to activate it. Once activated, the machine cannot be used and a ?CL? code will display.

The National Center on Early Childhood Health and Wellness are encouraging parents to keep their dryers and washers closed when not in use, and take advantage of the safety features provided on the machine. Once a latch door is closed, there is no way it can be opened from the inside.

To protect your child, experts suggest using these safety features to prevent accidents, lock the door to the room where the appliances are, and purchase any additional safety locks for small children. Unfortunately, washing machine accidents are more common than we think, over 2,000 children a year are seriously injured by washers.

Yes, mistakes happen, and yes, they can be prevented. At the end of the day, we are all humans, which is why we should all help each other by sharing our experiences to avoid another situation like this. Thankfully, little Kloe is okay and safe.