When Brett saw Meg hanging out at their apartment complex’s pool, he was immediately taken aback by her beauty. She had a beautiful smile and bright blue eyes, and everyone who surrounded Meg loved her; she was the life of the party.

Brett knew she was something very special from the beginning, but he was a little too shy to make the first move. He wanted to get her attention, but didn’t know if he would be able to muster up enough confidence to even ask her name.

Luckily, opposites attract, because before he could overthink it any further, Meg was walking towards him, determined to capture the attention of the quiet, cute guy admiring her from afar. And what’s a better icebreaker than a corny pickup line? Meg explained that her first words to him started their entire relationship.

“I walked over to him, and I had the corniest pickup line ever. I told him that I wasn’t hitting on him, but that I thought he had really beautiful eyes. To my surprise, he returned the compliment immediately. Being the person that I am, I then close my eyes and told him that he didn’t even know what color my eyes were. To my surprise, he knew they were blue. As dumb as it sounds, in that moment, I knew he was something special.”

This very attractive couple started their relationship as friends. They worked out together, discussed their faith, opened up about their past, and shared what they hoped for the future. They both had a passion for running, and many of their most intimate conversations took place during runs.

Their relationship was easy; it was natural. They connected from the very beginning, and as their connection began to grow, so did their feelings for one another.

Meg explained that although they connected immediately, Brett took a little convincing when it came to taking their friendship to the next level.

“He would pay for my meals when we would go out, but he wouldn’t call it dating! He said we were just friends that liked to have meals together. We were going on dates, these were dates! I just wanted him to call  them what they were. I think he was playing hard to get, and I guess it worked. I fell for him pretty quick. They say when you know, you know, and I knew.” 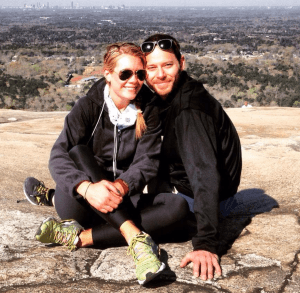 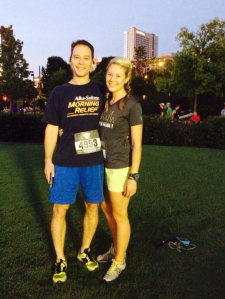 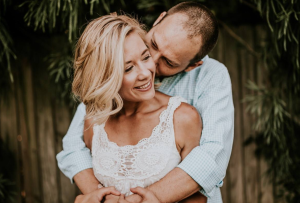 It was on their second date that Meg knew she wanted to spend the rest of her life with Brett, and she wasn’t afraid to lay it all out there. Brett explained that although he was a little caught off guard, he wasn’t turned off to the idea of spending the rest of his life with Meg.

“It was officially our second date. We had just volunteered  at the Atlanta Men’s Shelter, and we grabbed some dinner in the Virginia-Highlands after. At one point, when we were eating, and she told me that she could see herself marrying me, or someone like me. I didn’t run for the hills! Well, I may have run, but there was a crowd and I didn’t want to make a scene. Meg says that she had to convince me to get on the same page as her, but there really wasn’t any convincing to do. I knew I wanted to be with her. I mean, she’s everything I could ever want.”

When the couple decided that it was time to take their relationship to the next level, Brett popped the question, and Meg didn’t waste any time with the planning process. The venue, flowers, food, music, and wedding party — done! This couple was on their way to their dream wedding.

Brett told us that although this was a very overwhelming period in his life, he wanted to make it an enjoyable time in their lives.

“I was very overwhelmed with my job and everything else that was going on. When Meg asked if we wanted to have a joint bachelor-bachelorette party, I didn’t really want to go. Despite not wanting to go,  I knew it would be a good time, so I agreed that we should continue with the trip.”

The couple headed down to Naples, Fla., to bask in the sun and celebrate their fast-approaching wedding. Meg was surrounded by her best friends on the beach, and Brett was hanging out with the guys, playing football. It wasn’t anything wild and crazy, just good friends enjoying one another.

Then, the unthinkable happened.

“While Meg was on the beach hanging out with the girls, I decided that I wanted to swim in the ocean. I ran into the ocean and dove in, like I had many times before. This time was different. As soon as my head entered the water, I felt an overwhelming sensation all over my body. I had hit a sandbar, and I couldn’t move any part of my body. I was laying in the water face down, panicking like anyone in that situation would. But then, my panic went to peace. I was laying in the water holding my breath, hoping someone would notice that something was wrong.”

Meg’s friend Kelsey, a trauma nurse, glanced over at the ocean and noticed that Brett was floating on the water in a very strange manner. Although she wasn’t very concerned, she thought it would be best to check on Brett to make sure everything was fine.

When Kelsey got to Brett, it was obvious that Brett was completely paralyzed. He recalls what that moment was like.

“Kelsey swam over, turned me over, and she asked if I could feel anything, and I said no. I couldn’t move my body. All the girls ran over to me, and then I saw Meg’s face. The look on her face — I knew whatever had happened to me was catastrophic. I just kept telling her that I was sorry and that I loved her. I wanted her to know how sorry I was.”

Shortly after, Brett was rushed to the hospital. There wasn’t enough room in the ambulance for Meg to ride along.

“We drove separately. The hospital was an hour away, and the entire time, I was praying. I was asking God to give Brett peace. I didn’t understand what was happening and why or how this could happen. I prayed the entire time. When we got to the hospital, the doctors brought us to a back room and explained to us that Brett had broken his C5 vertebrae, and that he would most likely be paralyzed permanently. He was covered in wires and hooked up to tubes. When I saw him, my heart sank.”

While at the hospital, Brett had to be incubated, which prevented him from talking. He explained that these days in the hospital were the hardest.

“I couldn’t eat. I couldn’t drink. I couldn’t talk. Those days and nights were the hardest point. But in this time of desperation, it just shows how strong Meg and my relationship is. We learned to communicate through my eyes. I learned to blink, and we created an alphabet system that went along with my blinking. She was able to get my Social Security number, my insurance information, passwords to locked accounts. It was incredible that we could have full conversations just using our eyes.”

While in the ICU, Meg’s sister started a GoFundMe page to raise money for the couple. In less than a week, over $100,000 had been raised by friends, family and members of the community who heard Brett’s story. The couple is eternally grateful for the generosity of everyone who supported them during that time. 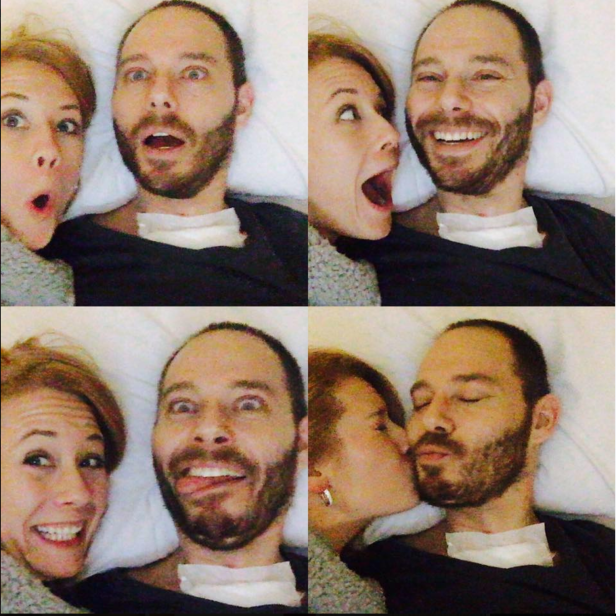 “Meg’s sister set up the GoFundMe account; I didn’t even know that it had been created. I’m very introverted, and I didn’t want my situation to gain a lot of attention, but wow. The kindness and generosity that people showed was incredibly. God created us to be good, and people responded to my situation in such amazing ways. We are so incredibly lucky. The donations have helped immensely. There are a lot of costs associated with my injury, and it helped more than people know.”

While Brett was recovering in the hospital, Meg returned to her full-time job. The wedding had been put on hold while the couple tried to get used to their new life. Brett explained that he was terrified Meg was going to go.

“I kept asking her when we could have the wedding. I was terrified that she was going to leave me. I wanted her to be with me, but I also wanted her to have an easy, unbroken life. It was a lot to think about. She was the best thing in my life, and even though I pushed her away, I knew if I lost her, I would be losing more than half of who I am. Meg was working full-time, and one day after work, she came in and told me that she was ready to start planning again, she was ready to start our life together.”

At their wedding, the couple was surrounded by their closest friends and family. They finally got the dream wedding that they had been planning, even if it looked a little different than their original expectations.

“This situation had really taught us that there are so many small things in life that aren’t worth losing sleep over. If you are surrounded by good people and your loved ones are close, that’s what matters. Love looks different for everyone. Love IS different for everyone. Our story is different, it’s unique, but it’s who we are. I choose to love Brett because he’s my best friend; he is my kind of weird.”