When Trent first saw Meredith behind the bar, he knew he wanted to tap that for the rest of his life.

Well, that’s not exactly how the story goes, but it’s a good place to start.

At the time, Meredith Stone may have been serving drinks from behind the bar, but she was not a bartender. Meredith was a very talented evening reporter for a local Savannah station, which was hosting a “Dancing with the Stars” charity competition. Part of the participation included raising money for Savannah CASA (Court Appointed Special Advocates for Children).

Meredith was a lover of all things beer, so naturally, she wanted to incorporate that into the fundraising component. That’s when she decided to team up with local bars to guest bartend “Ladies Nights” around Savannah. Women would receive discounted drinks, a portion of all sales would be donated the cause, and residents would get to hang out with their favorite local reporter — a winning combination.

After a full day of reporting, Meredith made her way to World of Beer, the local bar where she would be making a guest appearance that night. Trent saw the “Ladies Night” event being promoted via Facebook and decided to check it out.

“I mean, why wouldn’t I go? I like drinking. I like charities. I like women. It sounded like a good time! I was the first person to show up and the last to leave. I immediately noticed Meredith when I took a seat at the bar; she was really cute. I had a female friend with me, just a friend, and she casually told me that I was going to marry the cute bartender… and I was totally OK with that. Maybe it was female intuition, but she couldn’t have been more right.”

When Meredith’s shift was over, she was exhausted and starving. She was not trying to mingle with strangers; she wanted to eat her dinner in peace.

“After my shift, I really was past the point of exhaustion. I had worked a full day in the field and then did another shift at the bar — I was so tired and hungry. The friends who came out to support my event all went to dinner after; I was surprised to see Trent tag along, too. He sat next to me at dinner and just would not leave me alone. I was elbow-deep in a plate of wings and I didn’t feel like telling him my whole life story at that exact moment. I snapped at him; I can admit that I was rude to him, and I felt really bad about it later. After dinner, he walked me to my car, and I hugged him goodbye. I later added him on Facebook, hoping he could look past how grumpy I had been.”

Trent didn’t hold her “hangriness” against her. The two connected over social media. A few months later, they went on their first date.

While on the date, Meredith made it very clear that she wasn’t planning on staying in Savannah much longer. Her contract was up, and she knew if she wanted her reporting career to progress, she would need to move to a city with a higher-ranking market. As Trent remembers it:

“When she told me that she wasn’t going to be in Savannah for much longer, it didn’t bother me. I was just so happy that she even wanted to hang out with me while she was here. I knew she was special from the beginning. She was so intelligent, beautiful and independent, it was hard not to fall in love with her. When I was around her, I was always laughing. Every time I saw her, it was like a new adventure.”

Trent wasn’t the only one feeling these strong emotions. Meredith was definitely on the same page.

“It was hard for me to be vulnerable and let Trent in. I didn’t want to let him close, and I just couldn’t figure out why. I guess I was scared of getting attached to him because I knew he was special. He was so nice, but I didn’t want him to be nice to me. Dumb, right? I think my barriers really came down when he told me that he would move with me wherever I went. It was shocking to hear. This guy I had been seeing for two months was so committed to making this work that he would uproot his life for me, after only two months? It made me like him even more.”

As time went on, this couple’s love continued to grow. From Southbound Brewing Company to the World of Beer, this brew-loving couple made every outing their own little adventure. When the time came to pop the question, Trent knew that it would have to be something special.

“We are both such beer lovers, and it really was a common interest that brought us closer over the years. I knew I needed to incorporate our love of beer and the memories we shared into the proposal. This all happened on Halloween night, too. We started the night at our friend’s brewery, Southbound Brewing Company, and then headed over to the World of Beer, the first place I ever laid eyes on her. We then went to some of our favorite spots for a variety of appetizers and more beer, of course. I told Meredith that I need to get something from my car, so we headed back to a square, where I had parked. I got the Shutterfly book I had created and I gave it to her.” 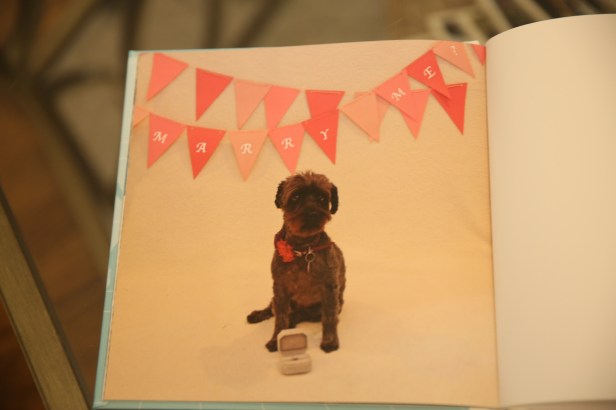 When Meredith got to the last page of the book, she was greeted by a picture of their pup. Above the picture was written, “Marry Me?”

“I was sobbing. He was sobbing. We were having this wonderfully sentimental moment, but it was still Halloween. There were people partying all around us, and there was actually a drunk bumblebee passed out on the bench behind us. It was beautiful, hilarious and so, so incredibly special. It just proved how much fun our future was going to be with one another.”

The couple has been happily married for two years now, and in November, they will welcome their first child — a brewtastic baby boy. When we asked the soon-to-be parents what they were most looking forward to about parenthood, Trent didn’t have to think twice.

“This baby boy has so many beer-related onesies, it’s not even funny! I can’t wait to put my son in the off-roading stroller we bought and have the three of us check out local breweries. We are going to have such a cool little family. I can’t wait.” 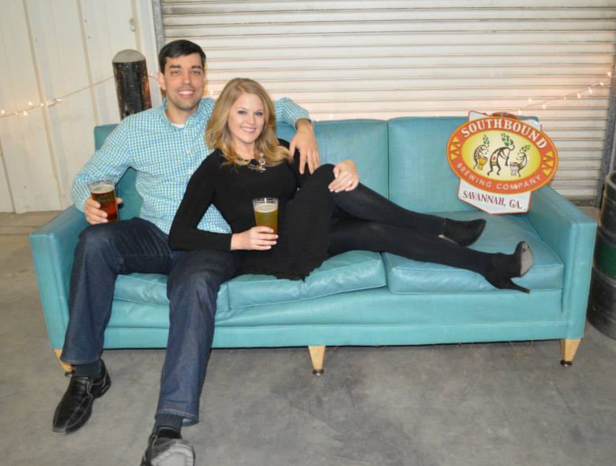 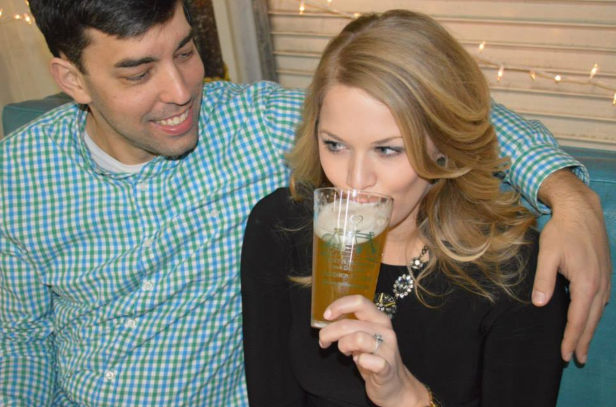