A 60-year-old Jacksonville Beach Post Office mailman spends his days off cleaning…in a cemetery. Unlike us, who decide to binge-watch Netflix and eat an unlimited amount of chips and salsa on a day off, Clarence Hollowell heads out to rundown cemeteries and spends his Sundays cleaning Veterans’ headstones. Yes, this man voluntarily cleans headstones, because he wants to honor fallen soldiers. It sort of makes me question what I do in my free time.

During Memorial Day weekend, Hollowell was at the Old City Cemetery in Springfield, where he cleaned the headstones of Capt. S. L. Tibbitts and 1st Lt. Joseph H. Huau. But he doesn’t just clean them and call it a day. Once he finishes cleaning, he then writes their names on a sheet of paper and tries to learn about their life using Ancestry.com. Hollowell, who comes from a military family and served in the U.S. Army, stated that cleaning the graves helps the community and gives him a side project to keep him busy.

According to Hollowell, it usually takes him about two to three weeks to clean the headstones. In total, he has cleaned around 600 graves, using a plastic scraper to remove growth, a soft bristled brush, a toothbrush for smaller areas, water, and a special cleaning solution called D/2 Biological Solution, he orders online. The D/2 Biological is the only solution approved for use at national cemeteries, costing $40 per gallon.

Some men golf on their days off. Clarence Hollowell, 60, cleans headstones. This morning, I followed him around the Old City Cemetery and watched the process. “This is my way of honoring America’s veterans,” he said. @jaxdotcom story coming soon. pic.twitter.com/Vq7KiwMZN2

The 50-acre cemetery is split off into three sections, one for the emancipated slaves, Masons, Catholics, Jews, and Confederate soldiers. Hollowell makes it a point cleans veteran graves in all the areas, except for a pristine patch that is already regularly maintained by the local Sons of Confederate Veterans branch. His latest “clean” was a round of headstones from members of the U.S. Colored Troops, which is an Army branch from early 1800 compromised of minority groups.

The 60-year-old begins his process by scraping off any growth, pours water, and goes over crannies and nooks with a bristled brush. He then sprays the “special solution” and leaves it for 15 minutes so the stone can absorb the product. The product then kills off bacteria, leaving it a place yellow color before turning bright gray.

This is truly amazing. This man is cleaning headstones out of his own will because he wants to remember those who fought for us. If that’s not adorable, I don’t know what is!  We definitely need more people like Hollowell.

This article was originally published on June 3, 2019. 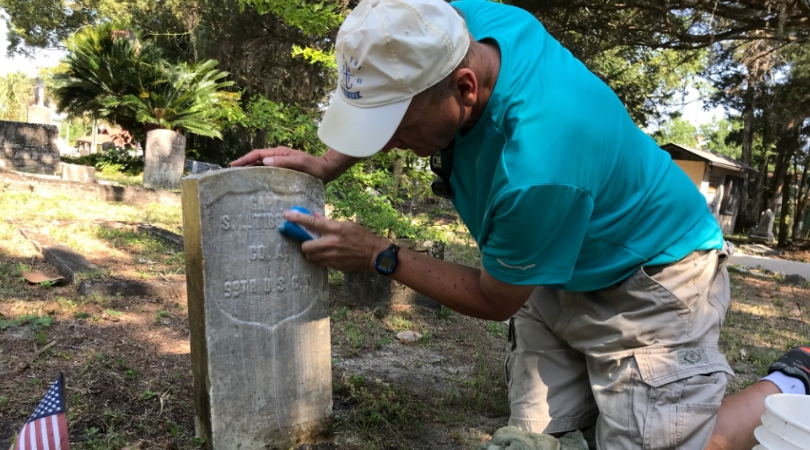