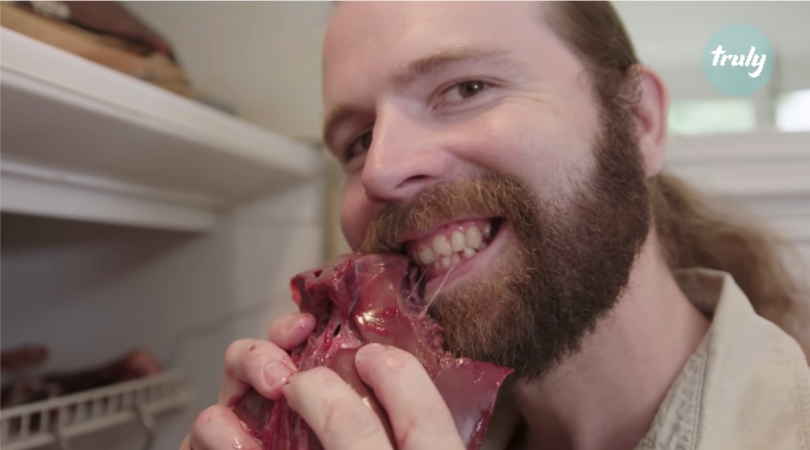 You know when you come across a story on the internet and you think, “This has got to be fake. There is no way someone does this willingly.” So then you continue to dive in deeper and research to see if there is an actual story there, hoping that it is actually fake. Well, this is that story, and it’s a gross one. But it turned out to be true.

35-year-old Derek Nance is more than a…let’s say, carnivorous man. Why, you ask? Well, he has been on a literal raw meat diet for 10 years! Yes, I know, I know, so gross. Sorry vegetarians, you might want to skip this one. Apparently, Nance’s diet consists of everything from sheep’s stomach to actually smoothies made of the animal spleen, testicles, and liver. He calls those his “on-the-go” snack that gives him energy. Because banana smoothies are so overrated and liver smoothies are the new hype. Dear God.

If you don’t believe me, just watch this man on camera (courtesy of Barcroft TV) biting into all the raw meat he can find, where there is even blood oozing under it. The meat lover says the only parts of the animal he won’t eat are the horns and hooves. Which is ridiculous to me because if you’re already eating liver and balls, why not scrape out some hooves?

What’s the most unusual part of his diet? “High meat,” which is essentially rotting animal flesh. With mold and all, which he eats right off the bone. The fermented flesh releases bacteria that give a “sense of euphoria” when consumed, hence it’s called “High meat.” He explained how decomposed flesh is part of a healthy diet because it stimulates his appetite, saying, “Whenever I get a fresh animal in, there’s something about the fresh blood that just stimulates the appetite. Decomposed flesh is a part of a natural diet of almost every predator on this planet. There’s plenty of animals that you can see that scavenge.”

Every month Nance goes out to organic family farms and chooses live animals to slaughter and butcher himself outside in his back yard, eating every part of the animal. He does say that he adds variety to his diet so it won’t be “bland.” Oh and also, he’s a father of four and believes that eating raw meat is safe for his children to consume. His partner though, she ironically used to be vegan and won’t eat raw meat. Which is the actual definition of opposites attract. I wonder if she asks him to brush his teeth whenever they kiss?

Now whether this man actually eats raw meat every day or not, well, who knows. There’s no way of testing…but by the way his fridge looks and the way he chews it, heck I believe him. I just wish I didn’t. But to each their own, right?

My question here is, can’t you get physically sick from this? Isn’t this why there are so many signs that say one needs to make sure the meat is cooked all the way? I can’t see this being healthy, y’all. I don’t care if this has all the vitamin C, D, E, or F in the world, just put it on the grill first. There are a million ways to get your nutrients. Or just go on a paleo diet or something. Some peoples eating habits are weird.

Watch: Can You Cook a Steak with Mayo? This TV Chef Says, Yes