These Cities Have The Highest Job Growth in Each State 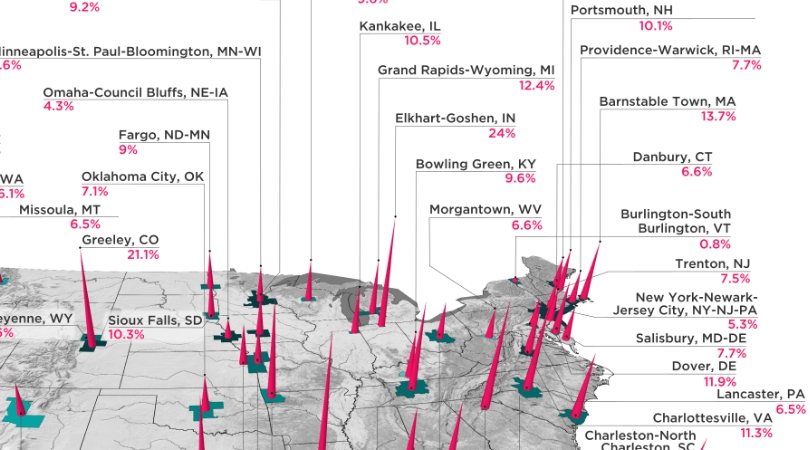 How Much
How Much

Hey you, yes you! Are you looking to start a new career path? Maybe you just want a change of pace and are searching for a new job? Well, we’ve got you! A new map from cost information website How Much just released a map showing used employment data from the Bureau of Labor Statistics to track job growth between 2013 to 2018 in 381 metropolitan areas!

The map shows the percentage of job growth change in the best city from each state over the past few years. Honestly, you’ll be surprised by the growth of employment in some of these U.S. cities. The map also shows which smaller or mid-sized cities are expanding and where business is taking off. For example, Austin, Texas, where job growth is at 18.4 percent, the main drive of highways jobs recently has been the business and professional service sectors.

Similar to Austin, there is Reno, Nevada, which has an 18 percent spike in jobs, due to the growth in the city’s manufacturer in information and business service industries. What city has the highest job growth? No other than Louisiana! Since 2013, Lake Charles, Louisiana has seen a 28.3 percent spike on job creation, the highest in any city in the country!

Most jobs in Lake Charles over the last five-year have occurred in logging, mining, and construction industries, which mean that the boom hasn’t quite produced gains across all industries, but still…when in time of need, a job is a job.

Of course, jobs are interchangeable and just because a city has a seen a huge increase in jobs means it has the right job for you. As well as wages, just because there are more jobs doesn’t necessarily mean there are higher wages in the city. Five of the country’s top 10 metro areas for job growth have ideal household incomes under $60,000.

As for the cities with the worst job growth…that go out to Cheyenne, Wyoming and Anchorage, Arkansas, and Burlington, Vermont where they only saw 0.8 percent growth. As for you folks in New York, the change was just 5.3 percent more.