Student loans are different from almost any other form of borrowing. Unlike credit cards or other unsecured debts, they can rarely be discharged in bankruptcy. (You can learn more about the implications of bankruptcy here.) Legally, it’s better to think of college and grad school debt as akin to a child support payment.

The $1.3 trillion student loan crisis has many causes, but the slow erosion of consumer rights to gain student debt relief ranks right near the top. That $1.3 trillion debt is truly an anchor for life to the 44 million Americans who owe it. (And not paying those loans can have pretty severe consequences, including serious credit damage. You can see how your student loans affect your credit by a free snapshot of your credit report every 14 days on Credit.com.)

How it all started

The trouble began in the mid 1970s, as student loans became common and urban legends around “deadbeat” former students started to spread. In 1976, Congress considered a dramatic change to the nature of student loans — taking them out of the bucket that makes them similar to credit cards or personal loans, and moving them into the bucket that governs criminals like tax scofflaws. Back then, Congress was wise enough to commission a Government Accounting Office study, making such a step permanent.

RELATED: Is it possible to get an affordable education?

The study came back showing that fewer than 1% of student loan borrowers had declared bankruptcy. That led Rep James O’Hara (D-Mich.) to say it would be grossly unfair to lump them in with the deadbeats. Soon after, the U.S. Senate voted to strip the provision from a proposed bankruptcy reform bill that made college debt non-dischargeable. But for reasons unknown, a group of Congressmen in the House, led by Rep. Allen E. Ertel (D-Pa.), held firm to their conviction that student loans were creating a moral hazard. They won the day, and non-dischargability of student loans was included in the Bankruptcy Reform Act of 1978.

The 1978 limitation meant students had to try to pay their loans back for at least five years before they could seek relief in bankruptcy court. Even today, critics of the way bankruptcy laws work don’t find fault in that notion — to prevent someone from leaving school and immediately erasing their debt before making an honest effort to earn an income.

However, the 1978 law opened the door for further tightening of the debt noose on borrowers, which happened methodically over the next decades. In 1990, the repayment period before a discharge was extended to seven years. The Debt Collection Improvement Act of 1996 allowed Uncle Sam to garnish Social Security checks. Then, in 1998, the seven-year ban became infinite. Loans made or guaranteed by Uncle Sam to students could never be discharged, with very few exceptions.

Worse still, in 2005, the permanent ban on bankruptcy for student borrowers was extended to private student loans — those that have nothing to do with Uncle Sam. Private banks lending teenagers money for college now hold a “till death do us part” contract.

Steven M. Palmer, a Seattle-based bankruptcy attorney who has written about the history of student loans, said it’s important to keep some perspective about what Congress might have been thinking back in the 1970s.

“Back then, the cost of education was so much less,” Palmer said. “The total amount of debt was a tiny fraction of what it is today … The system has led us to where we are now, where everyone has to take out student loans. And then they are getting out of school and not able to find jobs.”

For the desperate student borrower, there is an exception to the bankruptcy code, known as “undue hardship.” But practically speaking, that’s legalese for “nearly impossible.” (Disabled borrowers may also qualify for a total disability discharge of their education debt.)

An attempt to discharge a student loan requires a separate legal process from a traditional bankruptcy, called a Complaint to Determine Dischargeability. It’s an adversarial process that can require discovery, depositions and even arguments in court against Department of Education lawyers.

This can cost the debtor 10 times the price of a standard bankruptcy, Palmer said. And an attempt to get free from student loans can easily cost $20,000 to $30,000 in fees — which still may not work. Also, said Palmer, it’s critical to remember that declaring bankruptcy is hardly easy, nor does it erase all a family’s problems.

“Many of my clients have so much they still need to end up paying after bankruptcy, my counseling is often to ask, ‘How will you be better off?’ In some cases, they are really in a terrible spot … really still pretty well screwed after the bankruptcy.”

In 2007, Michigan Professor John A. E. Pottow wrote the definitive history of the issue in an academic paper, “The Nondischargeability of Student Loans in Personal Bankruptcy Proceedings: The Search for a Theory.”

“This is harsh and dramatic treatment, and it is worthy of scholarly attention,” he wrote.

Pottow dispensed with most operating theories using data – that bankruptcy encourages students to commit fraud, or that Uncle Sam is merely protecting taxpayers, for example. He ultimately suggested some kind of income-contingent test, which ties bankruptcy eligibility to a calculation that takes into account school costs and potential post-school income.

“In addition to being attractive theoretically, income contingency could also help a troubling trend,” he wrote. Apparently certain “sub-prime” schools target a financially vulnerable client base by upselling classes and educational programs of dubious worth, confident that they will have repayment leverage through non-dischargeability in bankruptcy. An income-contingent approach might dry up this unwelcome market.”

More recently, in a 2012 report, the Consumer Financial Protection Bureau called on Congress to make bankruptcy available to some student debt holders.

“(It would be) prudent to consider modifying the code in light of the impact on young borrowers in challenging labor market conditions,” CFPB director Richard Cordray said.

Palmer, the bankruptcy lawyer, noted giving such debtors a fresh start wouldn’t only help former students. College debt has been tied to delayed household formation, which can have a domino effect: Young graduates may get married later, start families later, buy homes later, and so on. (If this sounds like you, here’s how to tell if you’re ready to shop for a home.)

Other critics have gone even farther.

David Graeber, author of the book, “Debt: The First 5000 Years,” says the punishing student loan situation is wrecking a generation, and by extension, its future.

“If there’s a way of a society committing mass suicide, what better way than to take all the youngest, most energetic, creative, joyous people in your society and saddle them with, like $50,000 of debt so they have to be slaves?” he said at a talk in 2013. “There goes your music. There goes your culture.”

Bob Sullivan is author of the New York Times best-sellers Gotcha Capitalism and Stop Getting Ripped Off. His stories have appeared in The New York Times, the Wall Street Journal, and hundreds of other publications. He has appeared as a consumer advocate and technology expert numerous times on NBC’s TODAY show, NBC Nightly News, CNBC, NPR’s Marketplace, Terry Gross’ Fresh Air, and various other radio and TV outlets. He helped start MSNBC.com and wrote there for nearly 20 years, most of it penning the consumer advocacy column The Red Tape Chronicles. See more at www.bobsullivan.net. Follow Bob Sullivan on Facebook or Twitter. More by Bob Sullivan 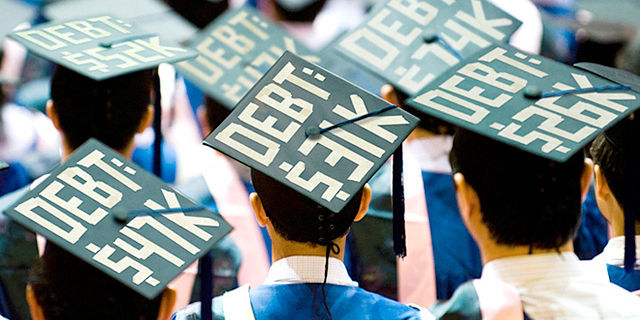