Astronauts Took Seeds to the Moon, Here’s Where You Can Find Moon Trees in the U.S. 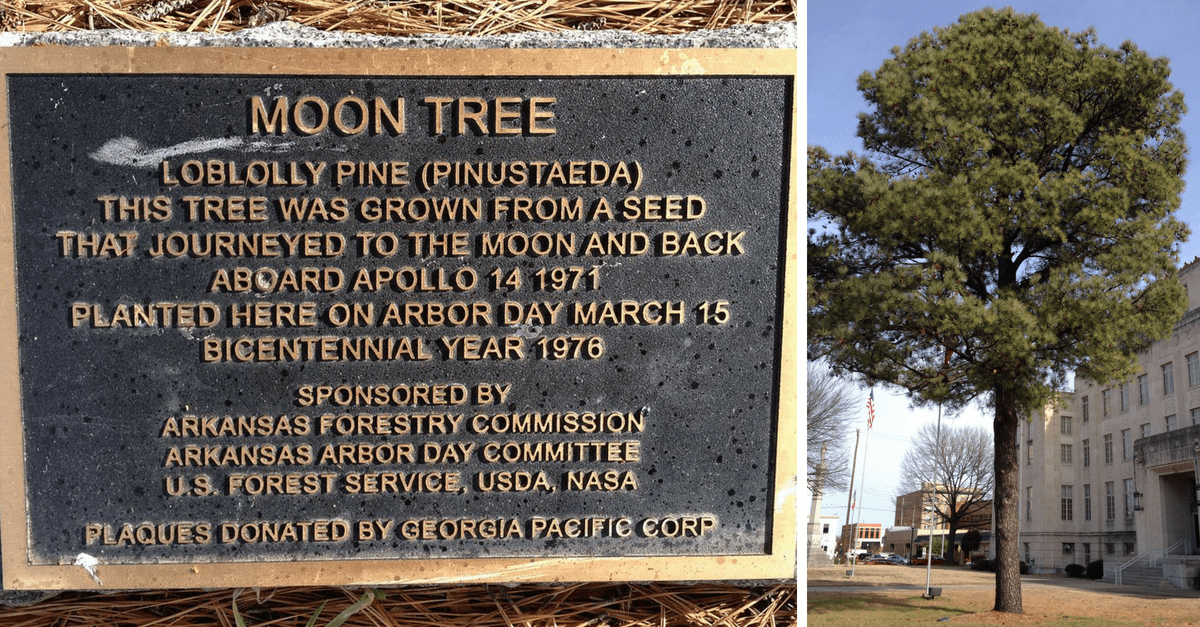 Not even a year after the nation was swept up in the drama of the Apollo 13 mission, Apollo 14 launched on January 31, 1971. The nine-day mission was fairly routine for lunar landings, with one exception: the 500 seeds that Command Module Pilot Stuart Roosa carried onboard. These seeds, which orbited the moon but never touched its surface, were brought back to the United States with the intent to distribute.

And distribute they did. About 420 to 450 saplings germinated and were sent all over the United States to be planted, just in time for the nation’s bicentennial celebrations in 1975 and 1976. The only problem? Such poor records were kept back then that now, only about 88 moon trees are confirmed today. It’s true, you could have a moon tree growing in your backyard.

Why take tree seeds to the moon?

It all begins with astronaut Stuart Roosa’s surprising past. As a former U.S. Forest Service smokejumper, one of the wildfire firefighters that are deployed via parachutes to remote areas to beat back the wildfires blazing, he had connections to the Forest Service. When the Chief of the Forest Service, Ed Cliff, heard about Roosa’s position on the Apollo 14 mission, he had an intriguing idea. Why not take about 500 seeds along with the mission? The NASA experiment used loblolly pine, sycamore, sweetgum, redwood, and Douglas fir seeds.

Since Roosa himself manned the module as Commander Alan Shepard and Lunar Module Pilot Edgar Mitchell made their lunar landing, he was able to orbit the moon with the seeds in tow. When the crew landed safely nine days later, the seeds were sent off to two Forest Service stations: one in Gulfport, Mississippi and one in Placerville, California. The seeds germinated and about 420 to 450 seedlings came to fruition after a few years. This is where the history of moon trees gets tricky to follow.

A loblolly pine was planted at the White House, and perhaps most famously, the moon tree in Washington Square in Philadelphia. The above photo features George Vitas of the US Forest Service next to the sycamore planted in Philadelphia. There’s one planted at the Goddard Space Flight Center in Maryland, and one in Cannelton, Indiana. The planting of the trees was so significant at the time that President Gerald Ford stated that the trees were a “living symbol of our spectacular human and scientific achievements.”

Where can you find moon trees today?

In the 1990s, Dave Williams, a NASA astronomer with an itch to find the moon trees, began to put together a database of the confirmed moon tress across the United States and abroad. Because interest in the moon trees faded almost as quickly as they were planted, there were no real records detailing the location of these special saplings. Though we’ve lost moon trees over the years, namely one in Hurricane Katrina in New Orleans and one at the Kennedy Space Center during Hurricane Irma, it’s believed that there are still hundreds of undocumented moon trees out there.

As Williams told Wired, a third grade teacher reached out in 1996 asking about a moon tree in Indiana at the Camp Koch Girl Scout Camp. He asked around and as it turned out, “No one around here had ever heard of it. This is such a neat story and no one seems to know about it.” Since then, he has updated the moon tree records on the internet. Second generation moon trees are making their rounds now, and you can even buy related half-moon trees online.

If you come across any trees you believe could be moon trees, NASA urges you to reach out to Dr. David Williams, the author and curator of this list.