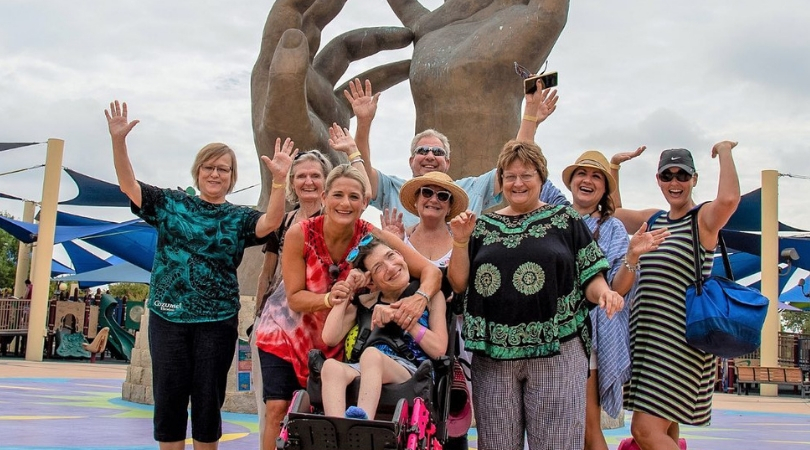 As a society, we seem to be moving to a more sensitive place. Corporations are being called out for the causes they support and how they are treating their employees. Beauty and fashion brands are dragged daily for not including enough shades in their products. But what about things in the real world that fall outside of marketing and screened media? Nonprofit theme park Morgan’s Wonderland is making leaps and bounds in the name of the special needs community. They pride themselves in being a place “Where Everyone Can Play.”

A Texas father created the amusement park for his daughter with special needs in 2010. Gordon Hartman sold his business to build the park in San Antonio after seeing his daughter and some of her friends at the swimming pool unable to communicate with other kids. He realized that shouldn’t have to be that way and decided to do something about it. In addition to a personal $1 million, Morgan’s father raised $30 million dollars and used it to build Morgan’s Wonderland, a theme park designed completely with the necessities of special needs individuals at the forefront of the process.

There were no corners cut and no expenses spared for the wonderland, so many needs were considered. The park has an easy to understand layout and other special needs focused features like the spacious wheelchair ramps to every part of the park and a sensory village. Gardens, a lake, amphitheater, and a large event center. There are also many rest and picnic places spread throughout the park.

Technological assets were also included in this modern play space. Tracking bracelets and crowd control are a few of the other inclusive assets at Morgan’s Wonderland. To make it even better, there is free admission for individuals with special needs and family members, friends, or caretakers only have to pay $5 to get in.

Although he was motivated largely by his daughter, Hartman sees the impact he has had on the community. He says: “The best thanks is when these kids come up to me and hug me and say thank you and they don’t even have to say thank you, you can see it in their eyes”.

In 2017, Morgans wonderland expanded with a splash park called Morgan’s Inspiration Island. There are five splash pads, all tropical themed with sea creatures and yes, of course, they are also wheelchair accessible. Morgan’s Wonderland is a staple in the Wonderland, Texas destination with educational and fun attractions for young special needs individuals. Visit their website here.