Mother Shares Chilling Photo After Going Down Slide with Toddler 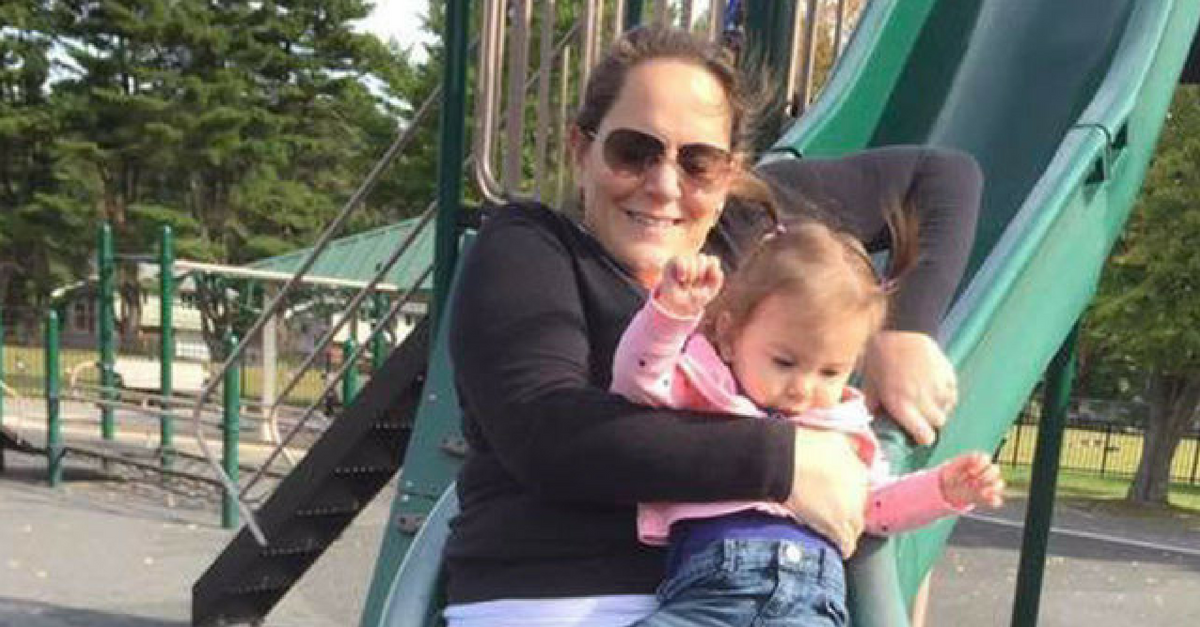 A photo went viral on Facebook this week, after Heather Clare, mother of two, shared her experience while at a New York park in 2015. The photo shows the Long Island mother and her daughter Meadow, going down a playground slide together.

What most don’t notice is the way Meadow’s foot is caught on the side between her mom and the slide, causing her tibia and fibula to snap. Clare thought there was no harm in putting her 1-year-old (at that time) in her lap, but was frightened after she heard Meadow’s sharp cry.

As a way to warn parents, Clare posts a PSA to her Facebook every year about the danger of going down a slide with young children on their lap. Through her post she comments, “This picture is the moment her leg was breaking. She’s still smiling…because it was happening at this exact moment.”

After Clare rushed to the emergency room, she was surprised to learn that the injury was more common than one thinks when it comes to public playground accidents.

According to the Centers for Disease Control, every year emergency departments treat more than 200,000 children ages 14 and younger for playground injuries. More than 20,000 of these children are treated for traumatic brain injury, including concussions.

The scariest part? These aren’t even half of the injuries reported daily! There have been reports of internal injuries, limb mutations, cuts, crushed limbs, and more.

Clare hopes to help families all over, by checking twice and making sure their children are secure before going down a slide or use any playground equipment.

In her PSA, she wrote,

“When we went to the ER, the super empathetic doctor lectured me on how common this injury is. I had no idea. I thought everyone took their kids down the slide. I strongly feel every playground should have a warning sign, but since I’ve never seen one (and we go to A LOT of playgrounds), I share this picture every year in hopes that the pain Meadow felt and the guilt that I still feel will save other babies and parents from the same.”

Clare’s Facebook post has been shared more than 80,000 times. As for Meadow, the now three-year old has made a full recovery since the accident at Heckscher Park, but spent four weeks in a cast following her injury.

The best thing to in any park situation is to always be prepared whenever you take your children to play. From adult supervision, to basic first aid, here are a few playground safety tips to help you avoid any accidents:

1. Check the playground has soft material under such as sand, mulch, pea gravel, or wood chips.

2. Read playground rules or signs and use the equipment that is appropriate for your child’s age.

3. Look at your surroundings for trip hazards or sharp objects such as broken glass.

4. Check any playground equipment or objects surrounding the area that may cause your child to stumble, such as rocks, sharp edges or tree stumps.

4. Check the guard rails, make sure they are in good condition to prevent falls.

5. If using the trapeze bars or exercise rings, make sure you are under your child to avoid him/her from falling to the ground and hit the hard surface.

6. When on the swing sets, make sure your child is holding on to both sides to avoid slipping off.