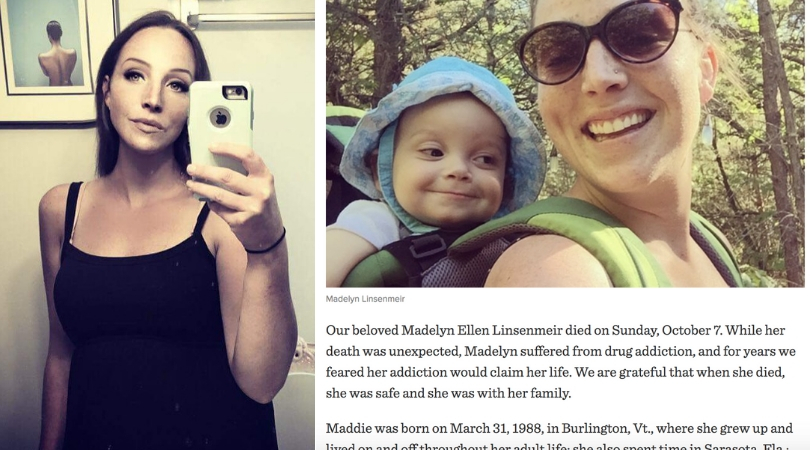 A moving obituary for a mother is going viral, after her encounter with opioid addiction and the struggles the family has faced coming to terms with her death. Madelyn Linsenmeir died unexpectedly on October 7, 2018, surrounded by her family. The family decided to create an obituary for Linsenmeir writing about her years-long struggle with addiction, that ultimately took her life in hopes to help anyone going through a similar situation.

The mother’s obituary has made its way around the internet, prompting social media users to send comforting messages to the family, and think differently about drug abuse. Several users have been sharing their own personal stories about the dangers of addiction and giving them their condolences.  But for the family, they were only trying to honoring the 30-year-old mother that they remembered as ?war and fearless?. The family described her as a ?born performer? who loved to dance and sing, and an athletic woman who loved to ski, snowboard and swim.

?It is impossible to capture a person in an obituary, and especially someone whose adult life was largely defined by drug addiction. To some, Maddie was just a junkie ? when they saw her addiction, they stopped seeing her. And what a loss for them. Though we would have paid any ransom to have her back, any price in the world, this disease would not let her go until she was gone.?

According to the family, Linsenmeir first began using opioids at the age of 16. She tried Oxycontin for the first time at a high school party after she moved from Vermont to Florida, and began her relationship with the drug. Opioids are a class of drugs that include heroin, synthetic opioids such as fentanyl. Pain relievers are available legally by prescription, such as Vicodin, Oxycontin, codeine, morphine, and more.

The mother struggled with sobriety several times throughout her life, but after the birth of her son Ayden in 2014, she worked hard to turn a new leaf. The family wrote, ?Maddie loved her family and the world. But more than anyone else, she loved her son, Ayden?Every afternoon in all kinds of weather, she would put him in a backpack and take him for a walk ? she so loved to snuggle him up, surrounding him with her love.?

Ultimately, Linsenmeir relapsed and lost custody of the toddler, making her loss ?unbearable?. According to relatives, the past two years were the hardest for Linsenmeir as the ?darkness? of the disease led to ?pain and shame?. However, the family held onto their last memories, which were the 12 days she spent sober with her family over the summer. The family believed she would ultimately overcome the disease and make a new life for herself, the way they knew she deserved.

Unfortunately, Linsenmeir addiction ?brought her to places of incredible darkness,? which “compounded on itself” as each ?unspeakable thing that happened to her and each horrible thing she did in the name of her disease exponentially increased her pain and shame,? the obit added.

49,000 people died in 2017 from opioid overdoses. This number does not include people like my sister, who died a week ago tonight not from an overdose but a staph infection that bloomed throughout her body as a result of IV drug use. The term opioid epidemic has been used to the point of non-meaning, and the response to it has been equally meaningless. But this is what the opioid epidemic looks like. It has freckles and a dimple on its right cheek. It is 30 years old and has a singing voice so beautiful people stop in the street to listen. It has a son, two sisters, a mother and a father. Its name is Madelyn Ellen Linsenmeir. This is what the opioid epidemic looks like. ——————————————— There’s a link to Maddie’s obituary in my bio if you’d like to read it; a memorial service for her will take place Sunday, October 21, at 2:00 at the First Unitarian Universalist Society sanctuary at the top of Church Street in Burlington.

Her sister, Kate O?Neill, shared photos of the mother in happier times, with a powerful message to others.

The obituary ended with words of encouragement to those suffering from the disease, urging readers to educate themselves about the terrible addiction and shaming readers of theri judgment. The family believes the mother’s addiction was not a choice or a weakness, but a struggle that was too heavy to handle.

The family is asking that in lieu of flowers, people consider making a donation to Turning Point Center, which is a place where Linsenmeir felt supported and spend most of her time.

You can read her full obituary here.