Homeless Man is Reunited with His Family After Almost 20 Years 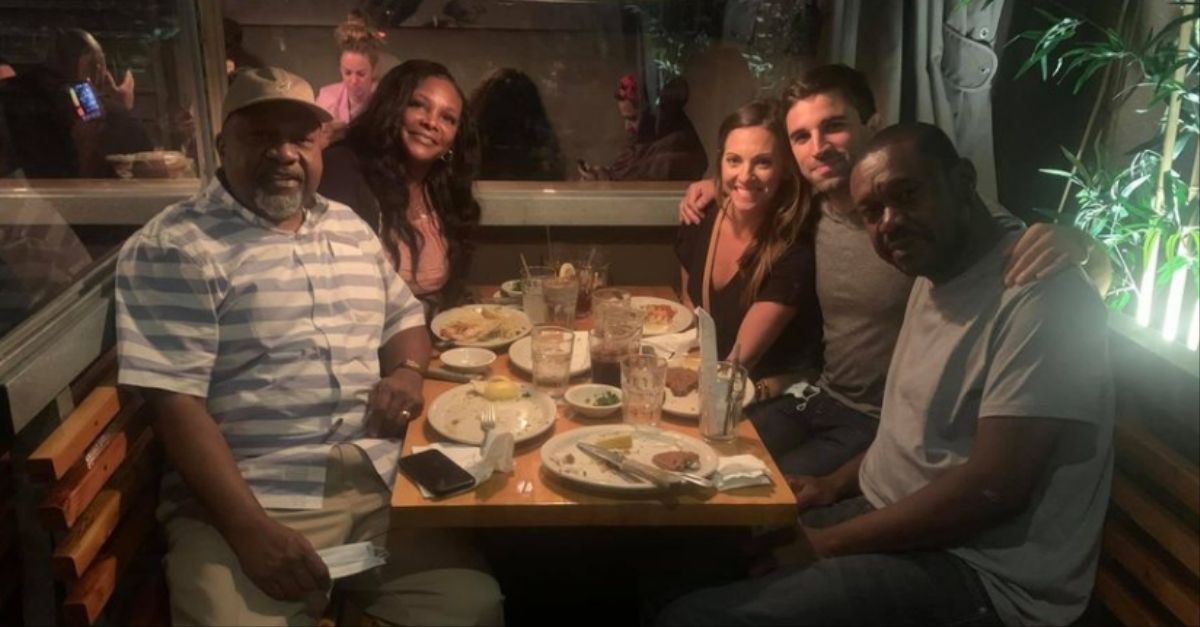 Everyone knows the saying, “Never judge a book by its cover,” and in stories like this one, the truth of that statement has helped changed a man’s life after almost 20 years.

In Los Angeles, California, 33-year-old Randi Emmans was walking her dog outside of her apartment when she heard a man talking to himself. Pedro Reid was talking into the abyss of nothing, saying things like, “Everyone just stares at me. I’m an educated man, but all they see is a person who doesn’t have a home and doesn’t have anyone to call,” inferring that he was homeless. With her curiosity peaked, Emmans went and got her boyfriend, 34-year-old John Suazo.

The couple struck up a conversation with Reid, who was more than happy to talk with them since no one had ever really asked before. They were impressed with the way he talked and the conversations they were having with him, leading them to learn more about his story and how he ended up on the streets.

Thank you @goodnews_movement for sharing the story about our journey with Pedro “Franklin” ❤️ Repost @goodnews_movement with @get_repost ・・・ (Los Angeles, Ca): Randi and John got to talking with Pedro, who lived outside their building. Pedro, who was experiencing homelessness, hadn’t seen his family in 20 years— with his permission, the couple researched and tracked down his family and raised funds not only for a reunion but to help get him back on his feet. This incredible story comes from amazing GNM followers @randiemmansbailyn @suazozulu and @projectbackpacks

Back in 1999, Reid had move to Los Angeles from Charleston, South Carolina to go live with his aunt. However, after a year of getting caught up with drug and alcohol addictions, he ended up homeless. Soon, almost 20 years went by, and Reid was really losing hope that his life would ever change.

He didn’t want to stay in shelters because “they were worse than the streets,” but while being in and out of jail, he would use that as opportunities to call home and send letters to his grandmother’s house. But his family had a difficult time trying to find him, since he didn’t have an ID and would use the name Franklin Mitchell after one altercation with police officers. Without an ID, he couldn’t get a job and the cycle of getting arrested for petty crimes such as theft to support himself was difficult to break.

However, whenever he would get a newspaper, he would make an effort to read it, ?I read the newspaper every day if I could get my hands on it,? he had said, ?Being an avid reader has enabled me to speak articulately.?

Getting to know Reid moved the couple to want to help him find his family. Reid gave them the only information he knew: a few names and his grandmother’s address, hoping she was still there and alive. The couple searched relentlessly for Reid’s family members, calling many wrong numbers until they reached Reid’s uncle’s ex-wife.

The following story began with us giving this gentleman a backpack… For everyone who followed along with us on Franklin’s (real name Pedro) journey and to everyone who donated… thank you! We were able to help reunite him with his family last night. His cousin and uncle flew in last evening and will be headed back to Charleston, SC today to start this new chapter in his life. For anyone who is new to this story, Franklin was a homeless man outside of our building who we got to know in the past couple of weeks. He is so smart and kind and all he wanted was to be reunited with his family. John and I searched the internet and John was able to find a phone number to a family member. He and his family hadn’t spoken in over 20 years. As soon as we told them we had found him they said they would get on a plane because they too had been searching for him for the last 20 years. We raised money and got him into a hotel, got him fresh clothes and shoes, food and other essentials. Please when you see someone on the street don’t look away if they say hello. It’s what he said made the difference to him every day- the people that acknowledged him kept him going and made him feel like someday he wouldn’t be so lonely. He touched our hearts forever and we’re going to miss him. We cannot wait to see what this chapter holds for him. #projectbackpacks #LA #homeless #homelessinLA #giveback #helpothers

Reid’s uncle, 59-year-old Pierre Grant, called back after receiving a call from his ex-wife. Grant told the Washington Post, ?John started telling me about what took place between them and Pedro, and I knew immediately he was talking about my nephew. For over 20 years, we had been praying and believing that one day we would find him, and the day finally came. This is a miracle.”

After testing negative for COVID-19, Grant flew from Charleston to Los Angeles. Before Emmans and Suazo had found Reid’s family, they had helped him clean up, giving him a backpack full of food, water, and other essentials that Emmans had brought from the charity, Project Backpacks, that she started to help provide for the homeless during the holidays. She also reached out to others in a public Facebook post, asking for donations, which led to the couple raising $6,500 to put him in a hotel for a week, get him a cellphone, and buy some new clothes.

?The funds also covered Grant’s travel expenses, as well as Reid’s cousin, Mia Green’s, travel from Atlanta to Los Angeles. Thankfully, they all tested negative for the coronavirus.

Soon enough, on August 7, they were all reunited. Reid was in tears as he and his cousin and uncle embraced each other for the first time in more almost two decades. They spent the night in Hollywood and had dinner with Emmans and Suazo, before returning back to Charleston where Reid will now live with in the family home. Unfortunately, he was devastated to learn that his grandmother died last year.

Reid has also made contact with his mother, 69-year-old Deborah Reid, who lives in Converse, Texas. She will be in Charleston soon, when things are safer for a bigger family reunion. ?I prayed for him every night,? she said, ?For years I was thinking he died, and no one knew.?

Reid is ready to start a new chapter. At 54-years-old, he hopes to use his story to bring awareness to the realities of the life of a homeless person. He wants to further his education, which ended just after high school, and find a job.

Watch: Woman Buys Out Payless Store and Gives Shoes to People In Need