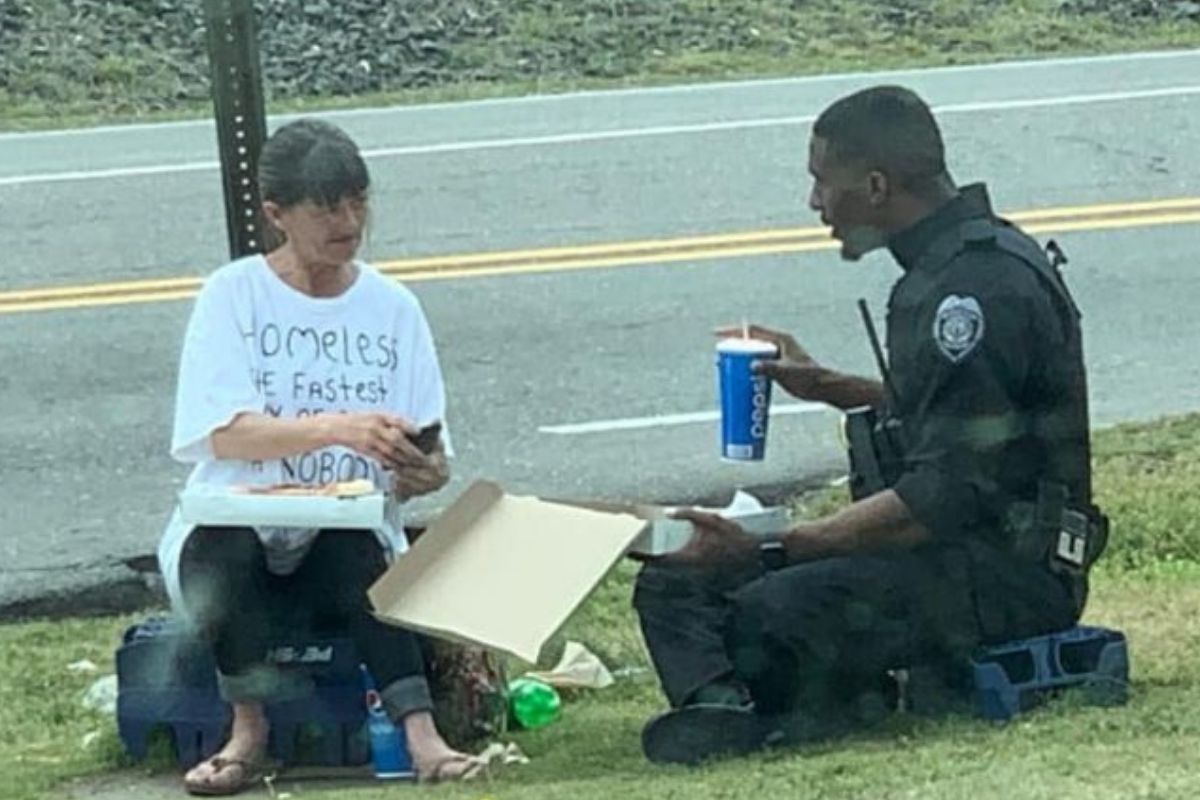 A police officer from the Goldsboro Police Department is captivating the hearts of millions for his sweet sweet gesture. Officer Michael Rivers from North Carolina was roaming around when he came upon a homeless woman he hadn’t seen before. The woman was wearing a shirt that read, “Homeless. The fastest way of becoming a nobody.”

The 29-year-old officer then decided to do an act of kindness and bought her lunch after he asked if she had eaten and she said no. So, he grabbed a pepperoni and cheese pizza from a nearby pizza shop and just sat down on the grass right next to her. According to Rivers, the pizza they shared was great, but their conversation was even better.

For 45 minutes, Rivers and Michelle, the homeless woman was able to share a heartwarming moment. The officer quickly went viral after a passerby saw them, and shared a heartwarming photo on Facebook. The Facebook post notes, “Law enforcement does so much for our community, with a lot of it going unnoticed. We see you Goldsboro P.D. Keep up the good work.”

The North Carolina police officer stated when they were sharing their life stories, Michelle told him she had a 12-year-old daughter who is currently battling liver disease and is in foster care, and has a 23-year-old son. Her husband is also homeless and usually stands across the street from her. After their lunch, the duo went their separate ways, but the officer stated their interaction made him realize that he and Michelle were similar in how they are seen by society. Meaning, homeless are often shunned by people and blamed for “bringing hesitation upon themselves.”

Meanwhile, the officer feels that police are often portrayed as a “negative light” as society focuses on them being the bad guys. Rivers stated, “homeless people are just people who are down on their luck. It can happen to anybody.” He also noted he decided to become a cop not because he wanted to ruin a person’s day, rather to help people and make them smile by making them feel safe.

Police Chief Michael West saw the picture circulating on social media and applauded the kind office for his good deed. Speaking with CNN, West stated, “The circumstances around our job are often an unpleasant call to service, but this picture just shows we’re human like anyone else, and any chance we get to serve the community and help people, we take that chance. I’m very fortunate to have Officer Rivers in our department.”

Editors Note: This article was originally published on March 13, 2020.